Two LED-based lighting installations, one at the Rockefeller Center in New York and the other a touring art project, demonstrate different ways to use controllable, intelligent LED lighting. 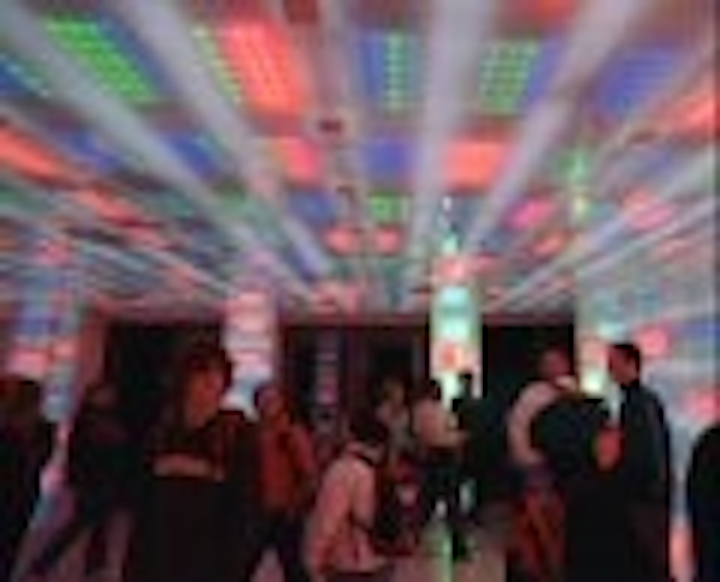 Rockefeller Center, New York On the top-floor observation deck of the Rockefeller Center in New York, a unique, interactive space has been created with the use of intelligent LED lighting supplied by Color Kinetics. Cameras track individual visitors as they move within the space, and signal the LED fixtures to create a series of individual colors and patterns.

Conceptualized by Electroland of Los Angeles, the Target Interactive Breezeway has intelligently controlled LED light fixtures on all its surfaces. Each pixel in the "intelligent skin" is composed of four iColor Cove MX units, tightly grouped. These groupings are located in all available wall and ceiling surfaces, behind translucent glass and backlit by white LED strips. Approximately 1,300 units are employed in total.

Data from four stereo video cameras is combined to locate and individually track up to 30 separate visitors as they enter and walk around the space. Upon entry each visitor is automatically assigned a “personality” by the 3-D tracking system and is in turn followed by individualized light colors and patterns.

The units receive power and data from compact Data Enabler devices, which eliminate the need for low-voltage power supplies. The unmistakable Target brand is represented by bullseye logo light fixtures integrated within the interactive pixel array.

Electroland partner Damon Seeley said, "Color Kinetics’ LED-based fixtures were the only technology that could effectively deliver the full RGB spectrum in a small package, while keeping power consumption to a reasonable level.

"With support from Color Kinetics we developed our own custom software for controlling the fixtures. Our application sends UDP packets directly to the bank of Data Enablers to generate patterns in the intelligent skin."

View the installation in action at http://electroland.net/qt_target_rock_vs02.html

UK-based HSL has supplied all lighting, rigging and staging for the acclaimed Whiteplane 2 project, a live interactive performance-art installation tour using an atmospheric mix of sound and light.

Whiteplane 2, created by experimental artists Alex Bradley and Charles Poulet, immerses its audience between two horizontal planes of light, one in the floor and one in the ceiling. Each plane contains 30 PixelLine LED fixtures from James Thomas Engineering.

Audience members enter the space and sit, stand or lie between the two planes of light, which change colour and intensity as the piece unfolds.

In the floor the PixelLines sit below this a special Perspex mesh, while for the ceiling they shine through a standard rear projection screen stretched taught with bungee cords.