Osram Opto has provided LEDs to light signage at Icahn Stadium, Tryka's modules are illuminating Signapore's Jewel Box, and a new sculpture in Norwich is lit with LEDs. 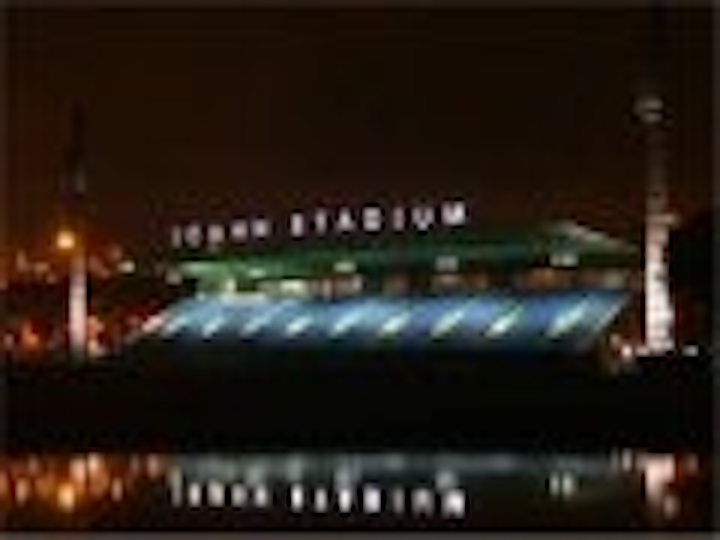 Osram lights Icahn Stadium sign In New York, a major renovation of the famous track and field stadium on Randall’s Island has exploited more than 2600 white Golden Dragon LEDs from Osram to produce its larger-than-life signage. The LEDs will be used to pick out the site’s new name -- the Icahn Stadium, after the benefactor that contributed $10 m to the refurbishment project -- in block letters some eight feet tall and nine inches deep.

The bold signage is intended to create a new icon of the Manhattan skyline. The letters had to be bright enough to light up Manhattan’s East River and FDR Drive, while also meeting requirements for good reliability and minimal maintenance. In the end, the choice was between conventional fluorescent lighting and high-power LEDs.

To decide between the two, prototype samples of both technologies were installed on site, and then viewed from the East River. The LEDs were chosen because the colour output was demonstrably more vivid and powerful, and less “pink” than the fluorescent lighting. Osram’s Golden Dragons also have a rated lifetime of 50 000 hours, compared with 10 000 hours for fluorescent lighting, and the current levels required for the lettering is just 75 A -- while the fluorescent version would have required 150 A.

Australian light consultants Lightbox have exploited LED modules from Tryka of the UK to achieve colour-changing illumination of a cable-car station on Mount Faber, a major tourist attraction in the hills overlooking Sentosa Island in Singapore.

The cable car takes visitors through some spectacular sites in one of Singapore’s few remaining green belts, and Lightbox chose to light the building with different colour combinations to represent winter, spring, summer and autumn.

Tryka’s Singapore distributors RGB Dynamics achieved the desired effect with 36 strip modules with 25 optics, together with modulation drivers. These luminaires have an IP67 rating for outdoor use, and feature a combination of red, green and blue LEDs to produce a full range of colours. Different optics are also available to control the direction of light output.

“We chose Tryka luminaires for their intense colours, superb DMX response and rich colour combinations,” said Erwin Sore, technical director of RGB Dynamics. “The IP67 rating was also important, as the fittings are exposed to the elements and subject to a variation in temperature.”

The coloured illumination can be seen from quite a distance, helping to guide visitors as they approach the cable-car station. As a result, the tourist attraction has now been relaunched as The Jewel Box.

Elsewhere, the dramatic spire on the new Chapelfield Shopping Centre in Norwich, UK, has been illuminated with a selection of LED fittings from the Light Projects Group. The impressive scheme exploits the company’s CFL colour-changing spotlights to light the semi-transparent ovoid, with LEDSTAR3 LEDs at each intersection point in the surrounding helix.

A number of detailed programmed colour schemes can be selected, including themes such as the seasons, the equinox, Christmas and even the colours of the local Norwich football club. The driver unit mixes the light output from each LED to create strong saturated colours, but without the losses associated with conventional filtered light. Full DMX control provides huge flexibility including full dimming capability, activation at any level, and pulse switching.

The 14 m spire for the new 56 000 m2 shopping centre was designed by Rob Olins Architectural Sculpture on behalf of main contractors Lend Lease, and was installed by Alan Dawson Associates.