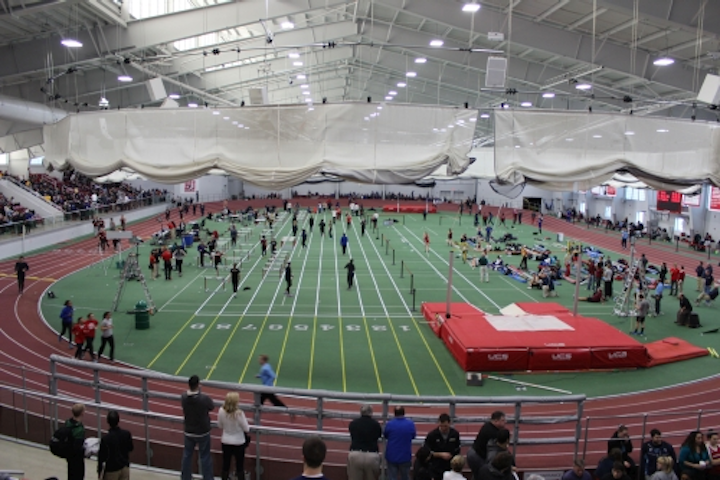 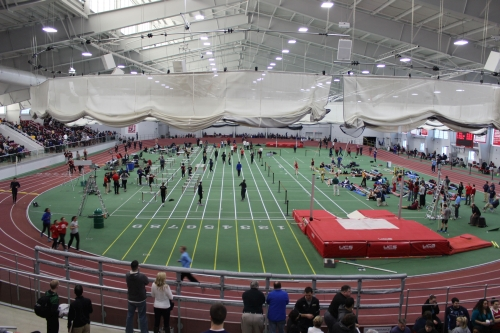 The indoor athletic facility was built in 2002 to host a variety of university events ranging from athletic practices to commencement ceremonies. The legacy lighting consisted of 127 metal halide (MH) fixtures. The university sought to replace the lighting to achieve savings and also to eliminate the annoying buzzing sounds that emanated from the MH ballasts.

"As the ballasts from the metal halide fixtures aged, they created a dramatic buzzing noise that interfered with athlete and spectator concentration," said Elijah Ercolino, the BU director of building automation services. "The new Albeo LED lighting fixtures are noticeably quieter and have cut down noise levels."

Still, the lighting would not have been retrofitted just for the noise concerns. But BU has embarked on an energy-efficiency program called "Sustainability at BU." The campus has experienced a 5% reduction in energy usage since 2006 despite a 14% increase in the size of the facilities. The university kicked off a five-year plan in 2012 to further reduce consumption by 10%.

The university conducted a rigorous evaluation of alternatives for the Track and Tennis Center before settling on the Albeo products. "The benefits extended beyond the energy efficiency of the fixture — we were also fans of the modern aesthetic and exceptional durability for the application," said Ercolino.

The results in terms of efficiency are clear. BU is projecting a savings of 770,000 kWh annually and that's equivalent to a 40% reduction in the center's overall energy usage. The center also has a lighting control system that could enable additional savings with seven-zone control that enable dimming or extinguishing lighting in the zone as the usage pattern allows.

GE rates the fixtures for 100,000 hours of life so maintenance costs should be reduced as well. Moreover, the university said the new fixtures can deliver higher light levels than the legacy lighting. "A lot of students and faculty have already begun to take notice and are commenting on the facility's lighting improvements," said Ercolino.

Both universities and even pro sports organizations are turning to LEDs for better and more efficient lighting. Just a few weeks ago, Ephesus Lighting announced the first LED-lit hockey arena for an NHL team in the Canadian Tire Centre. Moreover, Duke University recently lit its soccer field with LEDs.