LightFair location-services demonstration illustrates how retailers might deploy the technology to increase sales by providing shoppers with assistance in locating items and incentive offers for purchases. 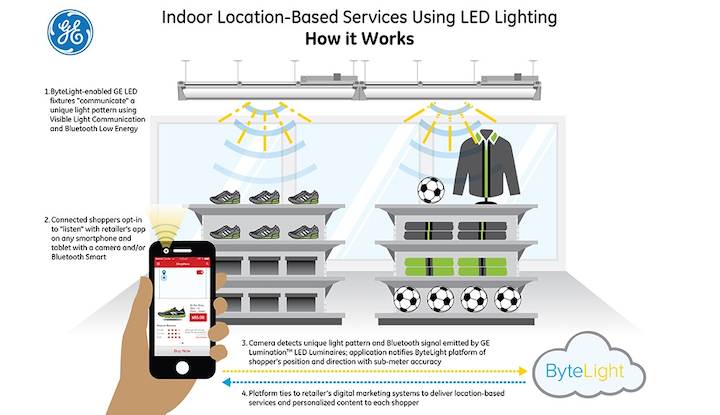 GE Lighting and ByteLight partnered at LightFair International (LFI) on a demonstration of indoor location-based services for retail applications using a combination of GE's Lumination IS Series LED luminaires and ByteLight's iBeacon location-detection platform. The demonstration was the centerpiece of GE's large exhibit at LFI, although the company has not said when it might commercially offer products with the embedded ByteLight technology.

ByteLight announced the indoor positioning system at LFI several years back and the company subsequently received venture-capital funding to develop the technology that provides GPS-like location data indoors. In a typical scenario, an LED lighting fixture would modulate light levels in a manner that is undetectable to the human eye, but the modulation can convey data to a smartphone or tablet via the camera that has become ubiquitous in such products. More recently, ByteLight is augmenting the so called Visual Light Communication (VLC) technology with support for a short-range Bluetooth Low Energy (BLE) wireless RF link that can also connect a fixture to a smartphone in cases where there is a line-of-sight obstacle between the fixture and the phone.

The application for indoor location services could include directions to services in an airport, exhibit information in a museum, and retail. Retail is center stage because the technology can potentially directly boost sales. Shoppers could use a retailer's app on a smartphone to locate merchandise in a large store. And the retailer can offer customized incentives or sale prices to shoppers.

"The use of GE’s LED fixtures for location-based services brilliantly demonstrates how LEDs can go beyond the traditional ROI of energy and maintenance savings to fundamentally change the way people shop by combining data with location," said Jerry Duffy, general manager of global product management at GE Lighting. "ByteLight’s technology ensures a cost-effective approach for indoor location by not requiring additional hardware infrastructure beyond the lights themselves."

Leading up to LFI, ByteLight pointed out that the demonstration at the exhibition was to be based on the same fixture that Walmart is rolling out on its sales floors chain wide. The company didn’t explicitly say that Walmart would deploy the technology, but the implication was clear.

During LFI, GE hosted some roundtable press meetings in which various LED lighting customers participated. One of those discussions included Ralph Williams, Walmart senior mechanical, electrical, and plumbing systems engineer. Williams said the retailer is investigating the location technology in its Walmart Innovation Lab. Moreover, he said the company has documented that 40% of its in-store customers actively used a smart device as part of their shopping process.

Williams could not speculate as to when Walmart might deploy location services. He said that the process would involve more departments within the retailer's organization than LED lighting projects. Williams has been involved with the company's move into solid-state lighting (SSL) that started with 2008 evaluations of outdoor lighting, has now progressed indoors to the sales floor, and will soon include other lighting inside stores in offices and backroom storage.

The fact that Walmart is using the Lumination IS fixtures likely means little in terms of the retailer's adoption plans for location services, despite ByteLight's implication that the technology can be easily added to the fixture. Even GE's Duffy oversimplified the situation in saying that no other hardware infrastructure would be required beyond the light fixtures. In fact, ByteLight's iBeacon technology would have to be added into the fixture in the form of an IC that would be most likely integrated into the driver. The driver would have to be enhanced to handle the light modulation. And realistically the technology only works on fixtures that are networked and Walmart is not presently installing a lighting network in stores.

Still, the indoor location-services application will get plenty of attention given the potential to boost sales. And ByteLight is not alone in pursuing the opportunity. Earlier this year, Philips Lighting demonstrated its in-house-developed location platform at the EuroShop trade fair in Germany. ByteLight claims its platform is superior to the one Philips demonstrated because Philips' approach is based solely on VLC as opposed to the combination of VLC and BLE. There are also approaches that use only RF wireless communications as opposed to VLC.