The US Department of Energy has released a new Caliper report covering LED retrofit lamps sold at retail, and also a focused Caliper Snapshot report specifically on LED-based MR16 lamps highlighting the shortcomings of those products. 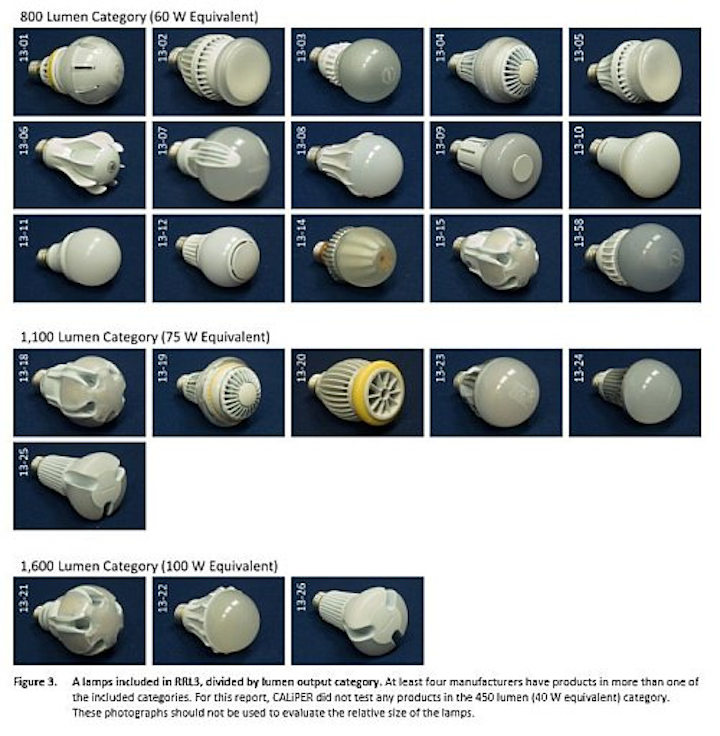 New Caliper reports that have been released by the US Department of Energy (DOE) cover the state of the broad LED replacement lamp segment and the MR16 product class in particular. In the third retail lamps study in recent years, the DOE reported "substantial progress in all aspects of LED lamps" with good options for replacing 60W–100W A-lamps and 75W halogen PAR 30 lamps. The more focused Snapshot report on LED MR16 lamps, however, revealed that few such products could deliver the center beam candle power (CBCP) required for Energy Star qualification. 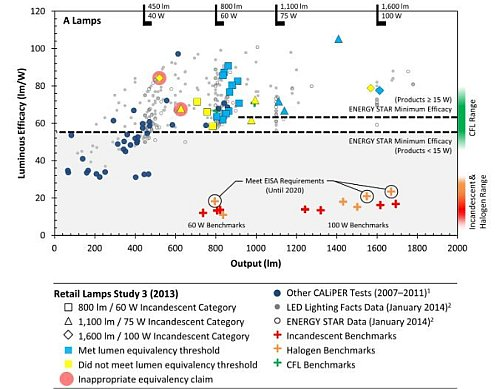 Overall, the recent DOE research makes it clear that a broader transition to solid-state lighting (SSL) technology will not be gated by poorly performing LED lamps. The Caliper research relies on SSL products purchased on the open market and, in the case of the latest Caliper report on lamps, purchased at retail.

The "Caliper retail lamps study 3" covers 46 lamps across A19, PAR30, and MR16 categories. For the latest report, the DOE carefully selected the lamps in the research to "answer specific hypotheses about performance" whereas some other Caliper research has relied on random samples of available products. The DOE said it sought to study LED equivalency, product lifetime claims, price trends, and variations in lamp design and architecture.

Not surprisingly, the report revealed a steady march forward in efficacy. The DOE said that 30% of the products that it purchased in 2013 had higher efficacy than the best lamps tested in a prior round 2 study conducted in late 2011. Maximum efficacy in 2011 was 71 lm/W whereas the best lamp in the recent study delivers 105 lm/W.

Perhaps of greater significance, the new research reveals general improvements of the light quality associated with LED retrofit lamps. The DOE found lamps with warmer 2700K and 3000K CCTs plentiful and noted a trend toward CRI between 80 and 85 across the categories. That color rendering performance is suitable for many applications, although some segments such as high-end retail will need performance above 90 CRI and far fewer such products are available.

Light distribution is also improving. In the A-lamp category, for instance, the DOE said that more products on the market today deliver omnidirectional beam patterns whereas in 2011 most emitted light primarily in one direction. Such semi-directional lamps work fine in some applications, but near-omnidirectional performance is needed for a broad transition to SSL alternatives. 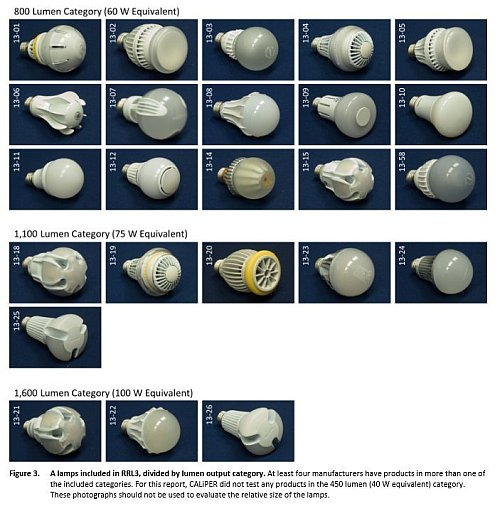 The latest report did note that some claims of equivalency to legacy lamps fall short. Indeed, 43% of the tested products were found lacking in some measure of equivalence and 20% failed to match the manufacturers' published performance specifications.

In terms of reliability and lifetime claims, the story is just beginning. The DOE will perform accelerated life testing of the recent lamps sample. But results from those tests will come in a future retail lamps report.

Moving to the MR16 category and the DOE "Snapshot report on MR16 lamps," the results were mixed. The DOE noted that there are relatively more MR16 lamps with CRI above 90 than in the A-lamp and PAR sectors. That is driven by the wide usage in applications such as retail.

But the report states that few available products can perform equally to a 50W, 12V halogen MR16. The latest test included 13 LED MR16 lamps. Most of the vendors represented in the study don't even publish CBCP relative to beam angle. Only one met the CBCP performance required for an Energy Star-rated 50W halogen lamp at a 40° beam.

The DOE also said that there remain relatively fewer LED MR16 lamps listed in the agency's Lighting Facts program compared to other lamp types. The space constraints of the small MR16 family remain a problem with very little space available to house both the driver electronics and light engine. Those engineering challenges have limited the availability of such lamps.