More than 1000 LEDs will illuminate the night-time viewing of a new NC convention center, courtesy of Cree. 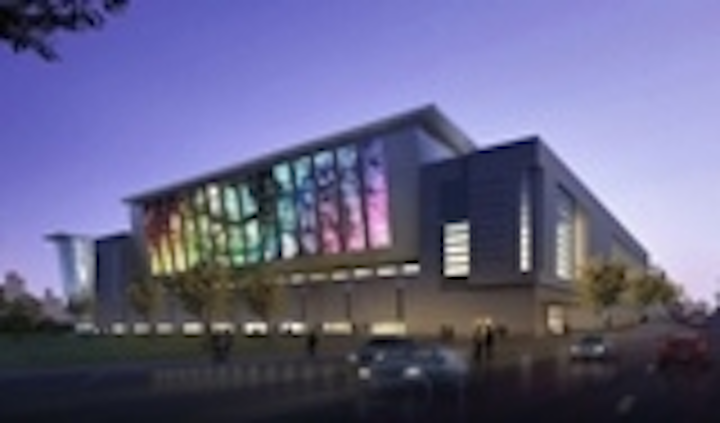 Set to make its debut next month in Raleigh, NC, the shimmer wall art installation measures 211 ft long by 44 ft high (9284 sq ft) and will adorn one exterior wall of the city's new convention center.

No public funds were used to build it. Durham, NC-based Cree Inc., a manufacturer of LED lights, donated $1 million to build the wall.

During the day, the wall will depict an oak tree - used because the city's nickname is "City of Oaks" - that changes shape and disappears as the aluminum squares on its facade flap in the wind.

At night, however, the LEDs will shine, as 1344 LEDs will backlight the wall. The wall will contain 28 fixtures that are 4 feet long, and have 12 LEDs per foot.

There are 14 bays with 2 fixtures per bay, and RGB lens optics are used. The fixture input is 24VDC at ~25 W/ft. The LEDs are controlled by a DMX512 via a data controlled power supply.

The wall's fixtures can be programmed to flash and display more than a million different colors. The LEDs will allow the shimmer wall to display Carolina Hurricanes colors one night, and different shades of green on St. Patrick's Day the next night.

Raleigh was the first city to join the "LED City" program, which is an expanding community of government and industry parties working to promote and deploy LED lighting technology across the full range of municipal infrastructure.

The shimmer wall, whose architect is Thomas Sayre, adorns the McDowell Street side of the new convention center in downtown Raleigh.

The installation consists of 79,464 4-in squares of aluminum that hang on louvers in 4-ft-square grids, enabling them to ripple in the breeze above the 80,000 cars that pass by daily on McDowell Street.

If the shimmer wall were not in place, passersby would be forced to look at a wall covering up the convention center's air-conditioning system. The wall houses the 500,000-square-foot facility's chillers and boilers that require significant air flow, yet it is the most visible wall as motorists enter downtown Raleigh from the south.

The LEDs will not be turned on until the convention center's grand opening on September 4.