Cree’s CR SSL luminaire designs deliver 90 to 110 lm/W efficacy utilizing LEDs that radiate upwards into a mixing chamber and reflector that distributes light through a diffuser. 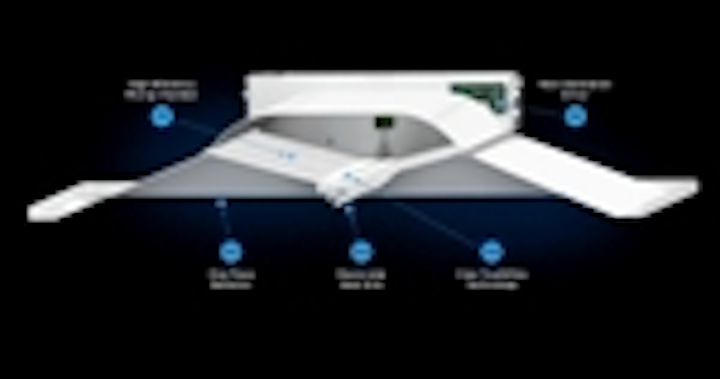 Cree has announced the LED-based CR family of solid-state-lighting (SSL) fixtures that are designed specifically as alternatives to high-end, architectural, fluorescent fixtures in applications such as offices and schools. Delivering 90 to 110 lm/W efficacy, the fixtures, according to Cree, will offer payback inside of one year relative to T8 linear fluorescent fixtures with comparable light output.

The Cree fixture design is quite unique as depicted in the nearby cross-section diagram. The luminaires integrate a heat sink that is exposed to room air for cooling and that appears as an architectural design element of the fixture. The LEDs radiate light upwards into a mixing chamber and reflector and the light is diffused on either side of the luminaire.

Cree is making bold claims about the products relative to fluorescents. Vice President of Market Development Gary Trott said, “Our lowest efficacy product is better than the best 2x4 linear fluorescent fixture available today.” And about the luminaire design, Trott asserts that the optical efficiency for the fixture is 90%.

Trott provided a more detailed assessment of the CR series relative to the most efficient fluorescents that are often referred to as Super T8s. He said the Cree products are 5 to 25% more efficient or can deliver the same light output using 5 to 25% less power.

The luminaires use a single row of LEDs mounted in the center of the heat sink and the brighter output versions utilize a greater number of LEDs. The design uses Cree’s TrueWhite technology that mixes light from yellow and red LEDs to deliver consistent color and the choice of color temperature.

The thermal design allows the LEDs to run cooler than competitive designs according to Cree and the fixtures are designed for 50,000 hours of life. The luminaires include a driver that supports both step and 0-10V dimming.

The luminaires don’t come cheap, but buyers will consider the price relative to energy and maintenance savings and the payback that they project. Trott expects the price to the end user for the CR family fixtures to be in the $200 to $300 range. He said that price is “in line with high-end architectural fluorescents.”

Cree provided an example payback calculation for the CR24 relative to a 2-tube T8 fluorescent. The comparison is based on a rather-lengthy 12-hour usage day and energy cost of $0.10 kWh. Including energy savings, lower HVAC energy usage due to less heat from the lights, and maintenance savings, Cree projects payback inside a year. With a shorter usage day the payback period could grow to 2 years or more.

Cree already has some pilot customers that confirm the payback story. “We chose the Cree CR troffers because the payback calculation was clear,” said Richard J. Michal PE, MBA, LEED-AP, Facilities Engineer Planning Design and Construction, Butler University. “Seeing the CR troffers installed, they have an elegant aesthetic that produces an incredibly high-quality light. When you combine that with our predicted energy and maintenance savings, it was a no-brainer.”

Cree clearly believes that the time is here for broad replacement of fluorescent lighting. “You never need to install fluorescent troffer lighting again,” said Chuck Swoboda, Cree Chairman and CEO. “The traditional lighting experts keep telling us what LEDs can’t do, and we keep showing them that anything is possible. We think it is time to rid the world of the compromises inherent in choosing fluorescent lighting—the flickering, toxic mercury, poor color, ineffective dimming and disposal expense.”

Cree has repeatedly said that its mission in lighting is more to point the way for the industry and boost its sales of LED components. Swoboda emphasized that approach in a speech we covered this past December. Yet these new luminaires are clearly to be sold into volume production.

For now, Cree is not pushing its linear fixtures into the more cost competitive industrial markets where lower-priced fixture are prevalent. That’s certainly one target for the host of companies offering LED-based replacement tubes for T8s. But as the DOE has documented repeatedly in Caliper testing, those tubes aren’t yet capable replacements.

It’s not clear when or if Cree might target that market. Trott noted the complexity of selling retrofit lamps that require rewiring or removing the ballast (see our article on T8 replacements). Trott did say, “In some ways, replacing the entire fixture is easier than rewiring for a ballast and tube replacement and you don’t have a UL problem.” It seems that Cree views purpose-built fixtures a better approach than replacement tubes.