Wireless networks such as Zigbee, wired digital standards such as DALI and DMX, and analog 0-10V dimming can all contribute to energy efficiency and better lighting, says DAVID COOPER. 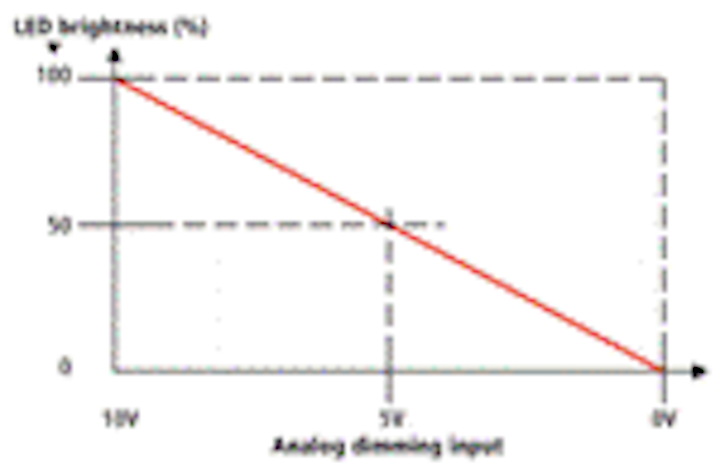 This article was published in the July/August 2011 issue of LEDs Magazine.

View the Table of Contents and download the PDF file of the complete July/August 2011 issue.

LED-based solid-state lighting (SSL) is inherently controllable affording advantages ranging from lower energy consumption to more elaborate control scenarios that deliver the right amount of light when and where it is needed. But product designers face the dual problems of how to design dimming circuits, and how dimming information gets conveyed to the luminaire. In the June issue of LEDs Magazine (p.47), we covered basic dimming technologies and control scenarios that utilize existing AC wiring. Now let’s consider other methods of implementing dimming control through dedicated analog, digital or wireless interfaces, and the type of dimming technology that’s compatible with each.

As we discussed in the last issue, there are two basic alternatives that can be used to reduce the light output of the LEDs: analog dimming and pulse-width modulation (PWM). Whichever method is used, some form of signal is needed to convey the dimming information to the luminaire.

This signal can be carried through the AC wiring, an analog input, a digital input or through a wireless interface (the Table summarizes the scenarios). Each of these options has some advantages and some drawbacks, and different options are appropriate for different applications. In general the formats of the dimming signals are common to any lighting technology – they are not specific to LED lighting. The majority of LED luminaires will be retrofitted into existing installations and they must be able to interact with the existing lighting controls.

Analog dimming, often called 0-10V dimming, is defined in the IEC 60929 (Annexe E) standard, and uses a control wire separate from the AC input to provide the 0-10V dimming signal. The dimmer control – a dedicated 0-10V wall dimmer or a circuit in a control system – acts as a current sink, allowing one signal to control several luminaires/ballasts in parallel. When the dimming input is 10V the output is full brightness, with a linear reduction to zero as shown in Fig. 1. If the dimming input in a luminaire is not used it can simply be left open-circuit and is internally pulled up to 10V.

In a 0-10V scenario, a luminaire can use either a linear control of the output current or a variable PWM output to dim the LEDs. Fig. 2 shows a block diagram of a power supply and driver with linear output dimming. Note that the 0-10V signal controls the LED driver current, not the power supply output voltage which remains constant (24V in this example).

Fig. 3 shows a block diagram of a power supply with analog control that relies on a PWM output for dimming. In this case the 0-10V signal is input to a PWM controller in the power supply that provides a constant-voltage variable-pulse-width output via a MOSFET switch. An LED driver (not shown in Fig. 3) would convert the pulses to constant current and drive the LEDs. A PWM frequency of 200Hz avoids any noticeable flicker of the light output.

Moving on to digital interfaces, the digital addressable lighting interface (DALI) standard is also defined in IEC 60929, Annexe E. The main application for DALI is the control of multiple light fixtures in commercial applications such as conference rooms, offices and public buildings. One DALI interface can control up to 64 devices. All devices on a DALI network are controlled by an electronic control device (ECD), which can also include an Ethernet interface to allow the network to be administered from a PC.

DALI provides comprehensive dimming capabilities based on stored information for different brightness configurations, referred to as scenes. The DALI protocol allows control of brightness and of dimming speed within each luminaire, to coordinate all luminaires on a network and ensure they all react simultaneously. DALI also allows for status reporting from each device to the controller on request, including brightness setting as well as power status, fault information, etc.

For LED lighting in a DALI network, the dimming itself can be achieved through normal PWM control of the LED drive current. The same microcontroller that provides the DALI interface functionality can also provide the PWM signal to the LED driver.

The DMX512 (digital multiplex) standard is defined in ANSI E1.11-2004. Its main use is to control theatre stage lighting, and it can support multiple functions such as pan, tilt, zoom, color and image effects in addition to dimming. A maximum of 32 devices can be connected on one DMX512 line. DMX data flow is unidirectional and does not include any provision for status reporting.

Dimming is normally implemented in one of two ways. The first method uses a specific DMX dimmer unit (called a dimmer pack) that provides several AC outputs into which lights are plugged. Each of the outputs has an internal phase-cut dimmer, controlled through the DMX signals. The second method uses a multi-channel DMX-to-analog converter that provides analog 0-10V outputs for each channel rather than AC outlets. These analog outputs are used to control lighting that can accept a 0-10V dimming input.

Control of LED lighting through DMX could use either method for dimming, but the 0-10V analog method is simpler and allows more complete control.

Zigbee is a digital wireless mesh networking standard based on IEEE 802.15.4-2003. It is intended for applications such as building automation, smart energy and lighting control. One of the advantages of using Zigbee to control lighting is that no additional wiring is needed apart from the AC power. This can be particularly attractive for LED street lighting applications where the intention is to retrofit existing luminaires. A Zigbee network can support dimming during off-peak hours, multi-level dimming integrated with motion sensors, and other intelligent-lighting scenarios. It can also support status monitoring from the luminaire to provide warning of damage or failure, operating temperature, power consumption, indication of brightness level, and other operational characteristics.