Linear modules that use CSP LEDs and a clever reflecting chamber can be surface mounted or safely recessed into any building material such as wood surfaces. 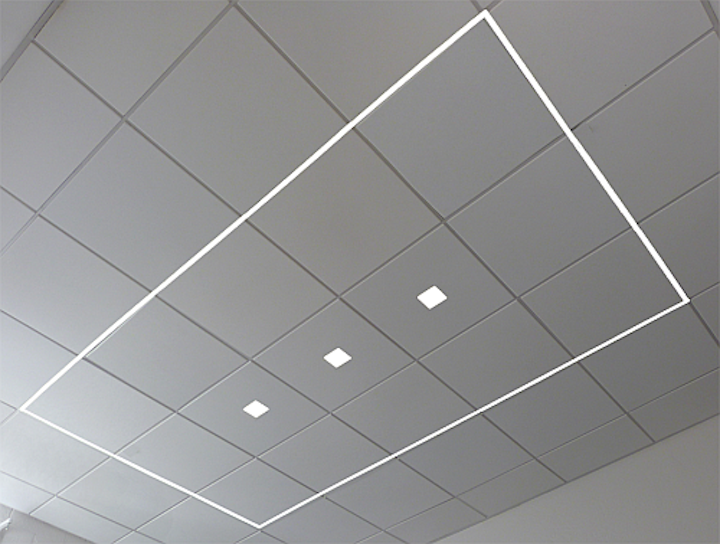 Linear modules that use CSP LEDs and a clever reflecting chamber can be surface mounted or safely recessed into any building material such as wood surfaces.

Goldeneye used LightFair International (LFI) to demonstrate its Airelight solid-state lighting (SSL) system that is module based and DC powered. Moreover, the LED-based linear strips measure only 0.279–0.315-in. deep and can be surface mounted or recessed into common building materials. Goldeneye positions the modular system as a way for architects and lighting designers/specifiers to customize SSL installations in commercial and residential settings with no dependency on traditional luminaire manufacturers.

At LFI, Goldeneye was primarily showcasing linear modules although the company also has developed some square panels. The linear modules are only 9/16-in. wide. The company offers the modules in lengths ranging from 6 to 24 in. 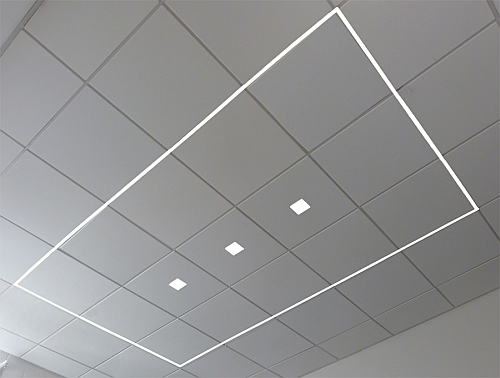 The design is very unique. The illuminating surface is actually ceramic. Chip-scale package (CSP) LEDs are mounted to the underside of the ceramic surface directed away from surface. The ceramic surface also essentially serves as a printed-circuit board carrying power to the LEDs and as a heat sink for thermal mitigation. The LEDs emit light into what is essentially a shallow mixing chamber, and the light is ultimately reflected back to and through the ceramic surface. Goldeneye CEO William Livesay admitted that ceramic was a poor conductor of light but said the light continues to bounce around the mixing chamber until most escapes through the ceramic.

A typical module would utilize nine CSP LEDs connected in series. A 24V constant-voltage driver would provide just-high-enough output to light the string. But the LEDs would operate far down on the IV curve. Vice president of technology Scott Zimmerman said the typical series current is in the 50–70-mA range. In applications that require dimming, Goldeneye recommends a pulsewidth-modulation (PWM) dimmer be placed between the driver and LED module.

The dimming performance of the linear LED lighting on display at LFI was problematic at the low end of the dimming range. Zimmerman said the PWM dimmers can go down to 1%. But as the modules were dimmed, the light output went from a very uniform look along the length of the module at high levels to very evident point sources at low levels. Zimmerman claims the company will solve that issue with a secondary diffuser element.

It remains to be seen whether the Airelight approach will satisfy the discerning eye of lighting designers. With no precise current control, there will invariably be some inconsistency in light output between modules, and in many cases there would be numerous modules used in a room. Goldeneye has done trials with many modules connected in parallel to the same driver and claims to have satisfied users. For information on the tradeoffs between constant-voltage and –current drivers, see our feature article on the topic.

The scheme would also seem to deliver poor utilization of the LEDs with the devices operating at very low levels relative to device maximums. That fact makes for good efficacy, but also means that far more LEDs are used than perhaps would be needed at higher current levels. Of course, with price erosion in the LED component marketplace, the cost of the LEDs have become less of a factor in SSL system design.

The Goldeneye linear LED lighting product is one of the first general-lighting products that we have seen that uses CSP LEDs. Such LEDs are a good match for the design with the ability of direct attachment to the ceramic panel. Moreover, CSP LEDs have a wide beam pattern that reflects into the chamber and results in a lambertian distribution from the ceramic surface.