The Main Street Bridge in Jacksonville has been lit by LED lamps from OptiLED as part of the Super Bowl festivities. 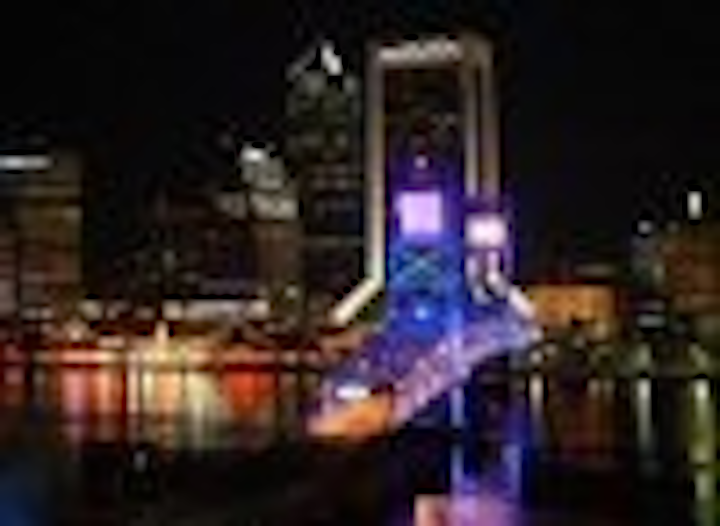 The Main Street Bridge, the centerpiece of Jacksonville's Super Bowl festivities, is sporting state-of-the-art LED illumination as the city gears up for the championship game to be played at the Alltell Stadium on February 6.

The bridge is currently lit 24 hours a day by almost 1,200 feet OptiLED’s Linear Optical Array LED lamps, chosen for their high brightness, their durability to withstand the outdoor elements, and their consumption of 85 percent less electricity than conventional lights.

Lighting design firm Stone Mountain Lighting Group was subcontracted by Miller Electric to integrate, install and program the lights on the bridge. The LED lamps have been assembled together to form an impressive LED matrix for various graphics and designs.

The individual lights work similar to pixels on a video screen and show various pre-programmed lighting effects, such as a unique design featuring the team colors of the Super Bowl winner on Sunday night once the game is completed.

"Since the bridge is a vintage structure, we had to be careful with the amount of extraneous hardware that would need to be attached to it. Plus the optics in the lights provided us with the ideal viewing angle and distribution."

The built-in switched-mode power supply improves data transmission as it avoids the power fluctuations that interfere with data. If one unit goes out, the others in the serial data path will continue to function, making it easier to spot a faulty unit in a long segment.

The project is a joint effort between the JTA, the City of Jacksonville, the Florida Department of Transportation and the First Coast Metropolitan Planning Organization. Spanning 1,680 feet over the St. Johns River, the massive Main Street Bridge, which was completed in 1939, carries traffic traveling on U.S. Rte. 1 and has become a landmark in downtown Jacksonville.

Other current OptiLED installations include the International Spy Museum, CNN Studios in Atlanta, the Houston Ballet, and DollyWorld USA in Tennessee.