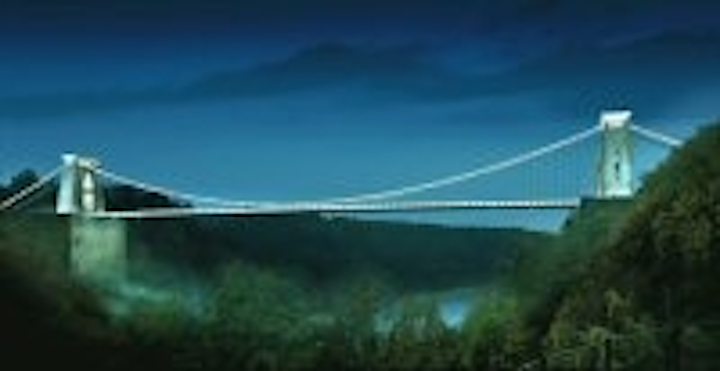 The 140-year old Clifton Suspension Bridge, a famous landmark in Bristol, UK, has undergone a complete lighting transformation in time to memorialize the 200th birthday of its designer, Isambard Kingdom Brunel, in 2006.

The new lighting scheme was switched on during the evening of April 8, accompanied by a spectacular fireworks display (more photos).

Architectural lighting designers Pinniger & Partners developed a lighting scheme with four main elements, one involving the use of LEDs, which serve to emphasize the aesthetics of the bridge, cut down on light pollution and provide a visual connection between the bridge and the gorge below. The whole bridge is now lit with white light.

Advanced illumination of the Clifton Suspension Bridge dates back to the day it opened in 1864, when it was lit during the evening using a new invention - electricity.

The new lighting system replaces polycarbonate tubes containing incandescent lamps, which emitted light indiscriminately in all directions. Bulb replacements and repairs to the system were frequently required; these were hazardous, given the exposed location, and were particularly hampered by wind and rain.

LED fittings, supplied by Crescent Lighting, were chosen to illuminate the chains from which the 214 meter (702 ft) span of the bridge is suspended. The bridge is so old that iron chains, rather than the steel wires used in modern bridges, are suspended between the two 26 meter (86 ft) high towers. Drop rods hang vertically from the chains to suspend the road and pedestrian walkways.

According to Dave Robinson, senior designer with Pinniger & Partners, two LED fixtures are located adjacent to each knuckle (see photo), which is the nut that secures each drop rod to the chain. "The LED projectors illuminate the face of the chain rather than projecting light away from it," says Robinson. At the mid-point between the knuckles, a "double-headed" fixture points in both directions.

The LED fixtures are built around off-the-shelf modules comprising 3 one-watt LEDs. "The modules are in purpose-built housings with input from various parties to make them look as aesthetically pleasing as possible," says Robinson. The fixtures are also fitted with cowls to deflect light onto the chains, and also to cut down glare for pedestrians.

Different types of lighting are used elsewhere on the bridge; for example, a line of linear asymmetric fluorescent lamps has been positioned on each walkway to silhouette the lattice work of the bridge. So why were LEDs chosen for the chains?

"The original brief was to have no electrical components on any part of the chains," says Robinson. He explains that the initial concept for lighting the chains was to use fiber-optics, with light projectors below deck level and fibers running up the suspension rods to light-emitting heads on the chains.

"At that stage, over 3 years ago, LED performance was not sufficiently good, but this has improved significantly," says Robinson. LEDs provided the opportunity to keep power consumption to an absolute minimum, and reliability also influenced the switch to LED technology, he says. "Fiber-optic technology would have required us to change the lamps every 6000 hours, so maintenance costs would have been unacceptably high."

The LEDs have a projected lifetime of 60,000 hours, which should allow the system to operate for a minimum of 20 years, given the limited hours of operation per day. In fact, the fixtures are initially operated at 2 W, or about 60% of their maximum rating, so there is plenty of scope to increase the drive current as the fixtures age.

The LED drivers are located together at the tops of the bridge towers, with cables concealed within the chains and hidden from view. "This provides better access compared with putting the drivers under the bridge deck, and does not affect the appearance of the drop rods," says Robinson. The 12 W drivers each supply 4 LED fixtures.

Making sure the fixtures all produce the same white color was important, but relatively straightforward. White LEDs were supplied from the same bin, but even so there can be slight variations. "However, the output from the LEDs is mixed together and projected onto the chains, so any variation is evened out," says Robinson.

Ex-Or Ltd supplied SceneSelect II, its scene-setting and dimming system, which is employed to control the thousands of LEDs, fluorescent tubes and lamps on the bridge.

The system allows Bridgemaster John Mitchell to summon up a variety of pre-programmed lit displays simply by using a touch screen control situated in the main control office.

For most of the time during the year, the lights on the bridge will come on after dark in a fixed pattern. But for special events, the lights can be set up in a selection of patterns to make dramatic alterations to the lit appearance of the bridge. Rather than having to individually switch on separate lights or groups of lights to create a desired lit scene, it requires just one press on the Ex-Or touch screen control to summon the already programmed scene.

"The old lights were only capable of being switched on or off," said Mitchell. "Now we can summon pre-programmed lit scenes to show off the bridge in different ways. The bridge is an icon so the new lights will enable it to really display its plumage when the occasion merits it.”