Signify provides most of the lighting at Bayern Munich’s iconic Allianz Arena. But fan excitement strips and a sponsorship deal certify Zumtobel as the team’s best buddy. 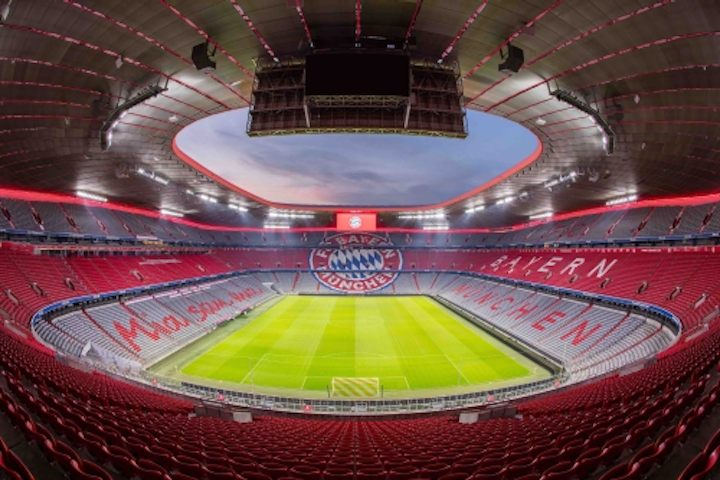 Signify provides most of the lighting at Bayern Munich’s iconic Allianz Arena. But fan excitement strips and a sponsorship deal certify Zumtobel as the team’s best buddy.

Go to a Bayern Munich soccer match at the Allianz Arena, and as you approach the modern outdoor stadium, you might be wowed by its colorfully lit facade, bathed in changeable LED tones from Signify, the lighting company that also illuminates the playing field and even tunes LEDs in team areas to help players relax or to psych them up before a game.

So when the arena and team announced this month that they had dubbed a new official lighting partner, you might have assumed that it was Signify.

But your assumption would be so last year.

Signify is still very much present at the facility, providing not only the iconic LED façade lighting, the ultra-HDTV-friendly field lighting, and the stoke-them-up-and-calm-them-down player lights, but also hospitality, parking, and other fixtures.

For all that, however, Signify is no longer the “official lighting partner,” a distinction it held for some three years starting in 2014 when it installed the colored lights that change the appearance of the distinctive façade and its thousands of inflated 3D diamond-shaped panels. 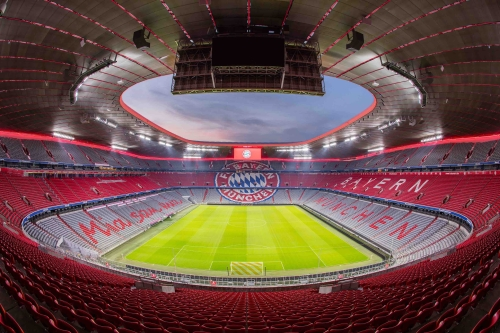 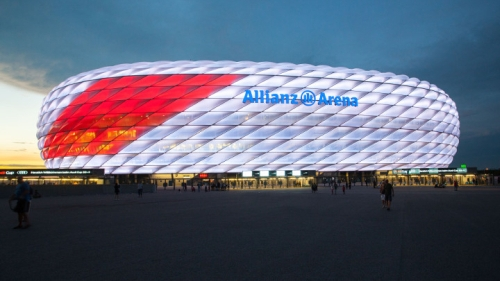 The face of partnership, then and now: The Zumtobel LED strip lighting ringing the Allianz Arena roof and running down its ribs (top photo) are part of what earned it “official lighting partner” status from Bayern Munich, whose former partner Signify continues to furnish most of the stadium lighting, including the field lights and the iconic color changing exterior (bottom).

In a sign of just how many new opportunities there are for illumination in the LED era — of how light can go where no light has gone before — and also perhaps of how much a vendor is willing to pay for sponsorship, Bayern Munich and Allianz Arena’s new officially recognized lighting partner is Zumtobel, the Dornbirn, Austria-based competitor to Signify.

Zumtobel will add razzmatazz to the inside of the 75,000-seat stadium with LED strip lights that ring the open roof and run down its interior ribs, flashing and changing colors to stir up crowd excitement (sports purists will have to look the other way). Red will feature heavily, as it’s the color of the renowned Bayern Munich club, which owns the arena. It’s the sort of thing that modern solid-state lighting (SSL) can do — and that is becoming more commonplace at sports palaces around the world.

Allianz Arena — its full name is Allianz Arena München Stadion GmbH — said in a press release that it hopes to have the Zumtobel LED lights installed and operating by next year, in what it described as the first of three phases of new Zumtobel lighting. In the second phase, Zumtobel will replace 13-year-old fluorescent lighting in stairways that lead from concourse areas to the inside of the stadium with LED spotlights. In the third phase, scheduled for completion in 2020, Zumtobel will replace the balloon-shaped lights in the esplanade area outside of the stadium, which attracts about 3.5 million visitors a year between soccer and other events such as catered indoor functions and parties.

With the deal, Zumtobel becomes the team’s new “official lighting partner,” a distinction that the parties probably factored into the price of the lights and installation, all of which the company is providing by including its Zumtobel Group Services as part of the deal.

No one at Zumtobel or at Bayern Munich was willing to say how much the team is spending — if anything — on the project.

“The stadium of FC Bayern will receive a complete lighting solution from the Zumtobel Group,” a Zumtobel spokesperson told LEDs Magazine. “The service includes the entire project management and project execution, from recording the roof structure, production, delivery, and installation to the commissioning of the systems.”

LEDs asked Signify whether it bid for the job.

“We were approached by them; however, since it involves a sponsorship deal and given the fact that we have already lit up all major parts in and outside the stadium — and even underground — we decided to not further pursue,” a Signify spokesperson said. “A sponsorship could involve different scenarios, including full payment (of the costs by the lighting vendor), or paying for the costs, or delivering products for free, or the installation, or services, or promotional activities. We decided to not pursue this new project in view of the business case and given the fact that we have been lighting the most innovative and prestigious parts of the stadium.”

To this day, Signify still dynamically changes the color of the façade at the Herzog & de Meuron-designed stadium, depending on whether Bayern Munich or the German national team is playing, or to commemorate special days like Christmas and Valentine’s Day.

It will just have to carry on doing so without being the official lighting partner.

Editor’s note:Read about another instance where a professional sports team — the NFL’s Cleveland Browns — anointed an official lighting partner— Cree — when no field lighting was involved, but the emphasis was on the “fan experience.”