Toronto's CN Tower, the tallest freestanding tower in the world, has been fitted with color-changing LED fixtures supplied by Color Kinetics. 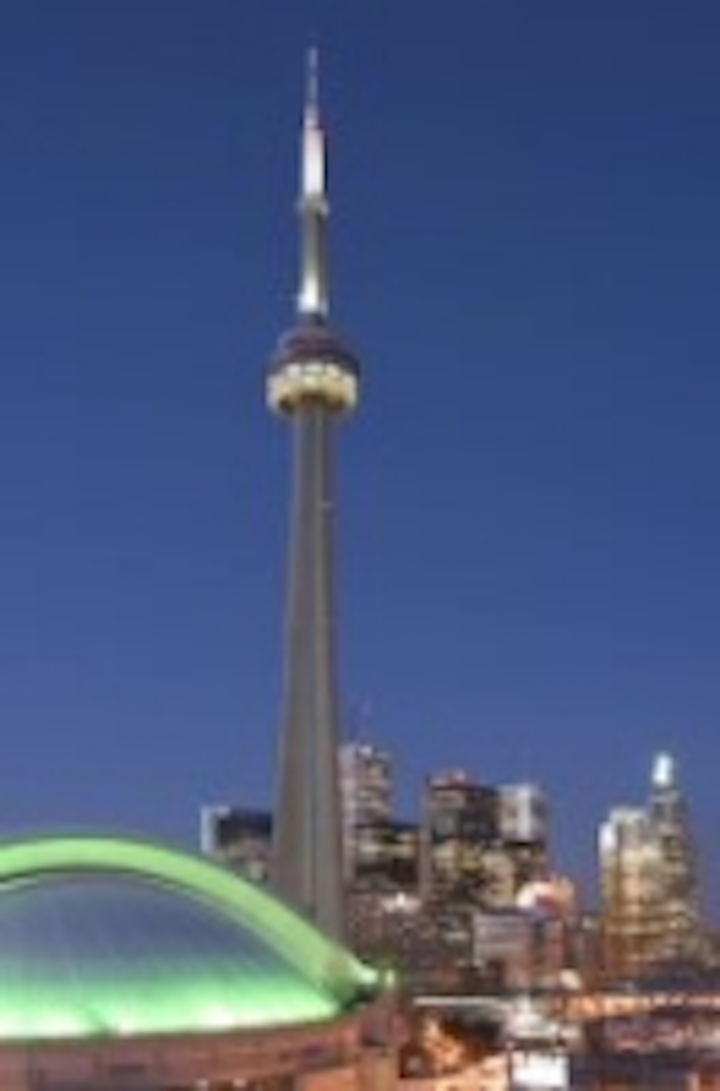 The CN Tower in Toronto, Canada, a national landmark and at 553.33 metres (1,815ft ) the world’s tallest freestanding tower, has been fitted with 1,330 color-changing LED fixtures. The new lighting scheme will be unveiled in a ceremony and light show on June 28 (at which point we hope to get some photos!!).

The LED fixtures each no larger than a shoebox replace conventional fixtures the size of washing machines. The Tower authorities say that the programmable LED lighting system is energy efficient and cost effective to maintain, and presents a more vibrant Tower while using less energy than former conventional lighting systems.

“The CN Tower is an architectural and engineering wonder and we are thrilled to realize a dynamic and visually elegant CN Tower as part of the Toronto night time skyline,” said Jack Robinson, Chief Operating Officer for the CN Tower. “We’ve waited a long time for the right technology that would present a sustainable installation at Canada’s National Tower and this latest technological upgrade provides an energy efficient, cost effective and architecturally stunning result.”

The Tower will be lit each night from dusk until 1 a.m. and feature occasional thematic programming during national holidays and other events. The system also features directional lighting which presents a brighter Tower that does not interfere with nearby residences and hotels.

The CN Tower is continuing its longstanding support of Toronto’s FLAP, or Fatal Light Awareness Program, which encourages buildings to dim unnecessary exterior lighting to mitigate bird mortality during spring and fall migration. Tower authorities say that they look forward to exploring how directional and LED lighting can mitigate bird mortality, as current theories suggest.

"A few short years ago it may have been unthinkable to light a tower of this magnitude with LED sources," said Bill Sims, president and CEO of Color Kinetics. "This installation will mark another milestone for the technology’s adoption as the de facto method of lighting with color today."