Cree Huizhou Solid State Lighting Co., Ltd., the company’s first LED chip manufacturing base in China, has opened just over a year after the project was announced. 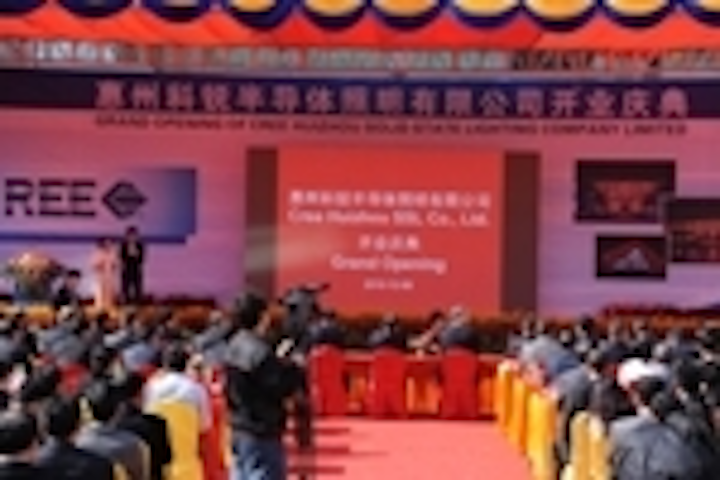 Cree signed an agreement with Huizhou in November 2009, which involved the establishment of Huizhou Solid State Lighting Co., Ltd. With support from the People’s Government of Guangdong Province, the Huizhou Municipal People’s Government and the Administrative Committee of the Huizhou Zhongkai High-tech Industrial Development Zone, the factory was completed and put into production in just 8 months.

Currently, the facility undertakes LED wafer cutting, testing and classification prior to packaging. In his address at the opening ceremony, Swoboda said that the new factory “dramatically expands Cree’s LED chip production capacity to support the increased demands from the global LED market.”

Though Cree is a US-based, Nasdaq-listed company, Swoboda said that “Cree management never runs this company as a US company. We consider Cree to be a global company with local wisdoms.”

Describing China as a very important market for Cree, Swoboda said that currently more than 50% of Cree’s employees are working and living in Huizhou. “We will continue to invest here for both human talent and the most state-of-the-art technologies,” he said, adding: “We have committed that in the coming 3-5 years, we will continue to expand our operation in Huizhou.”

While Huizhou is Cree’s operational headquarters in China, the company has also set up sales and engineering service centers in Shenzhen and Shanghai. Swoboda said that Cree’s development strategy is “Cree Chip, China Heart”, adding: “We will work to keep the close collaboration with governmental bureaus, industrial organizations and enterprises in China, where we push the healthy, scientific and orderly development of the LED industry in China with joint efforts with our business partners, to facilitate the LED installations in cities, and make many more contributions to energy savings and emission reductions in China.”

In the afternoon of December 8, an international LED lighting forum was held at the Kande International Hotel in Huizhou. The forum was sponsored by the Huizhou Municipal People’s Government and the Semiconductor Lighting Committee of the China Association of Lighting Industry and organized by the Administrative Committee of the Huizhou Zhongkai High-tech Industrial Development Zone and Cree. The aim of the forum was to draw upon the opening of the new facility to publicize green LED lighting and promote the wider application of LED technology in urban lighting.