Colored underpass lighting and LED accent lighting from GE has been chosen to illuminate the historic George Rogers Clark Memorial Bridge that crosses the Ohio River. 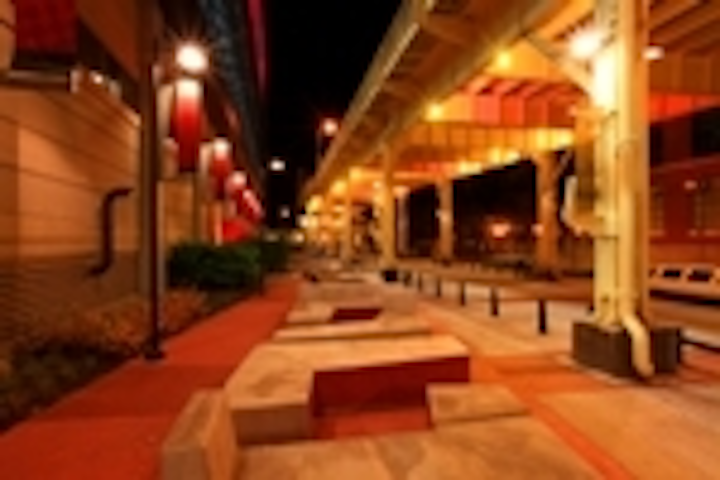 An innovative lighting design that combines fluorescent, metal halide and LED lighting was the basis for a $3 million project to renovate the historically significant George Rogers Clark Memorial Bridge, also known as the Second Street Bridge, in Louisville, Kentucky. The project began in June 2010 and was funded by the American Recovery and Reinvestment Act (ARRA) as well as state and local funds. The Second Street Transportation and Streetscape Project included a widening of Second Street and surrounding sidewalks, creation of a plaza for vendors and performers, development of a seating area, and a cost-effective lighting design.

Along the edge of the bridge, LED luminaires with integrated DALI control were used. The LEDs are programmed to flash and count down the hours from sunset to midnight on week nights or to 2:00 a.m. on Fridays and Saturdays. On the hour, the bridge lighting features a dynamic sequence.

“While the Second Street Bridge project embodied a very unusual application for fluorescent tube lighting, these lamps worked perfectly,” Schwendinger reflected. “The underside of the bridge started as a dark, uninviting space and has been utterly and completely transformed into a meeting ground for events.”

Located near the City’s recently revitalized “Whiskey Row” that once served as the center of Louisville bourbon production, the Second Street Bridge was repainted to a cream color, which, when illuminated by its new crimson- and gold-colored fluorescent lighting, takes on the amber color of the bourbon for which Kentucky is famous. The bridge’s appearance was also designed to be reminiscent of a sunset magnified by the Ohio River.

The public space below the Second Street Bridge was opened in October 2010, on budget.