Despite some quality issues, China now leads the world in the deployment of LED street lights, and the country’s next Five-Year Plan is expected to drive further advancements, writes PHILIP JESSUP. 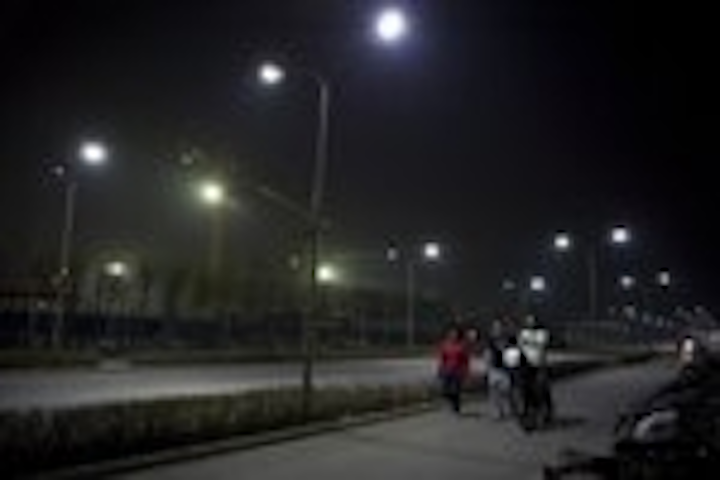 China is the epicenter of the LED revolution, accounting globally for 46% of the consumption of high-brightness LEDs in 2009, followed by North America at 30% and Europe at 17%, according to Strategies Unlimited. With over 2,200 manufacturers making LED devices, packages and luminaires today, China is advancing rapidly to the forefront of Asia’s LED market.

Although much of the country’s LED industry makes contract products for western companies, the central and provincial governments, especially Guangdong Province, are aggressively developing their own internal markets for high-quality, high-brightness, white-lighting applications.

In 2009, the Ministry of Science and Technology launched its “21 City, 10,000 LED Lights” program, the first phase of a much larger national demonstration project to install two million LED lamps in 50 cities.

A key aim of the project is to enable LED companies to deploy their LED products in the cities where they are located, using large installations as platforms for demonstration, for local investment, and to attract utility orders. As a result, the Ministry provided subsidies directly to the LED manufacturers – a 10% subsidy has been the norm – which then partnered with their local municipal governments. Here are some typical projects:

Tianjin: A variety of outdoor LED demonstration projects were undertaken in 2010 on the Tianjin Polytechnic University campus (see photo) and on the city’s streets, as well as many indoor installations, totaling 110,000 lighting fixtures.

Hangzhou, Zhejiang province: An outdoor demonstration was undertaken of LED luminaires along 21 km of the Jinghang or Grand Canal and in the vicinity of West Lake. A total of 65,000 outdoor and indoor LED lamps were installed.

Shanghai: Support for LED street-light demonstrations at the Shanghai World Expo site, including the China Pavilion and a wide variety of streets near the Expo, as well as public spaces and landscape applications.

Shenzhen, Guangdong province: Installation of 10,000 LED luminaires along 130 km of expressway and tunnels, one of the largest highway LED retrofit projects in China.

The “21 City, 10,000 LED Lights” project was reportedly hampered by LED product-quality issues. Failure rates of 70% and annual lumen depreciation as high as 30% in some locales have been reported anecdotally. Hence, the project slowed in 2011 to allow time for evaluation by the China Solid-State Lighting Alliance (CSA). Key problems identified by the CSA’s study were:

• Municipal governments found it difficult to implement the programs. Financial subsidies from central government were low, and restricted to the LED companies.

• Technical assessment of the products offered by local companies and site applications was often insufficient, leading to a mismatch between the product and its application.

• A dearth of energy-service companies in China with strong financial expertise in energy-efficiency technologies made it difficult for municipal governments to raise adequate funding.

• Regional trade-protection barriers within China prevented quality products from being used in many cities.

Despite the early problems encountered, demonstration projects undertaken by cities in Guangdong province proved very successful. This was due to the implementation of rigorous technical requirements and standards associated with the energy management contract (EMC) business model pioneered in China by these cities.

Under the EMC model, banks provide project financing to the cities to cover third-party testing data, feasibility analysis, street reconstruction, and light sources. The loans are repaid from energy savings over a six-year period, which involves periodic field monitoring. Typically, 10% of the project cost is subsidized by Guangdong province, 15% by the municipal government, and the remaining 75% financed through the EMC with an energy-service company.

Guangdong’s leadership in LEDs is driven by the importance of the technology to the province’s economy. Companies located in the province supplied 70% of China’s LED packages in 2010, with foreign investment approaching $1.5 billion in local LED firms, much of it centered in Shenzhen’s Special Economic Zone.

In order to maintain this momentum, Guangdong relies on aggregating local procurement to expand the provincial market for locally-produced LED luminaire products. As of the end of 2011, 200,000 streetlight luminaires had been installed on 2,000 km of provincial streets and roads, including 100,000 units in the capital, Guangzhou (see also page 8). Installation of another three million LED street lights is planned soon.

In part due to the “21 City, 10,000 LED Lights” project and Guangdong’s leadership, China now leads the world in the deployment of LED street lights. In 2010, approximately 350,000 LED street lights were installed in Chinese cities, 74% of the global total, according to Strategies Unlimited. A temporary contraction is expected in 2011. 12th Five-Year Plan (2012-2016)

China will continue its ambitious LED lighting program in the next Five-Year Plan, which ambitiously aims for LEDs to achieve 30% market share of China’s general lighting market by 2015. Guangdong province has adopted probably the most ambitious provincial goal: the installation of 30 million indoor LED lights by 2015. Key elements of the national plan include:

• Development of Chinese technology in the field of metal-organic vapor-phase epitaxy (MOCVD).

While quality issues have dogged China’s HB-LED efforts to date, these are not likely to dampen the country’s long-term ambition to become one of the top three leaders in manufacturing LED products. It is expected that Chinese governments will effectively address LED product quality problems all along the supply chain through home-grown R&D and procurement initiatives, and joint ventures with western LED companies such as Cree, while deploying a mix of well-coordinated policies, subsidies, and market aggregation initiatives that capitalize on the large size of China’s market to gain comparative advantage globally.