The German community of Pielenhofen has begun a transition to LED-based street lights using Herkules retrofit kits and Osram LEDs while Nova Scotia plans to extend its SSL retrofit program to every street light in the province. 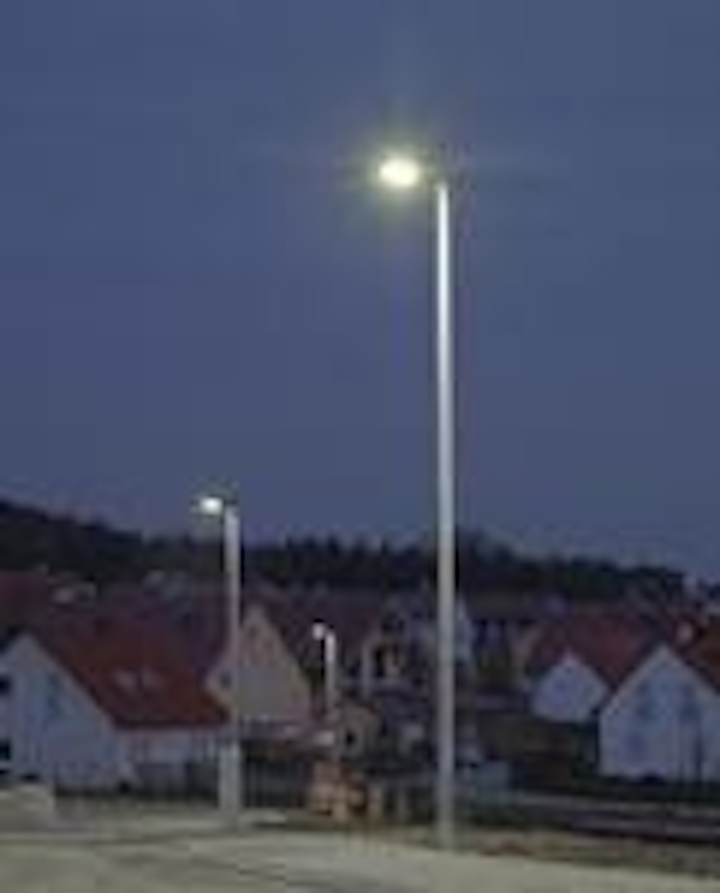 Communities across North America have been making the biggest headlines for LED street-light retrofits, but even small communities around the globe are making the switch as evidenced by an outdoor lighting project in Pielenhofen, Germany. Herkules Elektronik GmbH retrofit kits that use Osram’s Golden Dragon Oval Plus LEDs are lighting a new home community and a larger conversion is planned. Nova Scotia, meanwhile, has performed significant solid-state-lighting (SSL) retrofits and plans to convert every light in the country in five years.

Pielenhofen first tested LED street lights in February 2010 with two luminaires installed in the heart of the community. The community has now kicked off a transition to LEDs with the installation of nine SSL fixtures in a neighborhood called Rohrdorf. Moreover the community is using adaptive controls to maximize energy consumption.

Local mayor Reinhold Fersti noted the superior ability of the luminaires to control beam pattern as one reason for the conversion. Fersti said, “What convinced us was the modern technology, as it not only produces more pleasant, warm light: the light diodes only project their light into the desired direction.”

The Herkules luminaire retrofit was developed as a replacement for mercury-vapor lamps and the 50W koffer-type housing that is widely used in the city of Kassel, Germany. Indeed Herkules refers to the design as a Kassel-type retrofit, and the 26W kit includes the light engine and driver electronics that replace the lamps in existing housings.

The design relies on the Golden Dragon Oval Plus LEDs to form the beam pattern. The LEDs feature an integrated oval lens that can spread the beam in a somewhat rectangular pattern along a roadway, with minimal light trespass. For more information on the LEDs and beam patterns see, “SSL luminaires must deliver reliable beam patterns in outdoor applications."

About the beam qualities of the components and the Kassel retrofit, Osram said, “This effect is reinforced by the integrated lens of the Golden Dragon Plus: this makes it possible to generate a brighter and more even illumination of a defined area, despite low intake of power – it also achieves an optimum illumination of the street, conforming with the relevant norms, avoiding scattered light and staying below the limit regarding dazzle.”

Based on the LED retrofit, Pielenhofen would realize what’s essentially 50% energy savings based on the lower-power kits, but the savings will actually be greater because the community is using dimmable SSL technology. The dimming functionality was proven out in the Kassel retrofit last year where late at night the power consumption is further reduced to 14W per fixture.

Pielenhofen plans to upgrade to LED street lighting across the entire community in stages. Indeed European Union (EU) regulations will give such communities little choice going forward. Beginning in April 2012, the sodium vapor lights presently used by Pielenhofen will be taken off the market. The retrofit kits will provide a way to replace failed lamps.

The EU is also mandating the removal of mercury vapor lights beginning in April 2015. Communities across the continent will be faced with replacement or retrofit scenarios.

Back on the west side of the Atlantic, the province of Nova Scotia, Canada had already announced plans to buy 2500 SSL fixtures from LED Roadway Lighting. Now Province Premier Darrell Dexter has introduced legislation that will mandate LED street lighting exclusively across the province.

"Nova Scotia will become the only province or state in North America to ensure only LED streetlights are used on its roadways," said Premier Dexter. "Nova Scotia is already recognized for our efforts to reduce greenhouse-gas emissions. The switch to LED street lights is just another example of what the province is doing to help the country meet its greenhouse-gas emission reduction targets."

The Premier’s office is estimating that it will cost $100 million to completely convert the 120,000 street lights in Nova Scotia. But the province hopes to ultimately save $18 million per year in energy costs. The office also claims the move will reduce greenhouse gas emissions by more than 30,000 tons per year. Municipalities and communities will be given five years to make the conversion.