Nevada will install 4534 LED street lights while Fountain, CO, and East Lyme, CT, have chosen SSL luminaires that would match the historic appearance of the communities and minimize light pollution. 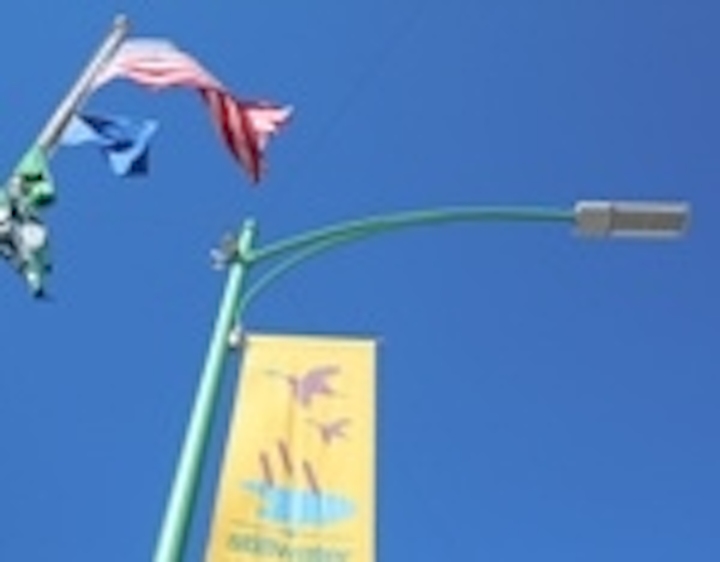 The Nevada State Office of Energy (NSOE) has launched a program to retrofit 4534 street lights with LEDs in multiple areas across the state. Fountain, CO has lit its historic city hall with LEDs, and Longmont is testing solid-state lighting products including pedestal fixtures in a neighborhood. East Lyme, CT found an LED post-top fixture from Hubbell Lighting that matches the town's colonial-period look.

We recently covered a major ongoing LED street light project in Las Vegas, NV and now the NSOE agency is bringing SSL to other cities and counties enabled in part by funding from the American Reinvestment and Recovery Act (ARRA) and a US Department of Energy (DOE) Energy Efficiency and Community Block Grant (EECBG). The NSOE plans to install 4534 LED street lights along with 1226 LED-based traffic signals aiming to save $300,000 annually in energy and maintenance costs.

NSOE Director Stacey Crowley acknowledged the importance of the savings and also praised the LED light quality saying, "The new lights have a more modern look than the old lights and produce a brighter image that increases safety on city streets and intersections by improving visibility."

Fallon, NV is one beneficiary of the program as the town was able to install LEDs in its entire inventory of 640 street lights. The town is projecting 15-20 year lifetime for the lights and is hoping to save $60,000 annually.

"The funding allowed a large initial capital investment in LED street lights, which otherwise wouldn’t have been possible in the current economy," said Fallon City Engineer Jim Souba. "This grant has been a blessing for Fallon allowing the city to complete a number of important energy-efficient upgrade projects that will reduce the cost of operations."

Souba also addressed the light quality. “The city has received a number of compliments on the light quality produced by the new lights,” said Souba. “One Fallon resident, who went for an evening walk after the LED lights were installed, said she was delighted and amazed with the new bright and cheery appearance.”

The NSOE noted that while the LED lights produce the same light output as the high-pressure sodium lights being replaced, that the LED lights appear brighter. The agency attributes the advantage to better light control and a more pleasing color temperature.

Other areas in Nevada that are getting LEDs include Ely, Lyon County, Douglas County, Washoe County, and Carson City. Those projects are in addition to the previously mentioned installations around Las Vegas in Clark County.

Acuity Brands announced that its Holophane Utility Full Cutoff LED luminaires have been installed around the historic city hall in Fountain, CO located near Colorado Springs. The luminaires are specifically designed to reduce light pollution while maintaining what the company calls a retro-appearance. Fountain was looking to maintain the aesthetics of the prior HPS lights and to minimize light pollution.

"Everyone agrees the difference in lighting is dramatic, significantly improving the appearance of Fountain's City Hall at night without shining light into the sky," said Fountain City Manager Scott Trainor. "We are pleased with the color rendering of the LED luminaires and their ability to help us reach our sustainability goals while providing an aesthetically pleasing and dark-sky compliant light." Trainor also noted that the LED lights will reduce energy consumption by 30% relative to the HPS lights they replaced.

The city of Longmont, CO is also testing LED street lights according to the local Times Call newspaper. The city has had some SSL fixtures in place for two and a half years and recently installed eight pedestal LED luminaires on the Redfern Place cul-de-sac.

Longmont is moving cautiously forward due to the high upfront cost of SSL fixtures. But the tests so far have produced positive results that suggest that energy and maintenance savings from LEDs will cover the upfront premium. The city could replace almost 4000 cobrahead lights and 7500 neighborhood pedestal lights.

Aesthetics is becoming increasingly important as more communities with historic districts look to save energy with SSL. East Lyme, CT, near the seaside town of Mystic, had just such concerns in considering LED lighting. And ultimately the city chose Providence luminaires from Architectural Area Lighting (a division of Hubbell Lighting).

Thus far, East Lyme has installed 37 of the luminaires with more to come. But the lights have already reduced energy usage by 20%. Dejean said, "What the community has done could become a template for other communities throughout New England and the country."