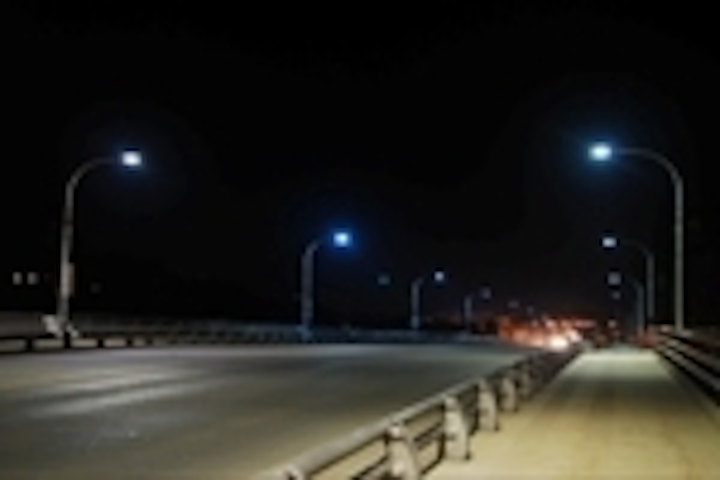 A three-month trial of LED-based luminaires from four vendors is coming to an end in De Pere, Wisconsin and the city hopes to move forward with more SSL projects. BetaLED has announced new solid-state lighting (SSL) installations in the Port Columbus airport in Ohio, and in the city of Pittsburg, California. Easthampton, Massachusetts has started an SSL project that will see LEDs replace 469 high-pressure sodium (HPS) lights.

De Pere has been testing SSL luminaires from Philips Gardco, Leotek, Dialight, and BetaLED on the Claude Allouez Bridge. The LED fixtures are all in the range of 150W according to Assistant City Engineer Karen Heyrman and they were used to replace 250W metal-halide (MH) fixtures. The city replaced the lights on the south side of the bridge.

Heyrman said that she took light meter readings using a grid pattern both directly under the lights and between adjacent poles on both sides of the road. The city is now analyzing the data both for the comparable brightness of the LED and MH lights, and for the uniformity of the light.

The city believes that LED lights will save money despite high upfront costs. Moreover, Heyrman expects prices to drop with more manufacturers entering the market. De Pere has not selected a vendor yet, but Heyrman expects to begin purchasing SSL products in 2012.

The city of Pittsburg near Sacramento in California is installing 1307 BetaLED street lights replacing HPS lights with the goal of saving $76,000 per year in energy and maintenance costs. "The conversion to LED will not only help achieve our initial goal of reducing operating expenses, it will help us get closer to meeting environmental goals and initiatives by saving energy and reducing greenhouse gas emissions," said Laura Wright, City of Pittsburg’s Environmental Services.

From the environmental perspective, the city projects that it will annually eliminate 281,413 pounds of greenhouse gas emissions with the conversion. It expects to see a 59% reduction in energy usage with the new lights.

The city also believes the light quality will be better and more uniform. The city surveyed both residents and police officers that reported better nighttime visibility under the LED lights.

The project was funded in part by a US Department of Energy (DOE) Energy Efficiency Conservation Block Grant (EECBG) combined with rebates from the Pacific Gas & Electric utility.

Port Columbus, the second busiest airport in the state of Ohio, has installed 344 BetaLED SSL luminaires in the curbside passenger drop-off, arrival, and baggage-claim areas. The SSL conversion has reduced energy consumption by 60% relative to the previous MH lights.

The airport is operated by the Columbus Regional Airport Authority (CRAA), and the lighting retrofit was part of the CRAA's "15 by 15" program to reduce overall energy consumption by 15% by the year 2015. CRAA was also looking for a lighting system that could operate 24 hours a day with "virtually no maintenance."

"We sought to install one-for-one replacements that would improve lighting performance and outlast the old HID system that was costly to maintain," said Paul Kennedy, Manager of Energy and Environment at CRAA. "All things considered, after realizing the short payback timeframe and energy and maintenance savings the decision was easy to make."

According to the Daily Hampshire Gazette, the city of Easthampton Massachusetts will replace 469 HPS street lights with LED-based fixtures. The city expects to save $36,700 annually in energy and maintenance costs.

Easthampton is installing LED fixtures from LED Roadway Lighting. It is using 88W fixtures on highways to replace lights that consumed more than three times as much energy. And it is using 44W SSL product to replace 70W lamps on city streets.