LED-based lighting is saving 71 trillion BTUs across ten identified applications, but those savings could increase more than 50 fold with a complete transition to SSL. 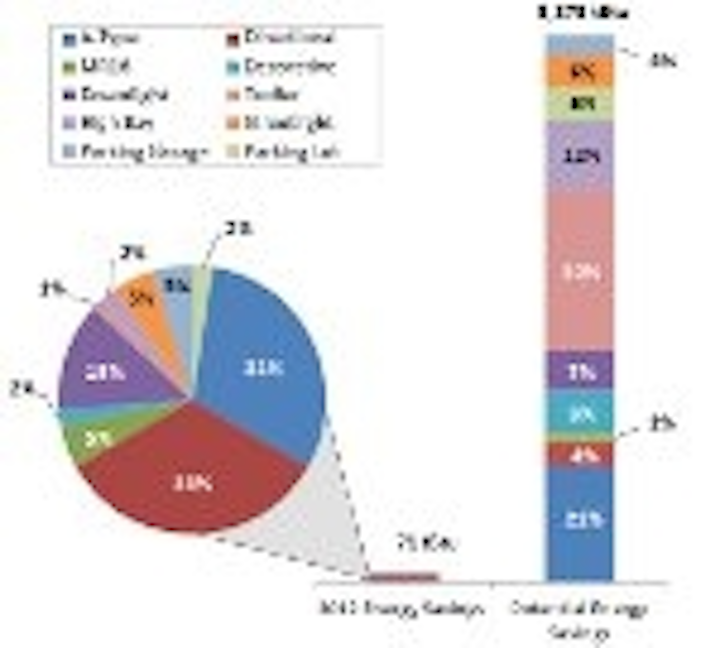 The US Department of Energy (DOE) has published a new report entitled "Adoption of LEDs in common lighting applications" that documents the energy being saved already by LED usage in ten specific applications. Moreover the report projects the potential savings were there to be a complete overnight transition to solid-state lighting (SSL) in those applications.

The report examines US LED usage in A-lamp and MR16 retrofit lamps, and in eight types of integral luminaires segmented by application including downlight, high bay, parking garage, directional, decorative, troffer, street light, and parking lot. Today, LED usage across those applications is saving 71 trillion BTUs (British Thermal Units) annually and the DOE says that is equivalent to $675 million in energy costs. The report projects that savings could reach 3,873 trillion BTUs if the US were to transition fully to LEDs in the ten applications.

The biggest potential increase would come in troffers. Today LEDs only deliver 1% savings in troffers, but the potential is 30% of the total. That's one of the reasons so many companies are pursuing LED retrofit tubes for T8 and other fluorescent sockets.

Alas issues remain with retrofit tubes as the DOE recently documented in a Caliper report. That same report, however, reported excellent result for purpose-built LED troffers so the segment will likely transition to LED-based products over time.

The research reveals that retrofit lamps at 31% and directional lighting at 34% make up the largest areas of savings today. Because of the already significant deployment of LED products in those applications and an expected transition to more integral luminaires, the percentage roll that retrofit lamps will play going forward will decrease even as additional SSL usage in those areas adds to the absolute savings.

The relative size of the different application areas does hide some significant savings potential. For example, LEDs in street lights are contributing 5% of the savings today, and the potential savings in a theoretical complete transition to LEDs is only 6%. But the absolute numbers tell a vastly different story.

The DOE reported that at the end of 2012, 1 million street lights in the US – 2% of the total – were converted to LEDs, saving 3.5 trillion BTUs. A complete switchover would boost savings to 238 trillion BTUs. But relatively speaking, that is a small number compared to the potential for troffer savings projected at 1,146 trillion BTUs.
Latest in Outdoor Lighting