Jason Chen, Maciej Slotwinski, and Gerry DiBattista guide first-time users of venting materials through the material selection and application steps that can enable robust SSL luminaire designs in the face of moisture. 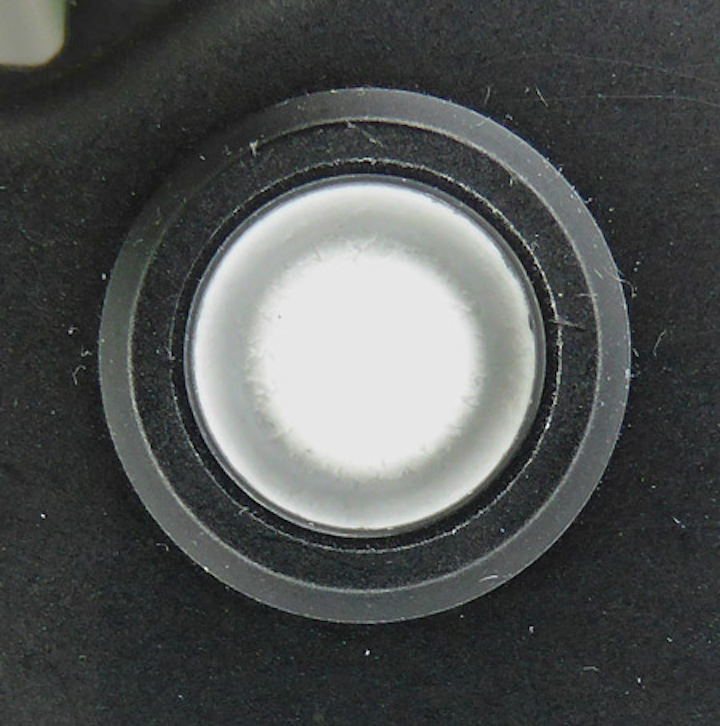 JASON CHEN, MACIEJ SLOTWINSKI, and GERRY DIBATTISTA guide first-time users of venting materials through the material selection and application steps that can enable robust SSL luminaire designs in the face of moisture.

LEDs are an inherently rugged and reliable light source, making solid-state lighting (SSL) an attractive option in applications where moisture and other hazards are present, with ruggedness adding to the energy-efficiency advantage. Ideally, LED products that could be exposed to damp, wet, dusty, or dirty environments should be sealed to prevent damage to the internal electronics. Sealing a product, however, can lead to a housing or seal failure from internal pressure build-up from heat generated by the LED and its drivers. Adding a hydrophobic microporous vent is an easy and cost-effective way to protect the product by keeping dust and liquids out of the enclosure and relieving the pressure, or negative pressure, in the enclosure.

SSL applications that might require vents range from outdoors where luminaires must withstand natural elements to indoors where the work environment poses the risk. Fig. 1, for example, shows an LED street light that is subject to rain and other weather that could result in moisture ingress. Indoors, SSL in applications such as food service provides an example where venting might be required because pressure washing is used in the facility. Moreover, any application that must withstand temperature cycling is a candidate for a vented luminaire. 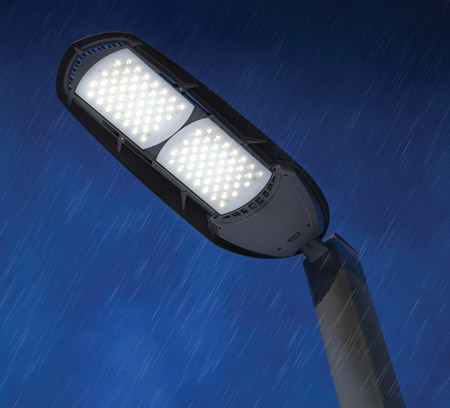 FIG. 1. Outdoor LED luminaires should incorporate vents to prevent fogging of lenses and to keep moisture from damaging the electronics within.

Vents can keep moisture out and allow condensation to escape while equalizing pressure. Ironically, a vented luminaire can prove more reliable in a harsh environment than a design in which the developer sought to completely seal the enclosure.

Let's start by discussing some material options for vents in LED luminaire design. Polytetrafluoroethylene (PTFE) is commonly used for such protection vents because of its natural hydrophobicity, resistance to chemicals, and thermal and ultraviolet (UV) stability. PTFE protection vents can be constructed from sintered porous membranes or from what are called stretched PTFE or expanded PTFE (ePTFE) (Fig. 2). The sintered alternative is generally superior in that sintered materials resist mechanical fatigue, are typically stronger, and can meet UL flammability requirements.

Polyethylene (PE) plugs or discs are a lower-cost option for protection vents. PE discs, however, have lower operating temperature limits, and generally resist water and dust at lower levels than PTFE. Both PTFE and PE vents can be made into sheets, customizable sizes, or three-dimensional shapes.

Now let's again discuss a potential application and go deeper into the reason a vent is required for reliable luminaire operation. Non-vented designs can suffer catastrophic or even temporary failures. For example, an outdoor LED luminaire is an application where temperature changes inside the lighting enclosure can cause failures due to intrusion or condensation of moisture. Lens fogging caused by water that has entered the luminaire can affect the light output, and at least temporary functional failure. Positive and negative pressures can compromise seals or joints around the enclosure, as even the best gasket-based designs cannot account for in-use fluctuations in temperature, moisture, and mechanical impact. 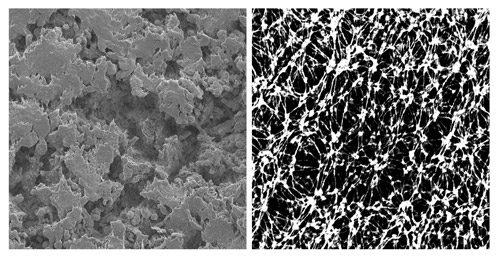 FIG. 2. Sintered porous membrane PTFE is shown on the left versus stretched or expanded PTFE on the right. Stretched PTFE can have lower mechanical strength and fewer shape and pore size options than sintered membranes.

Temperature changes in the luminaire can be the natural result of cycles in operation and can also be due to the outside environment. Depending on the conditions, these temperature changes may be as high as 85°C. Even assuming a temperature increase as low as 15°C, a sealed enclosure will see about a 56 mbar (0.8 psi) pressure differential with the external atmosphere. Since this pressure exceeds 35-40 mbar, the seal and gasket materials protecting the LED electronics could leak and allow intrusion of moisture or dust.

Luminaire developers working on a new product should consider venting as one of their first design steps. Product teams should select a vent material and implementation to meet the airflow, fluid ingress resistance, and mechanical requirements of the application. A sintered porous vent, such as an adhesive disc, a plug, or a screw-in vent, can allow for the flow of air while continuously protecting the lamp from rain and other liquids. While a breathable vent will release air pressure as well as minimize water condensation inside the luminaire, the ability of the vent to keep liquid water out of the enclosure is also important.

The vent specification is guided by the application and the Ingress Protection (IP) required per IEC standard 60529. The IP rating refers to the robustness of a product to ingress of moisture and dust. Any enclosure or luminaire should have an IP rating that classifies the design relative to application needs. Fig. 3. summarizes the IP code.

As IP numbers increase up to IP66, the environmental challenge becomes more difficult. In general, if a product meets a specific IP rating such as IP65, then it will resist contaminant and liquid intrusion at the lower rating levels. For the liquid-related IP ratings, IPx7 and IPx8 represent underwater ratings that may not be more difficult to pass than IP ratings which must resist direct high-pressure water spray, such as IPx5 or IPx6.

To help illustrate the process of matching applications and materials, we created the nearby table that summarizes typical IP rating options for a luminaire relative to different types of materials that might be used for a porous vent. Choosing porous membrane materials with the proper water resistance will ensure liquids and contaminants do not enter and compromise internal electronics. If the light source will be subject to water spray for cleaning the lamp, then an IP66-rated vent would be recommended, highlighted by the red ellipse near the bottom of the table. Otherwise, an IP64 vent may work sufficiently and we circled one such IP64 option in the table.

Once you choose a venting material, you must consider how to apply that material in the luminaire. There are numerous options based on the material selected and on the mechanical design of the luminaire. 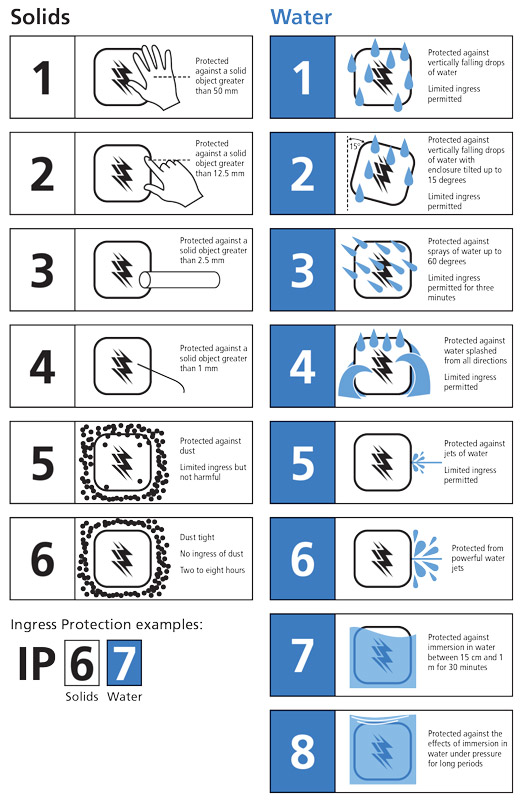 Heat is often an option in assembly. PTFE has a high melting point of 620.3°F (326.8°C). Therefore, a bond with a PTFE vent can be created by heating and melting another plastic into the porous PTFE structure. The material to which PTFE will be bonded should have good flow properties and a melting temperature lower than 260°C. Most thermoplastic materials are suitable for welding with PTFE including polypropylene, polyethylene, polycarbonate, nylon, polybutylene terephthalate (PBT) and acrylonitrile butadiene styrene (ABS). Because attaching PTFE discs with thermal methods does not require an adhesive, the process is simple, clean, and permanent, and PTFE discs on a roll can be used on automated manufacturing lines. 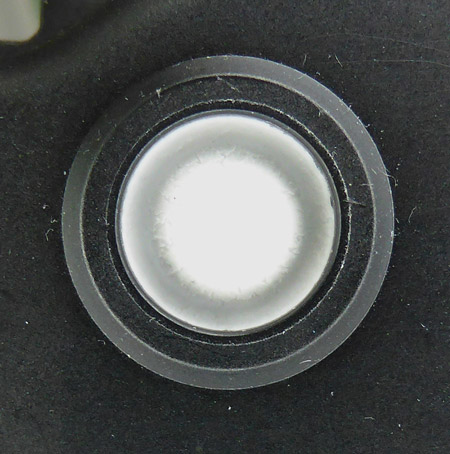 Use microporous vents for reliable LED luminaire design
FIG. 4. A PTFE vent can be incorporated on an enclosure by overmolding.

Prototypes can be made using a heat staking machine, which can easily be found online. Another common technique for bonding PTFE discs is ultrasonic sealing, which bonds the materials using high-frequency energy. Impulse welding is another option and a version of heat staking in which metal bars along the area to be bonded are rapidly heated then cooled. The result is a strong bond that minimizes deformation of both the PTFE and enclosure, and is rapid relative to traditional heat staking processes.

Overmolding is another method to secure vents onto an LED enclosure (Fig. 4). In this method, the PTFE disc is initially placed inside the mold and plastic is molded around the disc, forming a water-tight seal around the edge of the vent.

There are still other methods to attach PTFE vents to LED housings. Discs are available with pressure-sensitive adhesive on the back of the vent (Fig. 5). The center of the PTFE material on such a disc is not covered by adhesive in order to allow airflow through the vent. This product can be surprisingly robust and can last many years. Millions of adhesive-backed discs have been used in challenging environments such as outdoor LED lighting, LED automotive headlamps, and other automotive electronics. Because sintered PTFE is stiffer than stretched PTFE, some adhesive-backed sintered PTFE discs are rated at IP66 and can withstand direct water spray without a protective cover. 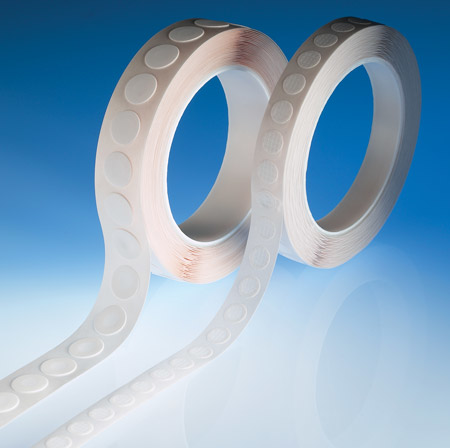 FIG. 5. Adhesive-backed PTFE discs are supplied on a roll.

Non-adhesive-backed PTFE vents can also be incorporated into an LED luminaire design. Assembly options for such vents include mechanical interference fits such as press-fit or snap-fit enclosures.

A key benefit of LEDs in lighting products is long product life. But reliable operation goes far beyond the light sources and includes all elements of a luminaire, such as materials. Protection vents are a simple and effective way of protecting and providing airflow through LED luminaires. Venting your LED electronics is an important function to prevent condensation inside the enclosure and premature failures.

In practice, attaching a PTFE vent onto an LED lighting enclosure is relatively straightforward. Prototypes can be made with readily available heat staking or ultrasonic welding equipment. If the product moves into high volume, enclosure parts can be molded around the vent. Adhesive discs are yet another easy and robust option.

Design considerations for the engineer or designer to determine include: 1) level of ingress (liquid) protection needed (e.g., IP66, IP45, and so forth); 2) vent size or number of ports needed to achieve the desired venting; 3) mechanical rigidity and strength; and 4) vent shape or form, e.g., pressure-sensitive adhesive-backed PTFE disc or rectangle, press-fit (interference fit) plug, or screw-in vent.