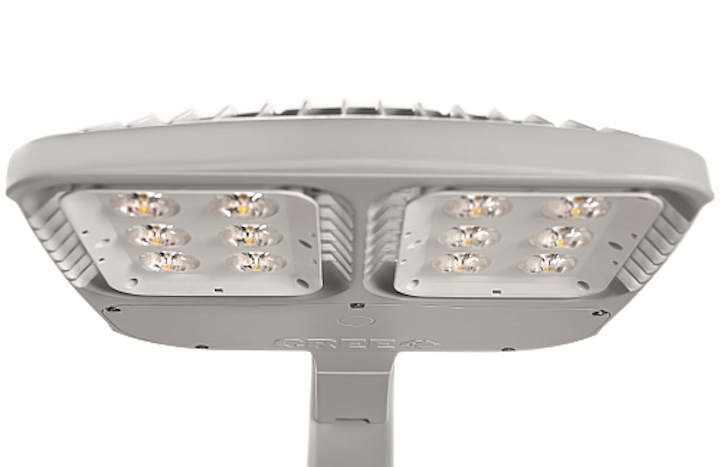 Back in May, US President Obama made a sweeping announcement of energy-oriented initiatives meant to decrease energy usage, create US jobs, and reduce greenhouse gas emissions. The programs included new commitments to solar and $2B (billion) in new investments in energy efficiency projects. As Jim Brodrick, lighting program manager at the DOE, pointed out in one of his recurring Postings emails, the new High-Performance Outdoor Lighting Accelerator portion of Obama's program will lead to the retrofit of 500,000 legacy street lights with LED fixtures.

Brodrick specifically mentioned Detroit, MI, a city with ongoing economic issues and an inventory of street lights that are more than 20 years old on average. The new program will enable an upgrade in Detroit that will include network and control technology that is expected to save the city $1.5 million per year.

Detroit is one of five US cities that will be a part of the accelerator program. The others include Huntington Beach, CA; Little Rock, AR; West Palm Beach, FL; and the greater Kansas City, MO metro area. Under the DOE's counsel, the cities will utilize the specifications developed by the agency's Municipal Solid-State Street Lighting Consortium (MSSLC) for both luminaires and controls to guide the purchase process.

Moving to the outdoor lighting product space, there are a couple of items worth noting. Just before LightFair, we covered the new Cree OSQ luminaire that the company said would greatly decrease the price of SSL area lighting retrofits. We saw that product firsthand at LFI and learned more about the new optic technology integrated in the luminaire. 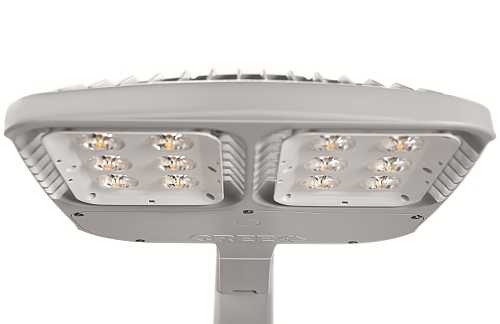 The version of NanoOptic technology in the OSQ is based on a lens that's molded into a metal carrier that can accommodate six such lenses and of course the LEDs are positioned underneath the lenses. The optic does have unique reflective and refractive properties. But the optical performance is enhanced by custom LEDs from the Cree component side that have primary optics designed to deliver an asymmetrical beam pattern. The result is a match with the most popular beam patterns used in area lighting.

The Cree Edge series still offers a broader selection of beam patterns due to the flexibility of the smaller LED sources and individual total internal reflection (TIR) optics used in the Edge product. But the OSQ will be a more cost-effective choice if the application at hand can be served by the available beam patterns. Evidently Cree will not offer the LEDs used in the OSQ family as part of its commercial component product line because the LEDs and optics are designed specifically to work together.

In the post-top luminaire area, meanwhile, MaxLite has added to its retrofit LED light engine product line designed for installation into existing acorn, globe, and bollard fixtures. The new 12W and 20W models are offered in 3000K and 5000K CCT models. 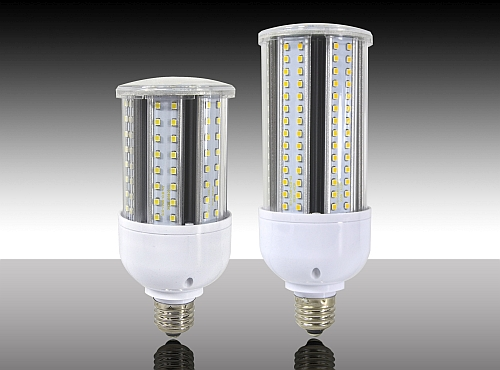 In the SSL project space, we have news of new LED fixture installations in Cambridge, MA and Honolulu, HA. The Cambridge Chronicle reported that the city public works department had begun the upgrade of 4800 cobrahead fixtures with new LED fixtures. The project is scheduled for completion in August.

The project is projected to cost $6M (million) but will cut energy consumption by 50%. Cambridge will also install a network and controls to both monitor performance and automate maintenance, and to enable dimming for additional energy savings.

On the island of Oahu, the Honolulu mayor has announced plans to replace the more than 50,000 light inventory with LED street lights, according to Hawaii News Now. Honolulu has already installed LED lights on some freeways, but in the next 18 months will tackle the broader problem of upgrading all types of roadways. The motivation is both efficiency and a safer environment for the many pedestrians on the island.