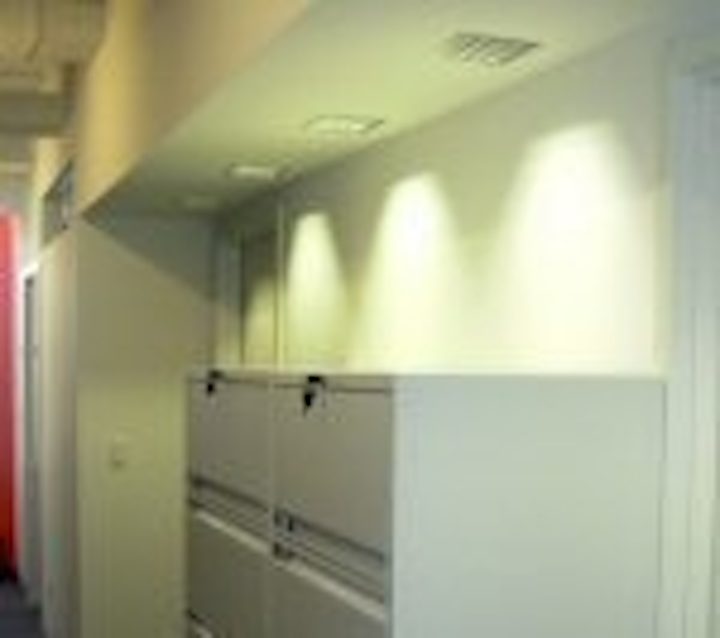 In one of the first examples of the use of LED lighting technology for office lighting, Karlen Williams Graybill Advertising Inc, a full-service advertising agency, has installed Gallium Lighting LED downlights in its New York City office.

"LED lighting demonstrates our innovative culture and commitment to the environment, while providing the practical benefits of energy savings and ultra-low maintenance," said Jeff Graybill, a partner with the agency.

LEDs have a rated life of 40,000 to 50,000 hours, which corresponds to 20-25 years when operated during normal business hours. This is 20 to 25 times the life of standard incandescent bulbs, and 4 to 5 times the life of compact fluorescent lamps. "Our ten-year lease will end long before we would need to replace the LEDs," added Graybill.

Geoff Ling of Gallium Lighting told LEDs Magazine that a total of nine fittings were installed. "The office has an industrial look with exposed ceilings, so there weren't many places to put the recessed fittings," he said.

Each fitting consumes 25.5W. The CRI is 76-79 and the colour temperature is 4200K. Ling calculated that the light levels were about 840 lux (ignoring reflected light from the walls) in the middle of the counter shown in the kitchen photo.

"Many people are drawn to the obvious practical and aesthetic benefits LED lighting, but we have also been pleasantly surprised by the level of interest from people who specify LED lighting because it is the most environmentally-friendly lighting technology available," said Keith Bahde, president of Gallium Lighting.

"Unlike fluorescent lighting, LEDs contain no mercury, so there are no hazardous waste concerns. When people see the quality and quantity of light that the latest LEDs can produce, they realize that they don't have to compromise performance to go green."