LED headlights are available as an optional extra on the new Audi A8, and are used elsewhere throughout the vehicle. 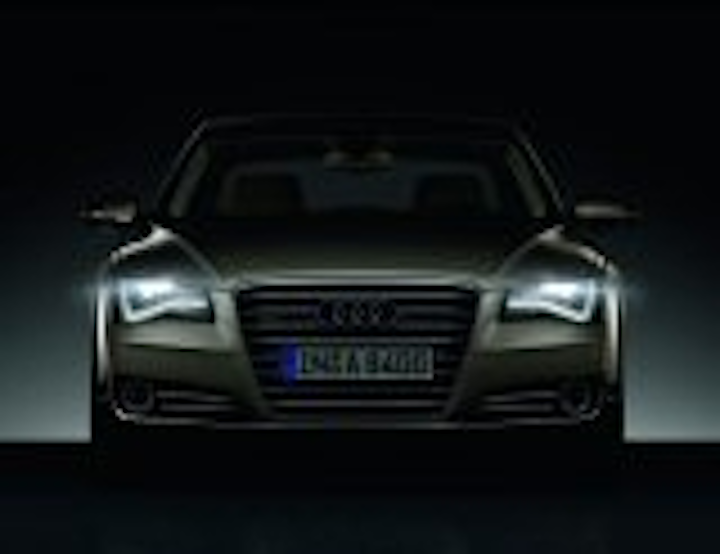 Audi has made LED headlights available as an optional extra on another vehicle, the new A8. LED headlights are also available on the Audi R8 sportscar. Audi says that the full LED headlights give the A8 an “unmistakable appearance even in daylight, and even more so after the fall of darkness. With a color temperature of 5,500 Kelvin, their light resembles daylight and thus is easier on the eyes and reduces fatigue.”

The LEDs are “zero-maintenance” and designed for the life of the vehicle. They also have low power consumption. The low beams, for example, consume only 40 watts per unit, a bit less than the already highly efficient xenon plus headlights.

The low beams comprise 10 individual lens modules extending through the headlight in a distinctive arc known as the “wing” owing to its shape. Just below this is another arc of 22 white and 22 yellow LEDs for the daytime running lights (DRLs) and the turn signals. These appear to the viewer as homogenous, continuous strips of light.

Located above the “wing” are the high beams, whose light is generated by two powerful four-chip LEDs and a free surface reflector system. An assistance function switches between the low beams and the high beams. Additional high-output LEDs generate the highway light and the cornering light. A separate fan and heat sink regulate the temperature of each headlight unit and prevent condensation.

With the exception of the reversing light, the tail lights are realized entirely with LED technology, with each unit containing 72 LEDs. The designers used chip-on-board LEDs, which can be packed tightly together with high precision, in many areas due to the limited amount of space available.

The tail lights, which consume only 9 watts per unit, form a trapezoidal contour that appears as an even, homogenous strip. Its upper segment is a light guide—a plastic tube—and the lower section is a textured, reflective freeform surface. It is thicker than the upper segment to optically lower the center of gravity of the A8’s tail end. The turn signal is located on the upper segment of the tail light and forms a wide, horizontal stripe. The five-segment brake light is located inside the trapezoid. When the new A8 decelerates strongly, the brake light flashes quickly to warn the traffic behind it. The hazard warning lights are activated when the sedan comes to a stop. Some of the LEDs in the brake light can be controlled in such as way as to serve as the rear fog light.

The A8 also has an optional ambient lighting package. LEDs will illuminate the center console, tunnel, door pockets and door sill trim. Drivers can choose from three interior LED colors (Polar, Ruby, and Ivory), and can also change the brightness via the Audi Multimedia Interface (MMI).

LEDs are now a common sight on the rears of many cars. Volkswagen has introduced LED rear lights on the Golf R, Golf GTI and GTD as an option for 350 Euros. Each rear light features two curves containing eleven LEDs each, with further LEDs providing distinctive center dots.

As well as providing a very distinctive look, VW says that the response time when braking is 0.2 seconds faster than for conventional incandescent lights. At a speed of 100 km/h, this is equivalent to 5.6 meters braking distance.