Lightfair will see a number of companies introduce SSL retrofit lamps that are equivalent of 100W incandescent bulbs and GE Lighting and Philips Lighting announced such products before the exhibits opened. 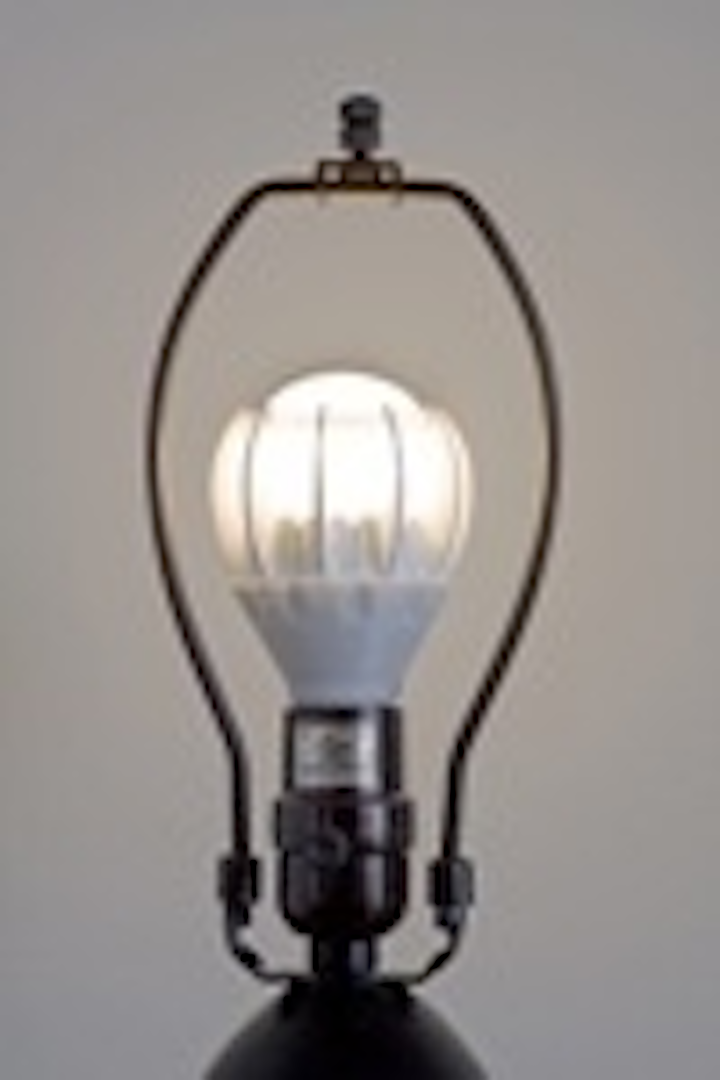 LED retrofit lamps now cover the full spectrum of incandescent lamps with GE Lighting and Philips Lighting each announcing a 100W-equivalent product headed into Lightfair in Las Vegas, NV where the exhibits open on Wednesday. Switch Lighting recently announced such a lamp and others are likely to announce 100W solid-state lighting (SSL) equivalents this week. Philips also rolled out new LED-based reflector lamps with a new thermal technology called Airflux leading up to the convention.

GE Lighting's Energy Smart LED lamp produces 1600 lm – the equivalent of a typical 100W incandescent. Yet the LED lamp consumes 27W and is rated for 25,000 hours of life. The lamp features a 3000K CCT and is dimmable.

Jim Balthazar, CEO and president of Nuventix, said, "Once we came together last year, our teams wasted no time getting in the lab to build on the genius of GE's LED bulb design, and to incorporate a synthetic jet solution that enabled GE to leapfrog its competitors." GE said the Synjet was critical to cooling the lamps that maintained the standard A-19 size and shape.

GE introduced a 60W-equivalent lamp at Lightfair last year, and a 40W equivalent the year before. But the company leapfrogged the 75W space and caught up to Philips and others that had already begun shipping 75W-equivalent products.

Still, consumers will have to wait a bit to get their hands on LED-based 100W replacements. GE has said that it won't ship the product until the first half of 2013, and for now is not pricing the product.

Philips said it will begin shipping a 100W-equivalent lamp in its EnduraLED line in the Q4 of this year. The new lamp looks virtually identical to the 60W and 75W EnduraLED retrofit lamps that are broadly available. The family uses remote phosphor technology and the lamps have an orange/yellow tint when not powered on, whereas the GE lamps look white. Both the Philips and GE products have cooling elements that extend up onto or into the globe making them easily distinguishable from incandescent bulbs.

The new Philips lamp uses only 23W and produces almost 1700 lm according to Philips. The 2700K lamps will have a CRI of 80 and will be dimmable. Philips has not priced the lamp as yet, but said that the lamps will save buyers $211 over a lifetime of 25,000 hours.

Philips also offers PAR and BR type lamps in its EnduraLED product line, and at Lightfair will introduce new models that include a technology called Airflux that eliminates the heat sinks that are typically prominent in LED-based PAR and BR retrofit lamps. Philips hasn't revealed the details of Airflux yet, but we expect to learn more about it at Lightfair later in the week.

The new lamps include a choice of three color temperatures and beam angles. Philips said the lamps save 75% in energy relative to PAR halogen lamps or BR incandescent lamps. The PAR retrofits are directional whereas the BR lamps provide diffused light with a new optical design.

"Airflux lamps blend into existing white track and recessed fixtures, and offer equal light quality to that of traditional light sources – attributes that lend themselves to a more pleasing environment in retail stores, hotels and restaurants," said Ed Crawford, general manager of lamps, lighting electronics and controls for Philips.

Moving back to the A-lamp space, expect more news in the 100W-equivalent area later this week. Osram Sylvania showed a prototype of a 100W-equivalent lamp at Lightfair last year. Switch Lighting launched their 100W equivalent two months ago. And Lighting Science Group is also a potential player at the 100W level.