LED lighting will augment natural lighting from an adjustable roof-light system, improving the quality of the lighting scheme while reducing energy consumption. 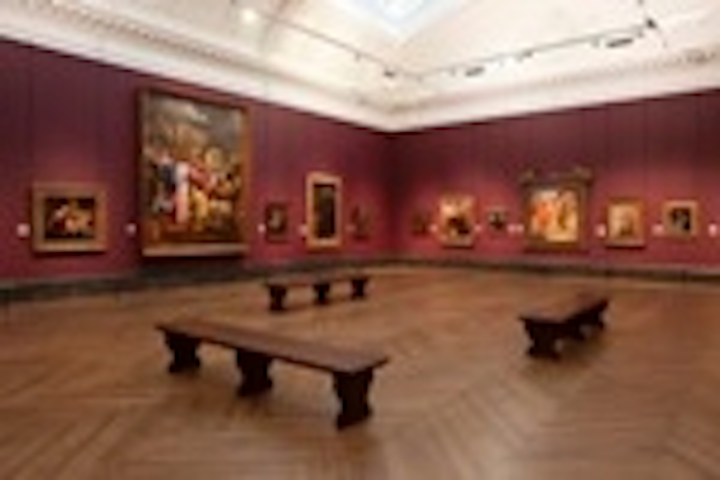 Over the next two years, the National Gallery, London, will install indoor LED lighting throughout its galleries, which will significantly reduce carbon emissions and improve the quality of light.

The Gallery claims that it will be the first institution in the world to use LED lights in conjunction with a system that automatically adjusts external roof-light blinds according to the amount and angle of sunlight. This ensures that only diffused light is present in the galleries through UV-filtered roof-light glazing.

The new LED lighting system will slowly augment the natural light as needed, as opposed to the old system that can be distracting to visitors by going on and off abruptly. This is possible because LED lights can be dimmed with no change in color temperature, a major advantage compared to tungsten lamps.

In the last three years, the National Gallery has explored ways to improve the quality, ease of control and efficiency of its picture lighting systems. During this period, improvements to LED lights have made them viable options both as general light sources and for specialist applications to illuminate works of art in museums and galleries.

As a result of these successful trials, the Gallery has decided to install the lights in all galleries in the main Wilkins Building and in the Sainsbury Wing. The new lighting will not only improve the public’s enjoyment of the collection, it will also reduce the Gallery’s emission of carbon dioxide by 400 tonnes each year.

This major initiative to replace all lighting in the galleries with energy-efficient, low-maintenance LED lights will reduce the Gallery’s lighting energy consumption by 85%. The Gallery believes that the lifetime of the LED lamps is 25 times greater than that of the current tungsten lights, leading to a significant reduction in maintenance costs.

A further benefit of the new lighting system, according to the Gallery, is that it does not produce any UV light, meaning that filters and the associated optical losses can be eliminated.

The National Gallery will install the lights in the Sainsbury Wing in a program from July 2011 to March 2012, and will complete the installation in the Wilkins Building by the spring of 2013. The use of the LED lights throughout the picture galleries will greatly contribute to the Gallery’s overall carbon footprint reduction target of 43% that it is aiming to achieve by 2014/15 through its Carbon Management Plan.