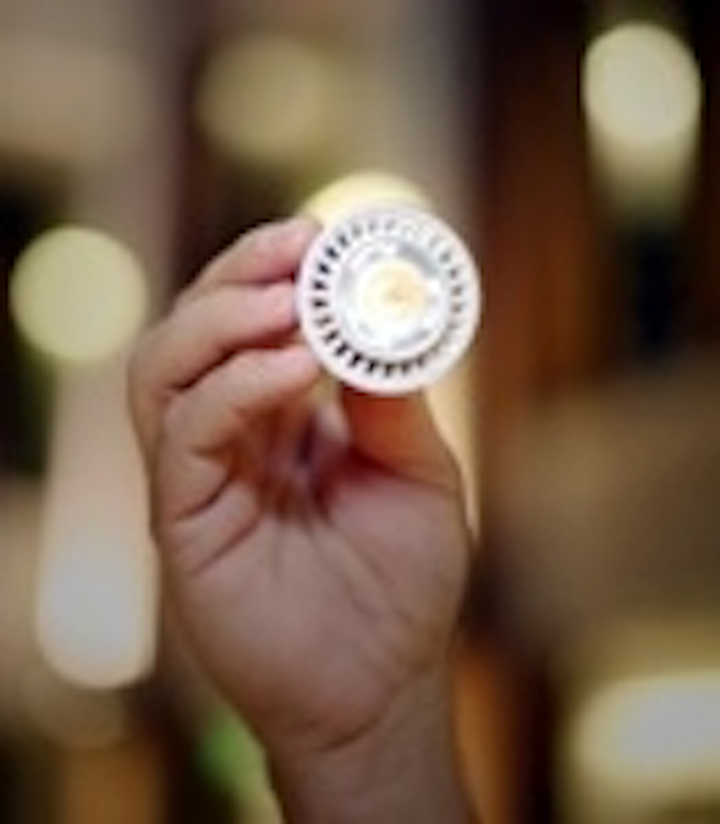 In the case of the Vanderbilt retrofit, the university sought energy savings, a reduction in maintenance costs due to longer lamp life and less radiated heat, and green benefits. “LEDs last a minimum of five years compared to the halogens which had to be changed out every two months,” said Paul Netter, the Plant Operations manager who initiated and helped to complete the changeover. “Halogens also produce heat that degrades wiring and connectors. And the LEDs have no mercury in them like fluorescent fixtures, eliminating any disposal issues.”

The retrofit in Buttrick Hall included only 150 halogen lamps, but will still result in a reduction of the production of 34 metric tons of greenhouse gas (GHG) emissions per year according to the university. “Going with LED lights made the most sense,” said Netter. Funding for the project came from the university’s College of Arts and Science.

Vanderbilt has also deployed LED lighting in other campus locations both indoors and out. The university has replaced incandescent lighting on the perimeter of several buildings with SSL technology, and is in the process of converting its outdoor pole lights to SSL.

“Projects like this are forward-thinking and what helps Vanderbilt continue to reduce our energy consumption and GHG emissions,” said Andrea George, director of the Sustainability and Environmental Management Office. “Vanderbilt emits GHGs primarily through campus building energy consumption.”

“Anywhere we can change 24-hour demand lighting to LED, we plan to proceed if existing lighting parameters can be sustained,” said Netter. “Elevators are another critical lighting area we plan to target.”

In the Pasadena Central Library, the SSL retrofit will generate energy savings but the maintenance angle is perhaps just as important. As is evident in the nearby photo, the pendant lamps that were retrofitted are suspended from a very high ceiling making regular replacement of the metal-halide lamps a real maintenance problem. The city expects that SSL with a longer life expectancy will annually save “thousands of dollars for periodic bulb and ballast replacement.”

Still, the energy savings are significant. “Every light at the library that we replaced was using 900 watts of ballasted power consumption and we helped reduce that by nearly 90%,” says Pervaiz Lodhie, CEO of LEDtronics. “Not only does the LED lighting in the pendant fixtures save greatly on power but because of the low heat they generate, the room temperature is dramatically reduced so as to save on the air-conditioning cost.”

The retrofit actually involved two separate LED light sources that were installed in each pendant fixture. LEDtronics used the 95W cluster of LEDs mounted at the top of the lower pendant bowl that are directed upwards into the pendant reflector surface distributing light downward. LEDtronics added a 17W LED lamp at the top of the fixture for uplight to the high ceiling.

According to LEDtronics, the city will save 788W for each of the 30 retrofitted fixtures. Based on the library business hours, that equates to 50,000 kWh per year in savings. Moreover LEDtronics states that the new lights deliver “higher task area footcandle measurements” than the old lights.

The green blog EarthTechling did wonder about how one well-known contingency might judge the new lights. In a story about the SSL retrofit, the blog noted that movie producers frequently use the library for film shoots and wondered whether that might change with the LED lighting.

In LED retrofit technology, some new bulbs and controller technology were announced right at year end. Elemental LED announced new 7W and 9W replacement lamps that according to the company produce the equivalent light output of 40W and 60W incandescent bulbs. The SSL lamps cost $29.99 and $39.99, respectively.

Sharp, meanwhile, announced a new controller IC for LED ceiling lights that is designed to allow consumers to adjust the color temperature of their lights. The LR56001 leverages three separate control channels to drive three strings of LEDs with different color temperature. The design is meant to allow a consumer to set brightness levels and choose from cool white, warm white, and night light color-temperature settings.