Martin Goetzeler, CEO of Osram GmbH, was a Keynote Speaker at Strategies in Light Europe 2010 and discussed some of the major issues related to the transition to LED lighting. 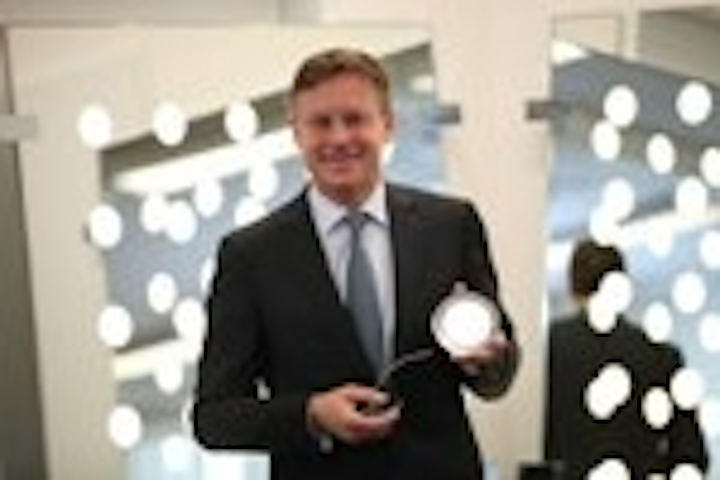 Martin Goetzeler, CEO of Osram GmbH opened the main conference by discussing the decision makers who are shaping the future of light and are asking questions on two main subjects. “These are how can we save energy, and how can we optimize the quality of life,” he said. “LED lighting contributes to both in a significant way.”

FIG. 1. Martin Goetzeler, CEO of Osram GmbH, opened SIL Europe 2010 and spoke briefly about OLED technology, which he said “creates even more opportunities in lighting going forward, and is complementary to LED technology.” He estimated that OLED is 4-5 years behind LED in terms of mass production. Osram Opto showed its new PirOLED luminaire at the show, and also announced that it is building a pilot OLED production line in Regensburg, Germany.
+++

Saving energy is clearly very important for decision makers. “Many companies have CO2 on their agenda as a business target,” said Goetzeler. “They can save up to 60% of the energy used in lighting by converting to LEDs.” However, cost efficiency is also very important, and the total cost of ownership must be considered, which includes acquisition, maintenance and replacement, as well as the energy costs. Goetzeler said that LED efficiency has increased from 30 lm/W to 150 lmW within 7 years. “Osram invests close to 50% of its R&D budget into LEDs at present,” he said, “but the company is also trying to drive the entire value chain.”

A major challenge is the need for information and education among consumers. In a survey, more than 50% of participants under-estimated the energy-saving potential of CFLi lamps, while one-third had no opinion about LED lamps, since they had no knowledge of the products. For this reason, said Goetzeler, Osram is launching a consulting campaign in DIY and retail stories in 10 European countries, lasting for more than half a year. This will explain to customers the difference between incandescent and energy-saving lamps, including LEDs.

On the professional side, Osram conducts energy audits to demonstrate the possibilities. For example, in the state theatre in Kassel, an audit revealed the potential for 70% energy reduction through the installation of LED downlights. As shown in Fig. 2, the maintenance and energy-cost savings with LEDs offset the initial investment. And, under a performance leasing contract, customers have a positive cash flow from the outset, because the energy saving is higher than the amortization and financing costs.

In the Q&A session, a questioner said that the energy lobby in France is trying to convince people there is not much point saving energy with lighting because you just increase the heat to be produced by the heating system. Goetzeler responded that “you only have the answer if you look at the whole building,” which includes heating, air conditioning etc. In fact, Osram is able to offer energy audits for the entire building in partnership with Siemens' Building Technologies group.

The second question, relating to quality of life, has four main aspects, said Goetzeler: security, comfort, design and entertainment. Using the example of a car, he said that LEDs provide the technology behind advanced and adaptive forward lighting, but also enable pre-crash and pedestrian sensors, night-vision systems, color-on-demand for interior lighting, and drowsy driver detectors, which all contribute to the different quality-of-life aspects.

The need to provide comfort at work raises the question of how to cover the circadian cycle in daily life. “We have to try to copy what the sun is doing, and shift from 8000K to 3000K,” said Goetzeler. Outside, modern street lighting makes “streets more secure, and makes cities remarkable,” he said. Energy efficiency is one aspect, but beautification is another, and adds to the character of the city. Architainment and façade lighting can have the same effect. “LEDs allow light to become a building material,” said Goetzeler.

The market opportunities addressed by Osram are expected to grow at a CAGR of 10-11% from 2010 to 2015, at which time the share of SSL and traditional technologies will be 65:35 (compared with 40:60 in 2010). This includes all applications where Osram is active, and does not include luminaires. In the Q&A session, Goetzeler was asked whether bulbs and tubes are going to disappear. “It's not impossible, but will take more than 10 years,” he answered. “It will be necessary to exchange the entire installed lighting inventory.” He also explained that Osram is still working in other lighting technologies, and still sees significant potential in HID lamps, for example, since LED will not take over immediately.

With regard to pricing, Goetzeler said that double-digit reduction in pricing of LEDs will continue for a couple of years. “On the other side, if you come down too quickly, you might risk that the innovation stops,” he said. “You have always to balance between what is the right price and how do we still get innovation, because we still have some work to do in order to optimize the LED itself and the solution.” When asked about competition from Chinese manufacturers, he said that everything should be on a level playing field. “Companies that carry IP should be treated fairly,” he said.