The city's traffic might be bad, but the view across the Red River just got more spectacular with the latest installation of Color Kinetics LED lighting. 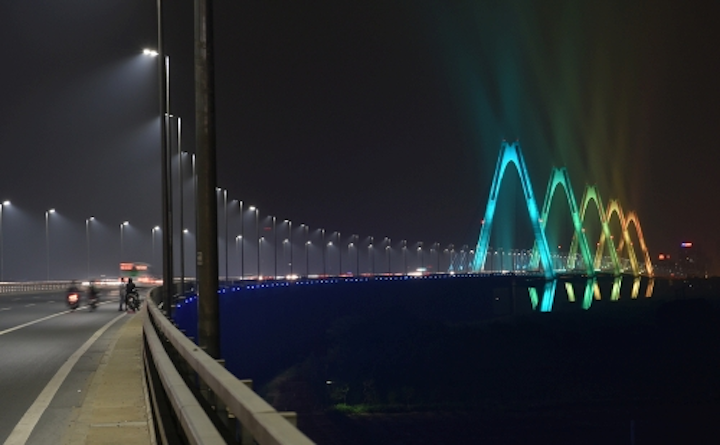 The city's traffic might be bad, but the view across the Red River just got more spectacular with the latest installation of Color Kinetics LED lighting.

Road congestion is a huge problem in Hanoi, but at least part of the traffic picture is getting prettier. The modern, five-mile-long cable-stayed bridge that crosses the Red River and helps connect the city to its airport is now a colorful work of changing LED art at night.

LEDs Magazine defies any reader to spot the difference between, say, 16.69999 million of those colors with their naked eye. But let's not get snarky. The point is, Color Kinetics allows the lights' operator to order up an ever-changing palette, using a Philips cloud-computing control system called ActiveVision. 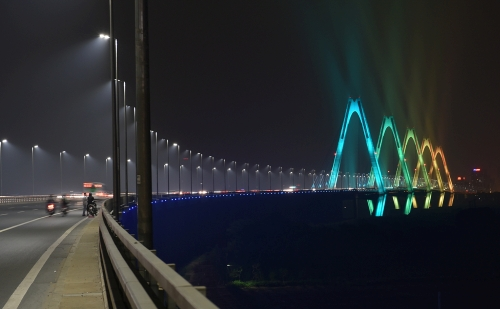 “Each night, the new lighting system bathes the bridge in a prism of colors, turning the structure into an ever-changing work of art,” a Philips spokesperson said. “The new architectural lighting illuminates the five majestic spans, along with the cables that run high above the bridge.”

Built with Japanese financial backing and technology, the six-lane Nhật Tân Bridge opened in January 2015 as an icon of Hanoi's modernization, forming part of a new highway to and from the Noi Boi International Airport. The bridge's five pointed arch towers symbolize the five ancient gates of Hanoi. The Philips system can change the color of the towers and of the cables that run between them and the bridge, suiting different events, celebrations, and so on.

The 109-ft-wide bridge marks a start contrast to Hanoi's famously congested city roads, clogged by an estimated 5 million motorbikes and other vehicles. The city has just passed a law banning motorbikes and scooters by 2030 to help alleviate the jam-ups and mitigate a horrendous air pollution problem. It is also pouring resources into developing public transportation, having opened a rapid transit bus system earlier this year and planning to open a monorail next year.

But those who can maneuver through the gridlock and get to the bridge should be rewarded with a colorful light display at night.