SSL building-crown lighting allows the owners of the John Hancock Center to dynamically change the iconic lighting to celebrate holidays, changes of the season, or Chicago’s popular sports teams. 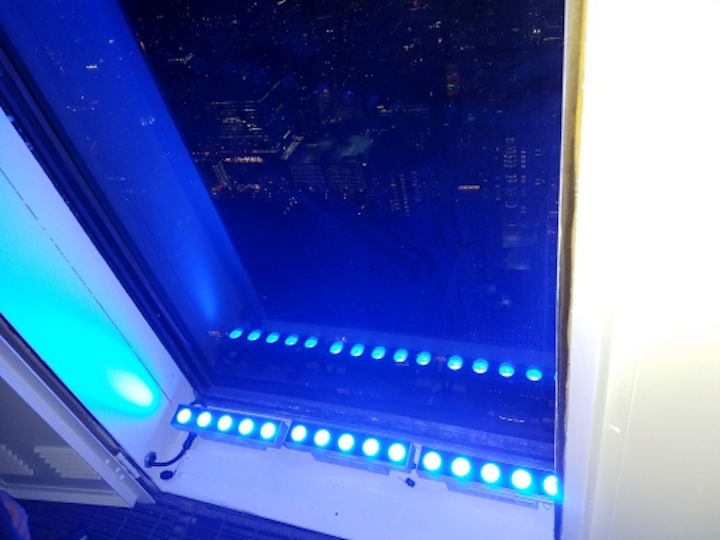 SSL building-crown lighting allows the owners of the John Hancock Center to dynamically change the iconic lighting to celebrate holidays, changes of the season, or Chicago’s popular sports teams.

Acclaim Lighting has announced an architectural lighting retrofit atop the 1499-ft John Hancock Center that stands in a prominent Chicago, IL location on Michigan Ave, just of Lakeshore Dr near Lake Michigan. The new LED lighting replaced a legacy Crown of Lights that surround the building on the 99th floor and that can be seen from 360° for miles. The new solid-state lighting (SSL) system is controlled via DMX by an engineer sitting in a comfy office on the 16th floor of the skyscraper. Watch a short video below to see the lighting in action.

The Hancock building is certainly not the first façade or architectural lighting project on famous buildings intended primarily to entertain visitors and residents based on changes in the calendar or wins by sports teams. For instance, New York City even installed a dynamic LED system on the exterior of its iconic Madison Square Garden sports venue. And a few years ago, we covered a project in Miami that lit the entire façade of a skyscraper.

Still, the Chicago project stands out both because of the fame of the building that is a top tourist attraction and the unique aspects of the installation. The prior system was decidedly low tech. There were 552 T12 fluorescent tubes mounted around the 99th floor. Those tubes could clearly produce a white crown. When the building owners wanted to change the colors, engineers manually removed each tube and slipped a colored plastic sleeve over each. The process required two workers to spend 40 hours on the process, and therefore the colors were only changed five to seven times each year.

The good news was that the tube-change process happened safely indoors, but the system was clearly in need of an upgrade. Contractor Lombardi Electric and electrical equipment supplier Connexion initially consulted on the project that presented surprising challenges.

“Changing out the T12 fluorescents to LED seems like a logical, easy choice, but finding something with the right output and the ability to still give the bright white light, which is the scene preference most of the time for the building, made the mock-up phase of the project critically important,” said Kyle Hanson, executive vice president project sales at Connexion. “We didn’t want to do this change-out and then find out that we couldn’t get a true white effect.”

Indeed, both the white light and dynamic colors that were desired were problematic because the lighting had to be installed in the vertical windows that had previously housed the fluorescent tubes. Many of the red, green, blue (RGB) or RGB plus white (RGBW) fixtures on the market have the distinct color emitters mounted in a repeating linear sequence, and such fixtures rely on color mixing to happen in the output beam. But the space inside the window glass would not allow for proper color mixing.

Manufacturers’ representative PG Enlighten was also involved in the project and represents Acclaim Lighting, and together with Lombardi evaluated the Acclaim Pixel Graze luminaire. “We knew Pixel Graze was ideal for the Crown of Lights because of its unique quad chip that delivers bright pixel control,” said Lisa Bernacchi, specification specialist at PG Enlighten. What Bernacchi meant by quad chip is that in each emitting cell of the Pixel Grace linear luminaire, there are RGBW LEDs and the colors are mixed in the fixture.

Working with a mockup, the team developed a scheme where a mix of 2-, 3- and 4-ft Pixel Graze luminaires were mounted in cabinets installed just inside the windows (see nearby photo). The cabinets are 15 in. deep and stand 12 ft tall. The cabinet interior is painted white to reflect all the light out the windows, delivering on the desire for residents to clearly see the white light or colors. 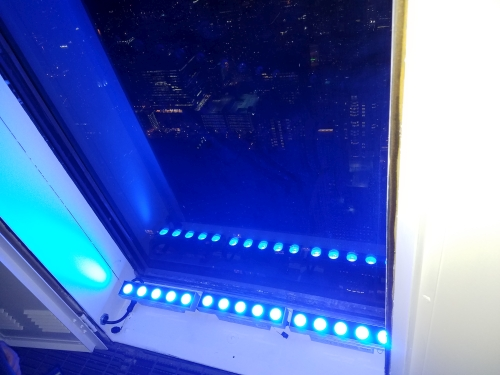 The new system is a clear winner in terms of dynamic control. An Acclaim ART 500 DMX controller in the engineer’s office can store 500 preset scenes and scenes can easily be set via a touchscreen. Three DMX splitters and 600 ft of cable link all the luminaires.

“Overall, the biggest accomplishment is being able to change the color and scenes on the Crown by just pushing a button,” said Doug Lombardi, president of Lombardi Lighting. “The John Hancock Center now has the option of 50 different scenes with the touch of switch, which has a positive, major effect on the local community. The lighting can now keep up with all the activities of a magnificent city.”

The project is also delivering in terms of return on investment. The 8-ft T12 tubes had totaled 57,408W in power consumption. The new lighting includes 72 4-ft, 24 3-ft, and 8 2-ft fixtures. The total power usage is 9400W for an annual electrical savings of about $21,000. But the maintenance costs associated with changing the fluorescent fixtures manually had been around $80,000 per year and that cost has been eliminated entirely.