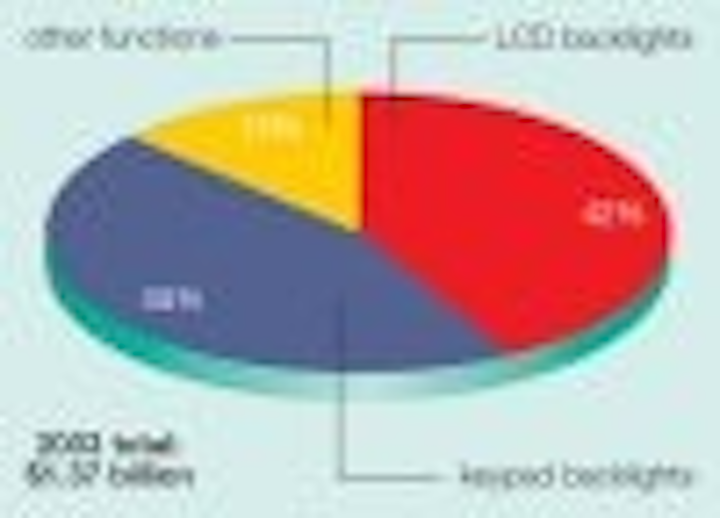 The market for high-brightness (HB) LEDs is currently one of the fastest-growing sectors for compound semiconductor devices. At the annual Strategies in Light conference held in San Mateo, CA, in February 2004, analyst Robert Steele told delegates that the market grew 47% in 2003 to reach $2.7 billion. Steele's figures show that the HB-LED market has grown 350% since 1995, which also represents a compound annual growth rate (CAGR) of 47%. Steele calculated that a significant part of last year's increase arose from the relative weakness of the US dollar (Steele's estimate was that this factor had an impact of 10-15%). However, the key growth area continues to be mobile handset applications. Phones with full-color displays and blue-backlit keypads have ensured that this segment continues to dominate, with HB-LED sales into the mobile appliance market booming 87% to reach $1.37 billion last year.

Steele's latest figures showed that mobile appliances accounted for 50% of the HB-LED market in 2003. Signage was the next-biggest segment with 18%, followed by automotive applications at 15%. Illumination accounted for 5% of current HB-LED sales. All these segments enjoyed solid growth, with a minimum of 21% market increase, in 2003.

Steele now expects the mobile market to start leveling out, putting a brake on the overall market growth. He predicted that the CAGR for HB-LEDs will fall to 17% between now and 2008. Price erosion will also start to have a bigger impact. However, for high-end devices, where there are relatively few suppliers, prices are expected to remain close to current levels.