The US Department of Energy released a report on the Detroit, MI SSL street light conversion that is also enabling a restoration of infrastructure that was aging or had been stolen. 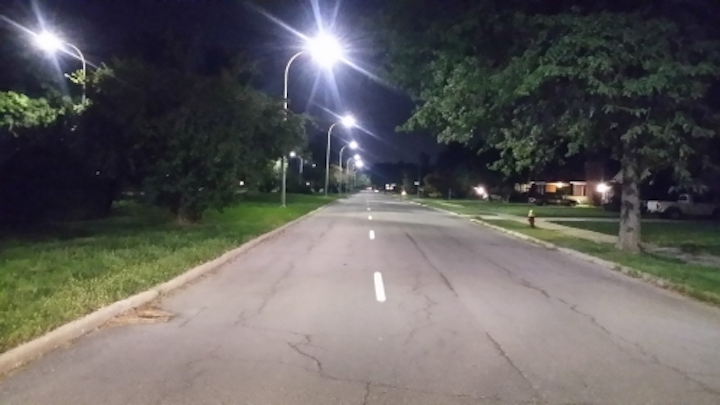 The US Department of Energy released a report on the Detroit, MI SSL street light conversion that is also enabling a restoration of infrastructure that was aging or had been stolen.

The US Department of Energy (DOE) has published a new report — "Restoring Detroit's Street Lighting System" — that provides an update on an LED street light project announced last year and that the DOE has assisted with in a hands-on manner. The project is about two-thirds complete and will ultimately include installation of 65,000 solid-state lighting (SSL) luminaires. The project was intended to restore street lighting in Detroit, save energy, and boost the local economy.

The Detroit project began in earnest back in 2013 as the city declared bankruptcy. The city had 88,000 legacy lights at the time and only around half were operational. The failed lights in some cases just had failed HID lamps or ballasts, but in many cases vandals had stolen wire and transformers from the poles in the cash-strapped city.

Michigan's governor appointed an Emergency Manager who created a Public Lighting Authority (PLA) that began to consider how to address the problem. Indeed, the financial burden was even bigger on the city than it might seem because based on an unmetered tariff, it was paying for energy on the working and non-working lights in the inventory. 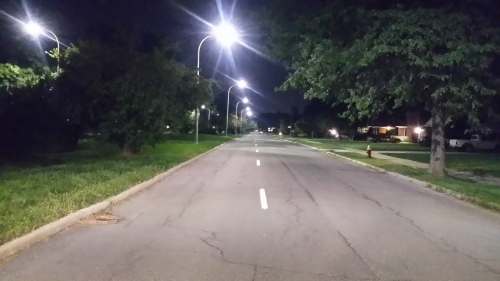 With so many lights out, projections of the cost of new lighting and a comparison with the existing system had to be based on an assumed scenario in which all of the lights were working properly. The PLA and DOE speculated in the analysis that LED installation would save almost $3 million in electricity annually and more than 45 million kWh of electricity.

The PLA knew from the start that a couple of aspects of the project would be unique. The street light system infrastructure would have to be as much a part of the project as the luminaires because of deterioration and vandalism. Moreover, the city would not need a one-for-one retrofit for two reasons. The original lighting had been installed on an ad hoc basis and the new system would use a lighting design. And some areas of the city have simply been abandoned due to the financial crisis.

Initially, the PLA settled on 50,0000 lights but knew that plan would not be sufficient to safely light the city. Ultimately, the number was raised to 65,000, although as we will discuss, that number is also shy of ideal.

The consideration of LEDs compared to legacy sources resulted in a simple quick conclusion that more-efficient SSL was the correct route. The comparison of strictly the two luminaire types, ignoring pole, wiring, and other costs, was projected to payback in 2.3 years just for the LED luminaires and assuming the remainder of the project would be undertaken regardless. That projection did not take into account the ultimate fact that LED-based products enabled the city to install lower-cost aluminum wiring.

Still, the project was a compromise. In some residential neighborhoods on a typical 600-ft block, the city installed a light on each corner and one in the middle of the block. That design provided excellent light levels in intersections but does not meet IES RP-8 guidelines in the middle of the spans between poles. But the PLA correctly moved forward under the presumption that the wider pole spacing would be a huge improvement relative to the system with half the lights out.

As of August 2015, the city had completed installation of 48,000 LED street lights and expects to complete all neighborhood lighting by the end of the year. The upgrade on thoroughfares will be handled in 2016. The use of LEDs in 65,000 lights compared to high-pressure sodium (HPS) lamps will save $2.4 million annually.

Funding for the project came from a short-term loan and issuance of longer-term bonds. The PLA worked with the Michigan Finance Authority on the bonds. The debt service is being covered in part by a $12 million annual allocation from a utility user tax.

Citizen response has been mostly positive, especially given that many of the older lights didn’t work at all. But the longer pole spacing has been at the center of some complaints.

Detroit Mayor Mike Duggan addressed those complaints at a DOE Workshop held in Detroit in November 2014. Duggan said some residents would say, "I had a light in front of my house. As far as I was concerned Detroit didn't have a lighting problem." Duggan pointed out that such complaints came primarily from people who had not attended widely-promoted meetings on the street light project to which citizens were invited. The attendees of those meetings learned about the level of problem the city faced and the justifications behind the decisions made.

The Detroit project was one in which the DOE was deeply involved as it was part of the Outdoor Lighting Accelerator (OLA) program that was announced by US President Barack Obama in the summer of 2014. Early in 2015, President Obama tripled the goal of the OLA calling for 1.5 million lights to be converted to SSL by May of 2016. At the IES Street and Area Lighting Conference, held October 5–7, 2015, Crystal McDonald from the DOE Office of Energy Efficiency and Renewable Energy provided an update and said there are now 20 active participants in the OLA program installing LED street lights, with nine months remaining in the program as presently defined.

Meanwhile, at the aforementioned DOE workshop last year, the interest from the DOE and the Federal Government in the Detroit project was clear. Byron Auguste, who at the time was the deputy director of the National Economic Council and a member of President Obama's staff, spoke at the workshop and said the Detroit project would lift the local economy with the DOE and the lighting suppliers training local citizens to do the work. Moreover, Auguste said the lighting was needed so school kids would feel safer and vandals in general would be deterred by the new lighting.

You can download a complete copy of the DOE report on the Detroit project at the DOE SSL website.