An LED task light, a giant LED spider's web and a power LED from GE were among the winners at this year's Lighting Design Awards. 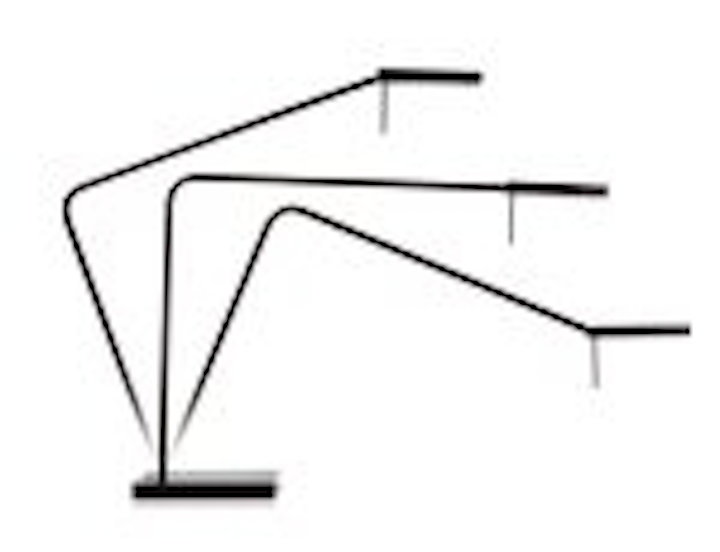 Three innovative products and 11 outstanding projects were the winners of this year’s Lighting Design Awards, presented in London on March 12. Projects were as diverse as they were distinguished, with a sublime cathedral and an urban gym sharing the laurels with a glistening 50m wide spider’s web and a luxury apartment on the Strand in London. The Lighting Designer of the Year – sponsored by DW Windsor - was named as Lee Prince, partner of Light + Design Associates. The practice is proud to have no house style, and tailors each of its designs to suit the location, ambience and architecture of the project. Prince was cited by the judges for his ‘tremendous versatility and skill’ in delivering these diverse range of projects. ‘Whereas some lighting designers develop a style and bring a similar approach to their schemes, Lee produces highly varied but appropriate solutions according to the nature of the project.’

Light + Design Associates also won the Lighting for Leisure category – sponsored by Lutron Lighting Controls – for the Gymbox 3 in Threadneedle Street, London. The scheme exploits the space’s dependence on artificial light to create a hard-edged, contemporary answer to the conventionally bland gym. ‘The rugged interior of former bank vaults is directly complemented by the almost industrial feel of the lighting equipment,’ commented the judges. ‘Colour was used dramatically to give excitement and theatre to the task of working out.’

Arup Lighting won the Special Projects - sponsored by Cooper – for the Web of Light in Liverpool (see photo). Created by Chinese artist Ai Weiwei, the 8m-long spider and its 50m steel web was a challenging lighting proposition. A series of RGB fittings cycle coloured light over the 5,000 glass crystals that cover the spider’s body. Inside, 60 miniature LED spots form the spine and each of the spider’s legs is wrapped with four lines of white LED strings to create a sense of movement. ‘This is a compelling piece of public art whose well-judged and executed lighting is intrinsic to its success,’ said the judges.

In the Interior Luminaires category, sponsored by Lumicom and Recolight, the judges selected as its winner the Luxo Ninety. Described by the judges as ‘beautiful’ and ‘an instant classic’, the Ninety LED task light is spare and elegant in design but packs a punch.

In the Light Sources and Controls section, GE Consumer and Industrial triumphed with the Vio high power white LED, which judges cited for its “colour stability”. GE put out a separate press release on its award.

Martin Professional won the External Luminaires category for the Exterior 1200 Image Projector, which boasts CMY colour mixing and a powerful 1200W light source. It was hailed by the judges as ‘a great engineering achievement’ and ‘unique in its abilities’. With motorised focus and zoom, it has a 0-100 per cent intensity control, high optical clarity, and uniform distribution of light and colour.

The Studio at the Andaz Hotel in Liverpool Street, London won the Hotels and Restaurants category for Elektra Lighting. The outstanding feature of the scheme is the backlit Wovin Wall ceiling, the first time the material has ever been treated in this way. ‘In spite of the hotel’s policy of not having fluorescent in public areas, the lighting designer proved it could work exceptionally well,’ said the judges.

Pritchard Themis designed the winning scheme in the Exterior category, sponsored by Philips Lighting. Its design at the Q House in Sandyford, Dublin was described by the judges as ‘dramatic’. A grid of 3W red LEDs was set between timber planking, so the lighting creates different effects when viewed from different levels. As points of interest, a tree was uplit in warm white while its ‘reflection’, a freestanding mobile opposite, was lit from above with cold white light. ‘As it gets dark, the courtyard becomes a spectacular, theatre-like space,’ said the judges.

Kevan Shaw Lighting Design won the Public Buildings category for The Public, New Street, West Bromwich. An arts and cultural centre with theatre and conference facilities, The Public features specific treatments that range from the visual excitement of pink neon scrawled across the ceiling to the simple fluorescent fittings which are programmed to follow the flow of people. ‘This is an exciting and vibrant lighting scheme which enhanced a well-planned space,’ said the judges. ‘The lighting provides a lot of the visual interest and makes the space work.’

Firefly Lighting Design won the Residential category - sponsored by Concord – for a residence in the Strand, London. There is a high degree of customisation and every detail has been carefully considered, from the low voltage fittings which dim up for arrival in the lift lobby to the LEDs concealed in niches, around the bath base and over the shower in the bathroom. The judges verdict: ‘Picking up the 1930s themes, the lighting design has been skilfully executed. This a is a very precise and carefully considered scheme.’

A striking scheme at Niketown in Oxford Circus, London took the gong in the Retail category – sponsored by Conciluce – for dpa lighting design. Backlit Barrisol panels evenly light some areas of display while strong accenting with track and spots or recessed gimbals gives dramatic contrast elsewhere. All lighting is optically well controlled, flexible and energy efficient. ‘This is a highly complex scheme in a challenging space, not least because of the dark surfaces,’ said the judges. ‘The lighting met the challenge.’

Maurice Brill Lighting Design created a striking scheme for 133 Houndsditch in London, which saw it take top honours in the Workplace category, sponsored by Wila. The lighting is notable for accentuating structure and texture. The spine of the scheme is a black, inclined feature wall that starts at the entrance, wraps behind the reception and ascends into the atrium. According to the judges, this was ‘an excellent integration of light and architecture. There is a particularly skilful use of reflected light in the lift lobbies. It was a bold decision to use indirect light as the only source in that space.’

Pinniger and Partners took the Low Carbon category - sponsored by Etap Lighting – for the British Airways lounges at Terminal 5 at Heathrow Airport. With a brief to create a boutique hotel environment with as small a carbon footprint as possible (15W/sq m), this scheme was about the dichotomy of luxury and low energy. A key technique was layering, using subtle light coves and backlit coloured panels of glass, and creating views and vistas through layers of translucent materials. The main light sources are fluorescent and LEDs, with tungsten halogen used for accenting only where necessary. ‘The overall composition skilfully demonstrates how low energy sources can be used successfully in luxury environments,’ said the judges.

Light + Design Associates triumphed in the Heritage category - sponsored by Dynalite – for the interior of Salisbury Cathedral in Wiltshire. The new lighting scheme emphasises this symmetry as well as addressing the more prosaic issues of energy and maintenance. ‘The overall lit effect showed the interior to its best potential,’ commented the judges. ‘and this was not compromised by the difficulties of placing lighting equipment.’

The International category - sponsored by Oldham Lighting – was won by Speirs and Major Associates for the Armani Ginza Tower in Tokyo. This was several projects in one: facade, Emporio Armani and Giorgio Armani outlets, the first Armani Spa, restaurant and private bar with roof terrace. The gold leaf motif which begins with custom LED fittings against a bamboo backcloth for the facade is translated to a concealed ceiling feature in Giorgio and reiterated in the restaurant where dappled golden light in the form of a bamboo leaf motif is projected on to the floor. ‘This was an extremely exacting project,’ said the judges. ‘The challenges have been met with a high level of integration and beautifully executed detail.’