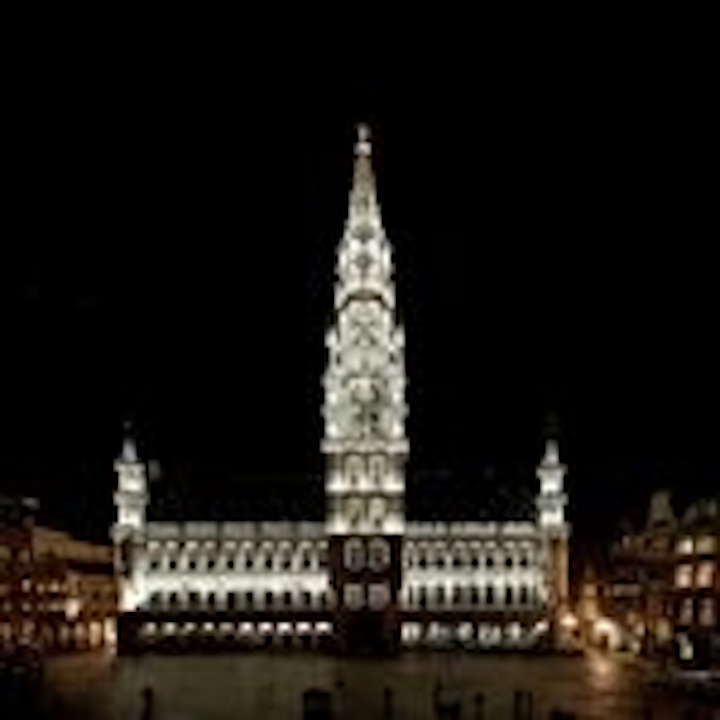 Five years after the city of Brussels and the Beliris collaboration of the Belgium state and the Brussels Capital region began planning to enhance the historic Grand Place central square, new lighting of the historic site is live on the City Hall structure. Solid-state lighting (SSL) from Schréder, including RGB LEDs, can wash the building and tower with soft white light or create dynamic colored lighting displays with choreographed audio for special events.

The Grand Place in Brussels is a United Nations Educational, Scientific and Cultural Organization (UNESCO) world heritage site, a popular tourist destination and home to world-renowned Gothic architecture. While the enhancement project maintains the historic look, the lighting retrofit brings modern technology to the site with an elaborate network-control system and the dynamically controllable lighting.

Lighting designers Isabelle Corten, Louis Dandrel and Patrick Rimoux created the plans for the SSL project. Fabricom is installing the lighting with the portion installed on the City Hall building activated in October coincident to a local election. Laurette Onkelix, the president of Beliris, and Freddy Thielemans, the mayor of Brussels, switched on the City Hall lighting in an inaugural celebration.

The City Hall is now lit by 1600 Schréder BaroLED floodlights that are linear fixtures with RGB LED arrays. The fixtures are discretely mounted on ledges and other architectural elements of the structure. Visitors see no evidence of the fixtures.

The networked system combines separate audio and lighting controllers along with both fiber-optic and Ethernet networks that link routers mounted throughout the building. The routers in turn use a DMX network to communicate with the intelligent fixtures.

Brussels had multiple objectives in developing a lighting plan for Grand Place that included both the desire for savings in energy and maintenance costs. The city also wanted to accentuate even the small details of the architecture, improve the ambiance for visitors, and enhance the identity of both Belgium and the city of Brussels.

The city took a painstaking approach to the project, defining a precise manner in which competitive proposals could be judged. The evaluation process was weighted with 30% of the decision based on price, 30% on actual on-site tests, 10% on fixture quality, and 30% on energy usage. The on-site tests, for example, revealed some of the proposed products didn’t deliver uniform light levels while others didn't render colors correctly.

The installed system based on the Schréder fixtures delivers 30% in energy savings over the prior lighting. Moreover, the city has the option of dimming the lights and reaching a 50% energy reduction. The new installation will reduce maintenance costs by a factor of four, and reliable long-life lighting was critically important given that many of the fixtures are difficult to access.

Progress on the overall Grand Place project continues, including lighting for other façades surrounding the square, and full installation of the audio and lighting control systems. Scheduled completion is June 2013 although the city will continue to enable new features as the work progresses. For example the city will shortly enable the next phase that includes "a sound and light spectacular" involving the City Hall, the King’s House and the Christmas tree.