After a completed R&D project with the Fraunhofer Institute for Reliability and Microintegration, Infineon, Hella, and Daimler, Osram is demonstrating a prototype of an LED headlamp hybrid module with more than 1000 pixels and integrated driver electronics. 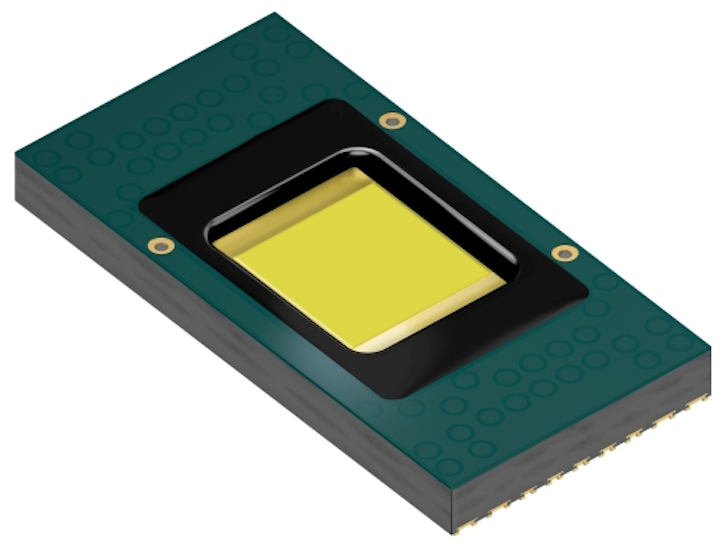 After a completed R&D project with the Fraunhofer Institute for Reliability and Microintegration, Infineon, Hella, and Daimler, Osram is demonstrating a prototype of an LED headlamp hybrid module with more than 1000 pixels and integrated driver electronics.

Osram Opto Semiconductors along with Osram Specialty Lighting has announced the demonstration of the Eviyos automotive LED headlamp module that could be the next advancement in automotive forward lighting beyond shipping adaptive drive beam headlights. The company is showcasing a prototype of the hybrid module this week at the ISAL (International Symposium on Automotive Lighting) event in Darmstadt, Germany.

Eviyos is the result of an R&D partnership coordinated by Osram and funded by the German Federal Ministry of Education and Research (BMBF). The other partners included the Fraunhofer Institute for Reliability and Microintegration (IZM), semiconductor-manufacturer Infineon, auto third-party OEM Hella, and auto manufacturer Daimler. We covered details of the R&D project called the μAFS Research Project last year and Osram said the partners completed the R&D work in 2016.

We have written quite a lot about adaptive drive beam headlamps at the component and module level. Osram has been a leader in the space. Just a month ago, the company announced a module that combined multiple LED segments or pixels and a silicone optic to enable auto makers to use the technology in mainstream vehicles. Typically, the technology works with camera assistance to sense oncoming traffic and changes in the road topography to alter beam direction, eliminating glare for oncoming drivers and providing the driver of the auto with the adaptive headlamps to better view the roadway.

Still, the Eviyos LED headlamp project takes beam control to another level with the ability of the electronics to independently control 1024 individual emitters or pixels as opposed to controlling three to a dozen groups of emitters that form larger pixels or segments. The key to the granularity is the integration of driver electronics and intelligence in the module.

“The hybrid LED is another example of our products making a major contribution to improving the quality of life in many different areas,” said Thomas Christl, marketing manager at Osram Opto. “With Eviyos we are helping to make the roads safer and improve comfort and convenience for drivers. We are proud that we can present the first prototype so soon after completing the research project. We are now another stage further toward series production.”

The usage of the word hybrid in the above quote is key in understanding the architecture of the module. In electronics and semiconductor industry parlance, a hybrid refers to a device that integrates multiple ICs and/or discrete semiconductor components on a substrate and that can be handled like a large IC, although it is not a monolithic device. In the case of Eviyos, the hybrid integrates the LED array, driver electronics, and intelligent control.

The hybrid LED headlamp module has a footprint of 4×4 mm. The prototype device can deliver 3 lm/pixel at a drive current of 11 mA. And Osram has demonstrated the ability to up the flux output to 4.6 lm/pixel.

Osram does not plan on selling the Eviyos LED headlamp modules commercially until 2020 — although with the long development cycles in the auto industry, development teams will be selecting 2020 components now if not earlier. Osram said some designs might utilize multiple Eviyos modules or combine one of the modules with more traditional LED headlamp components.