Passersby can text a message to control a new dynamic and interactive SSL sculpture located in the upper lobby of the 200 Clarendon Street tower in Boston. 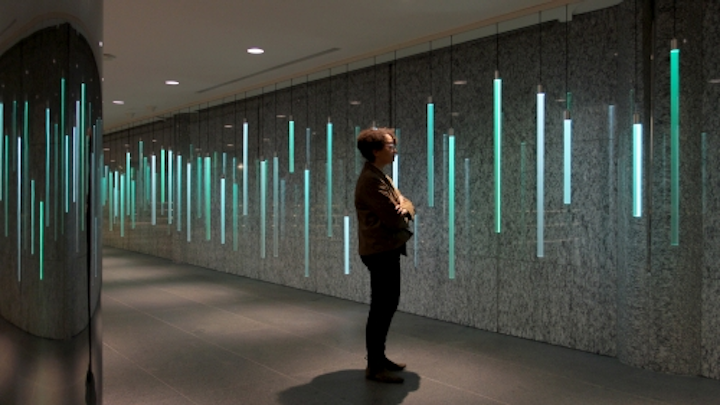 Passersby can text a message to control a new dynamic and interactive SSL sculpture located in the upper lobby of the 200 Clarendon Street tower in Boston.

Design studio Sosolimited has unveiled a new LED-based interactive sculpture called Colorspace in the upper lobby of the 200 Clarendon Street skyscraper (formerly called the Hancock Tower) in Boston, MA. The work was commissioned by Boston Properties, which owns and manages the building. Linear pendants are vertically suspended in what the creators call a “wave-like fashion” along a wall. Visitors can send a text message to the solid-state lighting (SSL) art project and the system will interpret the message and create a dynamic interpretation of the message that is displayed for ten minutes.

The LED lighting installation is creative in form and in how the interactive feature operates. The 70 pendants that comprise the sculpture were custom developed for the project. Each pendant is powered via the suspension cable with an LED light engine located in the cap at the top of the pendant.

The pendants were manufactured using an acrylic made by Okalux and that acrylic acts as a light guide. The acrylic includes what Sosolimited called microscopic particles that deflect light, resulting in uniform illumination along the length of the pendant. We covered light guide technology a number of times over the years, generally relating to planar lighting. Rambus, for example, has offered such technology on a licensing basis. And Cree has developed its own light guide technology. 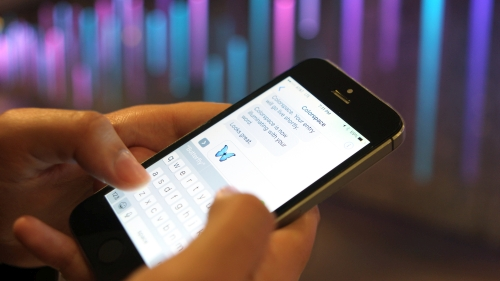 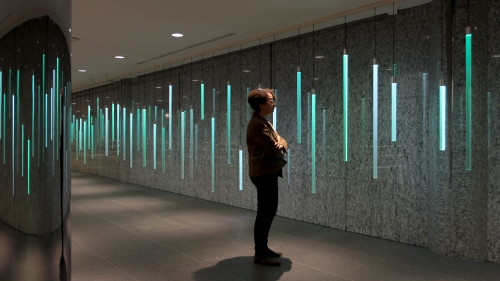 In the Boston project, each pendant can display a full palette of colors, although only one color per pendant at any given time. But the system can dynamically change the colors based on a preprogrammed sequence or based on a recently received text message. The video below shows how visitors and building tenants can engage with the artistic LED lighting installation.

Of course, the interactivity was a technical challenge. People can send anything in a text message. The studio developed an algorithm that performs a web search based on the received message. The algorithm then analyzes the images returned by the search looking at the pixels in the top results, and creates a color palette from those results. A search done today might generate a different result from a search done in a month based on the search results.

“You can literally send it any message, and it will translate your text into a unique color palette of shimmering light,” said Eric Gunther, co-founder of Sosolimited. “’Beach’ lights up the space with blues and yellows. ‘Watermelon’ gives you shades of pink and green. And ‘disco’ lights up the lobby with hot pinks and purples.”

For Boston Properties, the art installation differentiates their building and stands as a reminder to their commitment to the community. “We’re strong supporters of the Boston arts community,” said Laura Sesody, marketing director at Boston Properties. “We set out to commission an artwork that could evolve and respond to the people that see it every day. We’ve been thrilled with the response to Colorspace from our tenants. They can’t stop using it.”

And the art is intended to positively influence the people who work in the building. “The mezzanine at 200 Clarendon is a transitional space that sets the tone of people’s experience as they enter and exit the building,” explained Sosolimited designer Wes Thomas. “Throughout the design process we worked to create an experience that balanced change and excitement with calm and contemplation.”

Colorspace is far from the only interactive LED art project we have seen. We covered a Peru project a few years back in which visitors can control the façade lighting on a tall commercial building from a publicly-accessible pedestal.

Still, Colorspace is unique in the way it takes the text message and returns a custom color set and animation. If no text message is active, a person can send a text to the sculpture and see their display happen almost immediately. The results for each text are displayed for ten minutes. When there is a queue, the system replies with a text telling a person what time their message will be on display.