UV LEDs in the 280- and 310-nm bands will enable applications including sterilization and treatment of skin diseases such as psoriasis and eczema. 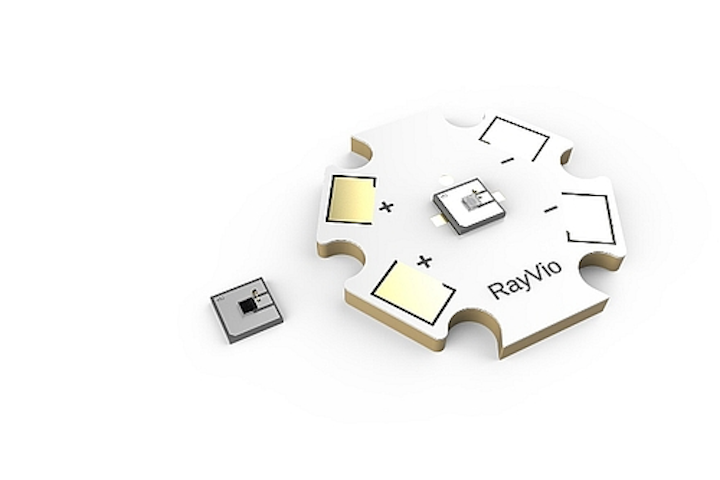 Ultraviolet LEDs in the 280- and 310-nm bands will enable applications including sterilization and treatment of skin diseases such as psoriasis and eczema.

Startup RayVio has announced the news XE Series of ultraviolet (UV) LEDs that are packaged similarly to mid-power visual-light LEDs in the so-called 3535 (3.5×3.5)-mm package. The XE Series LEDs are smaller in footprint relative to many high-power UV LEDs on the market. Still, with typical radiometric power output of 6 mW, the LEDs can enable consumer devices in the disinfection and phototherapy areas.

The market potential for UV LEDs is huge especially in the shorter wavelengths, as we first covered in an article on a Strategies in Light presentation two years back. Already UV LEDs are being widely used in longer-wavelength UV-B and UV-A bands for applications such as curing. But the UV-C band (100–280 nm) is the spectrum where UV LEDs can revolutionize sterilization and disinfection, yet the industry has struggled to deliver high output power and reliability at such short wavelengths. 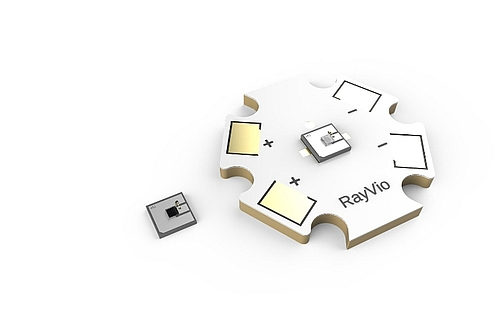 Much of the UV-C activity in the recent past has been focused on new milestones in radiometric power output in such LEDs. Indeed, RayVio has previously said that it hit 45 mW in a laboratory demo a year ago and now says that its 6565 XP Series can deliver 60 mW. Other companies are in a similar position, for example with Nikkiso saying it was delivering 50-mW devices earlier this year.

But with the XE Series, RayVio is following the same path that mid-power LED proponents followed in general lighting. The company will look for applications where the lower-cost components can play and it just so happens that some of those are in the consumer space.

RayVio said the 310-nm LEDs, which are in the UV-B band, can serve to treat skin diseases. Presumably the UV light can fight psoriasis, eczema, rickets, and jaundice, although there are no exact product roll-out plans in that phototherapy area.

In the disinfection area, meanwhile, RayVio is itself rolling out a product using the 280-nm LEDs. The company has previously described the Ellie product that is a self-contained and portable baby bottle sanitizer. The company is launching a social-funding campaign later this week focused on putting Ellie into mass production. The XE Series UV LEDs in Ellie can kill germs on surfaces and in air or water. RayVio says those LEDs could also find usage in toothbrushes, humidifiers, and refrigerators. 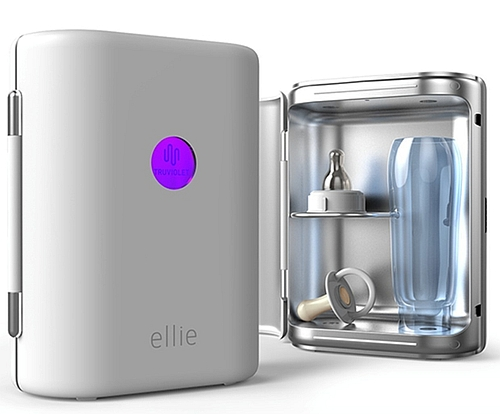 RayVio is marketing a portable baby bottle sanitizer that utilizes its own 280-nm UV LEDs.

While Ellie may depend on social funding, RayVio has received traditional venture capital. The company had raised $9.3 million in Series B funding back in March 2015.

The company has used the funds to advance its technology and it had said later that year that it expanded manufacturing capacity to produce more than two million UV LEDs per year. With the XE Series announcement, RayVio said it has delivered double the power output of competing devices in the small form factor. That's a tough claim to measure in that most of its competitors have been focused on larger LEDs. But RayVio says the advancements allow the smaller LEDs to serve in more applications or allow product developers to use fewer LEDs in new products.

Still, the LEDs are only rated for 1500 hours of life. That projection will be fine in a consumer product such as Ellie. But for applications like water sterilization in third-world countries, the industry needs much longer product lifetime.

Editor’s note:Learn more about the applications of UV LEDs in healthcare and consumer health during Strategies in Light 2017 with RayVio CEO Robert Walker. View the presentation details and register for the conference.