The US Department of Energy's (DOE’s) latest Caliper report focuses on the bare-lamp performance of 31 linear LED lamps as measured against T8 fluorescent tubes. 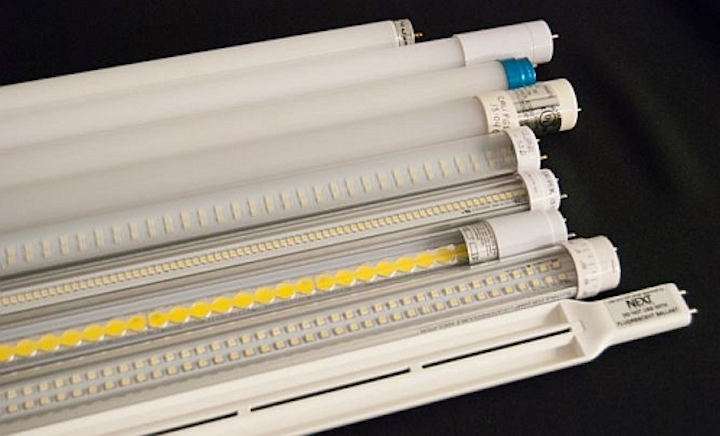 The US Department of Energy's (DOE’s) latest Caliper report focuses on the bare-lamp performance of 31 linear LED lamps as measured against T8 fluorescent tubes. DOE testing found these LED lamps to exhibit improved performance relative to previous Caliper tests. Some of the latest LED lamps performed comparably to fluorescents in terms of efficacy, color quality, and power quality. However, none of the LED products could match the luminous intensity distribution (omnidirectionality) and only a handful provided comparable lumen output.

One year ago, the DOE reported on an extensive evaluation of linear LED products versus fluorescent troffers in its Caliper Exploratory Study (http://apps1.eere.energy.gov/buildings/publications/pdfs/ssl/caliper_recessed-troffer_2013.pdf). At that time, that study compared 12 LED troffers, 4 LED retrofit kits, and 5 LED tubes to 3 fluorescent benchmark products. Almost all the LED products performed better than fluorescent fixtures in terms of efficacy. In this test, a few of the lamps exceeded 90 lm/W but none of the lamps had a CRI above 77 and no lamp emitted more than 2000 lm. The study concluded that dedicated LED troffers were ready to compete with fluorescent troffers in terms of efficacy and in many lighting quality issues such as glare, light distribution, visual appearance, and color quality. However, it noted that color quality issues remained with LED retrofit kits and some LED tubes. 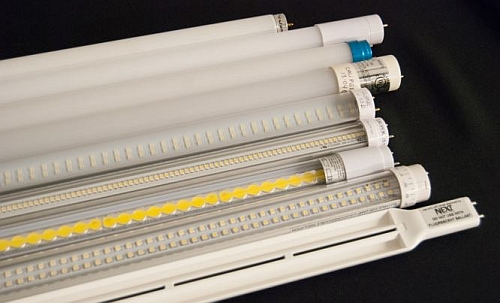 Sampling of the T8 LED lamps used in this Caliper study, illustrating the range of product designs.

In 2010, the DOE estimated there were nearly one billion installed fluorescent luminaires, 60% of which were T8s. The potential energy savings associated with converting this capacity, though not necessarily to T8 LEDs, was 1000 tBTU, the equivalent of the electricity consumed by 27 million US homes in a year.

According to ANSI C78.81-2010, a fluorescent T8 must have a diameter between 0.94 and 1.1 in. and a length between 47.67 and 47.78 in. Though most LED T8s use the bi-pin connectors, they are typically powered from mains voltage and therefore require an integral driver and cannot operate directly from the existing ballast. There are many T12 (12/8 in. or 1.5 in.) fluorescents still in existence, and most linear LED T8s have the potential to replace these T12s due to the large fixture area surrounding the tubes.

The latest Caliper report on T8s discusses various electrical configurations including socket types and power feed locations. The study notes that the variety of configurations makes specifying and installing LED lamps more difficult while also introducing potential safety hazards. This is consistent with the 2013 study, which indicated a lack of labeling on retrofit kits, which made installation more challenging for electrical contractors.

The LED lamps in the current study were purchased in late 2012 or the first half of 2013. Testing was performed in accordance with IES LM-79-08 using both an integrated sphere and goniometer. All LED lamps had directional or semidirectional light distributions.

Relative to the Exploratory Study, the 31 LED lamps in the April 2014 study had an average efficacy at 94 lm/W (one product at 143 lm/W); 16 of the lamps had a CRI exceeding 80; and one lamp approached the lumen output of a 32W fluorescent T8 at 3126 lm. Only 8 lamps simultaneously met the DLC QPL requirements for efficacy and output. Most products produced approximately half of the target output and five products produced as much lumen output as a ballasted 28W T8 fluorescent.

The light distribution from the linear LEDs was largely determined by whether a diffuse lens was used over the lamp or now. Diffuse lenses tend to spread the light better over a 90° angle or larger, whereas the clear lenses led to a more directional light distribution.

Half of the 31 LED lamps had a CRI below 80 and the other half exceeded 80, with one lamp reaching CRI of 90. A color temperature in the range of 4000K was desired, but not all manufacturers offer this product so 4 lamps had CCTs above 5000K. 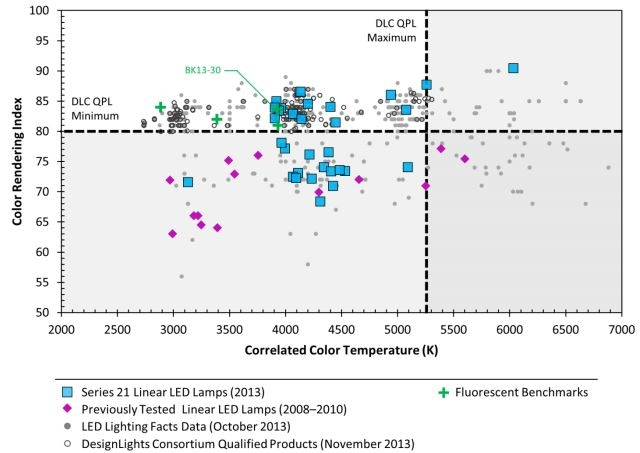 Fourteen of the 31 LED lamps met the DLC QLC criteria for CCT and CRI.

In terms of energy savings, 22 of the 31 LED lamps tested drew less than 20W, providing a 38% savings relative to a 32W T8. Some LED lamps provided little or no energy savings. Most (84%) of the LED lamps featured a power factor above 0.90.

The LED T8s did not meet ANSI specifications in terms of size (most exceeding the 1.1-in. diameter, some as large as 1.4 in.); however, this variation is not likely to cause a problem. The study determined that many of the manufacturers’ claims were accurate, but 45% of products had a measured value for lumen output, input power, or efficacy that differed by more than 10% from the claimed performance. Many manufacturers also did not accurately report beam angle for their lamps, which could cause issues upon installation.

In summary, the performance of T8 LED lamps has improved significantly over the last year but manufacturers still need to improve the lumen output in order to compete directly with 32W T8 fluorescent tubes. In terms of color temperature, CRI, efficiency, and power factor, many of the LED lamps compete well with the fluorescent benchmarks. Since the limitations of light distribution can only fully be measured in a troffer, further studies are needed to determine the suitability of many of the linear LED lamps for use in offices, classrooms, or other applications.

Upcoming reports in the Caliper T8 Series will discuss: The performance of the thirty-one T8 lamps in a standard troffer with a K12 (prismatic) lens -- comparing luminaire efficacy and luminous intensity distribution (Report 21.1); the performance of three T8 LED lamps in five types of recessed troffers -- comparing luminous intensity distributions (Report 21.2); and the analysis of the lifecycle cost of LED T8s relative to that of fluorescent T8 tubes (Report 21.3).