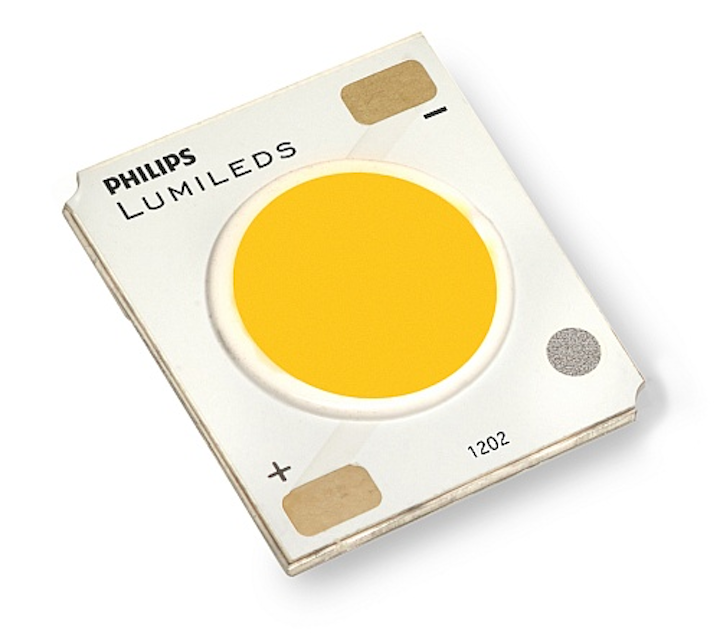 Philips Lumileds has announced the Luxeon CoB 1202 LED array family that delivers efficacy over the range of 95-130 lm/W. The new chip-on-board (COB) LEDs are designed specifically for directional applications including integral spotlights and replacement lamps such as PAR38s where the key application requirement is high center beam candle power (CBCP). 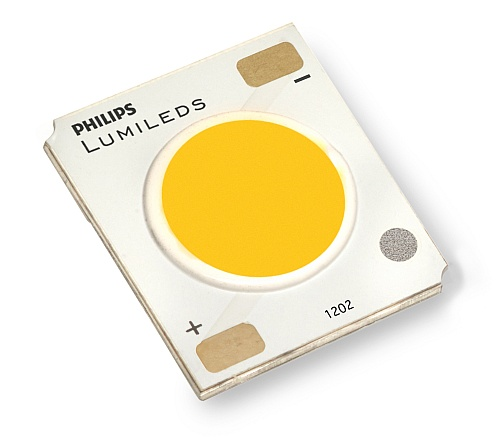 The 1202 LED family joins the previously introduced 1203 with a 9-mm light emitting surface (LES). The 1202 is in the exact same footprint as the 1203, enabling product developers to cover a range of lumen output requirements with one lamp or luminaire design. The 1202 tops out at around 1450 lm whereas the 1203 extends beyond the 2000-lm level.

But Lumileds said that the performance of the 1202 LED family is a match for applications such as PAR38 lamps. "The high efficacy, combined with our lineup of compatible reflectors and drivers, enables the most affordable PAR38 and spotlight designs to date," said Eric Senders, product line director at Philips Lumileds.

With the 1202 announcement, Lumileds staked out a value proposition reminiscent of recent Cree announcements that tout what Cree calls better optical control factor. The basic concept is that more lumens from a smaller LES enable better control of the beam. Lumileds said that a 30% reduction in LES could lead to a two times increase in CBCP.

The 1202 will be suitable for use in lamps for replacing 75W PAR30/38 and 90W PAR38 legacy lamps. The 1203 LEDs fit in similar products with both LED families capable of delivering the necessary 1200-1440 lm. But the 1202 will support lower-cost designs while the 1203 will enable higher-efficacy lamps. Still, Lumileds says that the 1202 LEDs will enable PAR lamps that meet Energy Star requirements, including tight beam control with no shadows.

Lumileds will offer the new COB LEDs over the range of 2700-5700K CCT. CRI options will go to 90 at the warmer end of the CCT range and Lumileds will offer a 70-CRI option at the cooler end. The 90-CRI warm-white versions will also offer R9 performance above 80 for demanding applications such as retail. A 3000K, 80-CRI LED driven at 200 mA will output 800 lm and the LEDs will allow for double that drive current to reach the maximum flux levels.