The new SSL bulb design uses an air-flow-based cooling scheme that allows convective flow from the base to the top of the domes and more-closely mirrors the look of conventional incandescent lamps. 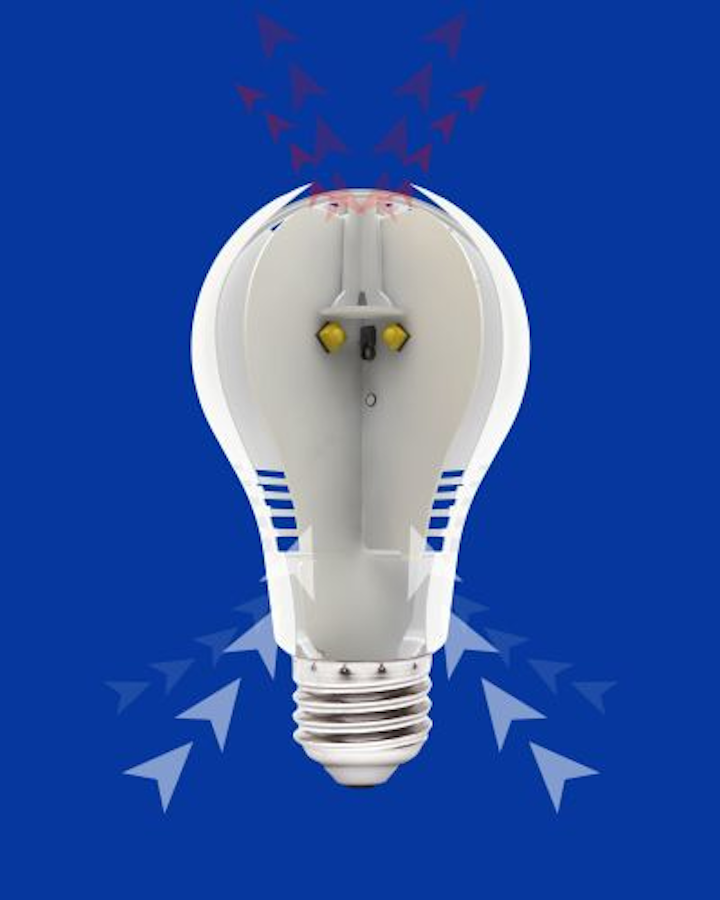 The new SSL bulb design uses an air-flow-based cooling scheme that allows convective flow from the base to the top of the domes and more-closely mirrors the look of conventional incandescent lamps.

Cree has revealed its second-generation commercial LED bulb/lamp design with products designed to replace 40W and 60W incandescent bulbs. The new design is lower in cost with 40W-equivalent products selling for $7.97 at Home Depot, and the cost reductions are derived from an air-flow-based thermal design that enables the use of fewer LEDs driven at higher current and lower-cost thermal elements. The result is a replacement LED A-lamp that is mostly indistinguishable from an incandescent bulb. 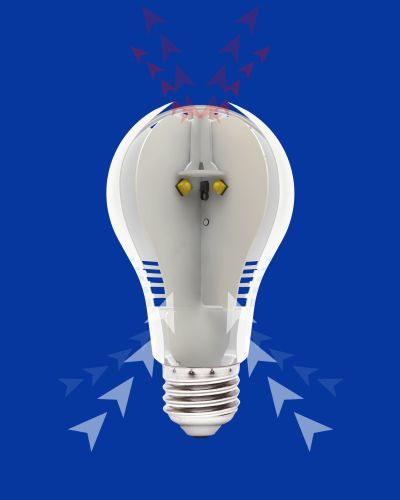 Cree has consistently been among the technology and market leaders since it entered the market with 40W- and 60W-equivalent LED lamps back in March 2013. The company followed those products with both 75W- and 100W-equivalent A-lamps, A-lamps with high CRI, and BR30 lamps. All shared a similar internal design based on what Cree called a filament tower.

The new design is a complete departure. Cree has said the new design looks more conventional, but the real reason for the design is lower cost and perhaps even better optical performance, although the prior lamps have remained among the most highly rated on the market.

The original design had a notable metal heat sink painted white. That feature certainly provided a different look from incandescent bulbs, but it was not nearly so obtrusive as the silver metal heat sinks with fins used on many low-cost LED bulbs.

Already the mainstream media has reported that the new Cree design has no heat sink. We haven't had the chance to get a hands-on look at the product just yet (stay tuned), but we suspect that the new design has thermal elements and likely uses thermoplastics to minimize the look of the elements and minimize weight as well. Indeed, based on the specs, the new Cree lamps comes close to the weight of an incandescent bulb at around 2 oz.

Based on the cutaway photo that Cree supplied, the new design uses far fewer LEDs than did the filament tower. The LED lamp appears to be segmented into four sections, with the sectors being pie-like if vewed from the top of the bulb. Note that Philips and Best Buy have previously used segmented approaches, although ones quite different from Cree. But Philips has notably retreated from that approach in its mainstream lamps.

You can see two LEDs in the nearby photo and that would equate to eight total in the lamp. The orginal design used 20 LEDs. The reduction is clearly enabled by improvements in LED technology. But it's likely that Cree is able to drive the LEDs harder with the new thermal design while maintaining suitable life. The lamps are rated for 25,000 hours of use and carry a three-year warranty.

Cree refers to the new design as 4Flow Filament Design. The LEDs are still mounted on a central vertical structure or tower as in the original design. But rather than depending on a metal tower to conduct heat to the base, the new design has slits at the base and top of the bulb to allow air-flow across the LEDs and thermal surfaces to which they are mounted.

The new lamps offer 460- and 815-lm output in the 40W and 60W equivalents, respectively. As in the past Cree will offer the lamps in a warm 2700K CCT and in a daylight version at 5000K. The brighter version uses 11W. CRI is 80 or better. The product is slightly larger than an A-19 bulb, but would fit in most applications.