Targeting applications such as SSL retrofit lamps and downlights, the Luxeon 3535 HV LEDs include models powered at 24V and 48V that enable simpler driver designs and better system efficiency. 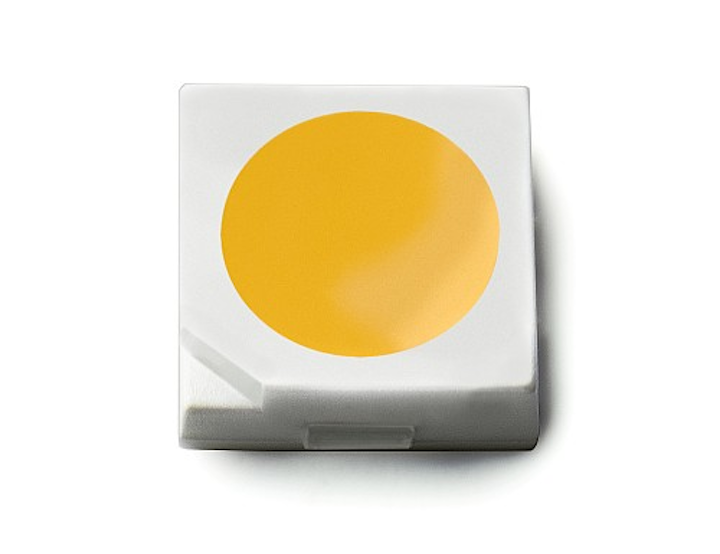 Philips Lumileds has announced the Luxeon 3535 HV LED family that, as the model suffix implies, operate from higher voltages -- 24V and 48V versions are available. The higher forward voltage simplifies driver design because the voltage drop from the AC line power is less than in typical low-voltage LEDs, and the lesser difference can result in better efficacy.

With the new LEDs, Lumileds is targeting what it terms space-constrained, solid-state lighting (SSL) applications including retrofit lamps, downlights, and wall-mounted luminaires including sconces. Lumileds product manager Michael Howley said, "We're finding that manufacturers of wall packs, wall sconces, and pendants in many different regions of the world are interested in high-voltage LED technology and the design simplicity it affords."

The advantages of a high forward voltage are manifested directly in driver component count, according to Lumileds. "The advantage of designing in high-voltage LEDs is that they utilize drivers containing on average less than 20 components, relative to standard LED drivers that can contain up to 50 components," said Howley. "As a result, the total BOM cost can be reduced and the amount of inventory they need to carry to design the driver is minimized."

The new mid-power LEDs do trail the latest high-power LEDs in terms of efficacy. At a 4000K CCT, efficacy tops out at 125 lm/W for the 24V model when driven at 20 mA and characterized at a 25°C junction temperature. Those conditions yield an output of 120 lm, and the LEDs deliver CRI of 80 across the board.

Lumileds only entered the mid-power LED space targeting general lighting applications last year. The company announced the 3535 2D family, for instance, last May. The company now intends to broaden its position in what it considers a fast-growing segment. Indeed, in an interview last October, CEO Pierre Yves Lesaicherre foreshadowed a broader mid-power family on the way.

Since entering the mid-power market, however, Lumileds has insisted that it would apply technology gleaned from its high-power LEDs to the lower-cost products. The company has yet to reveal details of how the new LEDs are packaged or constructed. But Rahul Bammi, vice president of marketing at Lumileds, said, "Lumileds' intended goal is identical reliability for mid-power and high-power LEDS."

Lumileds said that it is providing LM-80 lumen maintenance data for its mid-power LEDs that would provide backing for long-life claims. Moreover, the company said that the new LEDs are being offered with a choice of 3- or 5-step MacAdam ellipse color bins -- color uniformity common to discrete high-power LEDs.