The Acculamp family now includes a 25W 2000-lm PAR38 lamp powered by a pair of COB LEDs, and also smaller SSL products in the MR16 family including a 400-lm lamp. 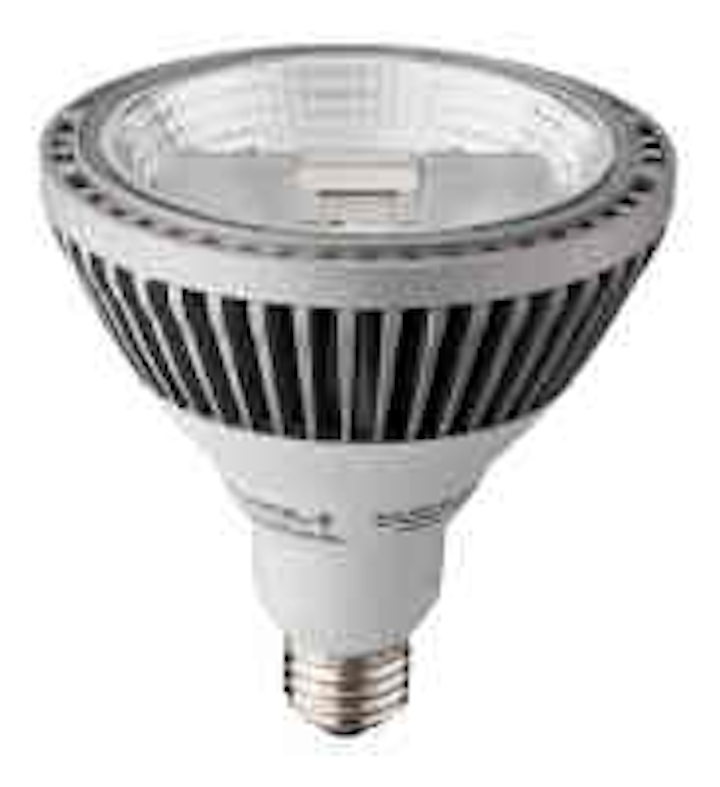 Acuity Brands has expanded its Acculamp family of LED replacement lamps with 25W 2000-lm PAR38 lamps that are capable of replacing 150W halogen lamps. The company also added 400-lm MR16 lamps to the specification-grade solid-state lighting (SSL) line that is intended for the professional market.

Acuity has implied that the new lamps have established a new milestone for flux output in PAR38 lamps, although the company stopped short of saying the Acculamp was the first such product announced. But a quick web search didn't reveal other readily available products at that performance level.

"We listened to the marketplace and identified a significant demand for high-lumen-output LED lamps that would meet the requirements of demanding applications," said Seth Owen, Acuity Brands Lighting vice president for LED lamps and track lighting. "Through the combination of a high lumen package, crisp beam angles, and low glare, the 2000-lm PAR38 is our solution."

The lamp developers achieved the high output using a pair of chip-on-board (COB) LEDs. Essentially, the design splits the reflecting chamber in half with a thin light engine that is readily evident bisecting the chamber. The COB LEDs are mounted back to back with what Acuity calls a thermal conductive highway between them to transfer heat away from the LEDs. Each LED emits light outward to the reflector that forms the specified beam pattern.

The lamp architecture delivers system efficacy in the 80 lm/W range including the integral driver electronics. Acuity rates the lamps for 25,000 hours but said it projects an actual life of 50,000 hours. The lamps are backed by a five-year warranty.

All of the new lamps have gone through the initial stages of Energy Star qualification. They are dimmable to 10% and Acuity expects the lamps to receive Energy Star certification.