The small-footprint LED family offers a 110° beam and will serve in portable, directional, architectural, and vehicle applications with white and red, green, and blue LEDs available. 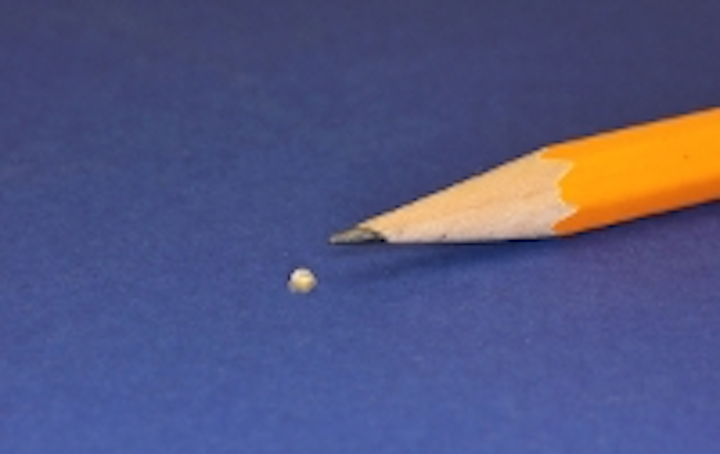 Cree has announced another small-footprint LED in its XLamp family of ceramic-packaged products designed for general lighting applications. The 1.6×1.6-mm XQ-E family comes in a package that is geometrically consistent with products such as the XT-E/E2 LEDs, delivers a 110° viewing angle, and is offered in white, red, green, and blue versions enabling a broad set of target applications.

Paul Scheidt, Cree product marketing manager, said that the new XQ-E LED offers nearly double the lumen density compared to the XP-G2 that had previously been Cree's top-performing LED measured in lm/mm2. The new LED die is carved from the same wafer as the XP-E2 LED family that is based on Cree's SC3 (pronounced SC cubed) manufacturing platform.

Cree's generational labeling is beginning to get a bit confusing because we have pointed to SC3 as referring to third-generation silicon carbide, although Cree has now said that was never the intent with the cubed designation. In any case, the XQ-E is what Cree refers to as a second generation of SC3 products.

In any case, the small LED has already resonated with at least one customer. "We're excited about the new possibilities for smaller, lighter, or brighter designs enabled by the new XQ-E LED," said Luke Thorkildsen, director of lighting division for The Coleman Company. Presumably Coleman's interest will be for portable applications such as lanterns.

"No other LED manufacturer offers an LED of this small size with such a high level of performance," said Thorkildsen. "Cree's new XQ-E LEDs are changing the way we view LEDs."

The white versions of the XQ-E come in 2700K to 5000K CCTs with 80 CRI available in all but the coldest version and 70 CRI offered across the product line. At 1A of drive current and 3W of power the LEDs deliver 287 lm.

Scheidt also pointed out some subtle differences of the XQ-E product line including the fact that the die, optics, and package are symmetrical with a shared optical and mechanical center, and that the white and color LEDs are identical in dimensions and shape. He said small-footprint LEDs from competitors are often asymmetrical with size variation between colors and that the shape impacts things from the light patterns generated by a group of LEDs to simplicity of assembly using pick-and-place equipment.

The applications for the LEDs are broad, according to Scheidt. For example, he said, "With building facades you don't have much room for luminaires." With the XQ-E family, luminaire makers can deliver more compact RGB products.

Even in applications such as a light engine for a directional lamp or luminaire, the size could come into play. Scheidt showed an example of a light engine with nine XP-G2 LEDs in an array. To achieve the same flux output you would need 18 XQ-E LEDs. But those 18 LEDs would fit in 50% of the footprint of the XP-G2 LEDs.

Are we pushing complex SSL solutions too quickly?

Could simplified lighting offerings promote “tunable SSL for all” within the consumer base comfort zone?
Carrie Meadows
Jun 28th, 2019