Remote-phosphor technology for LED lighting applications is a hotbed of innovation, with companies such as Intematix and Cree leading the way, as LILY LI explains. 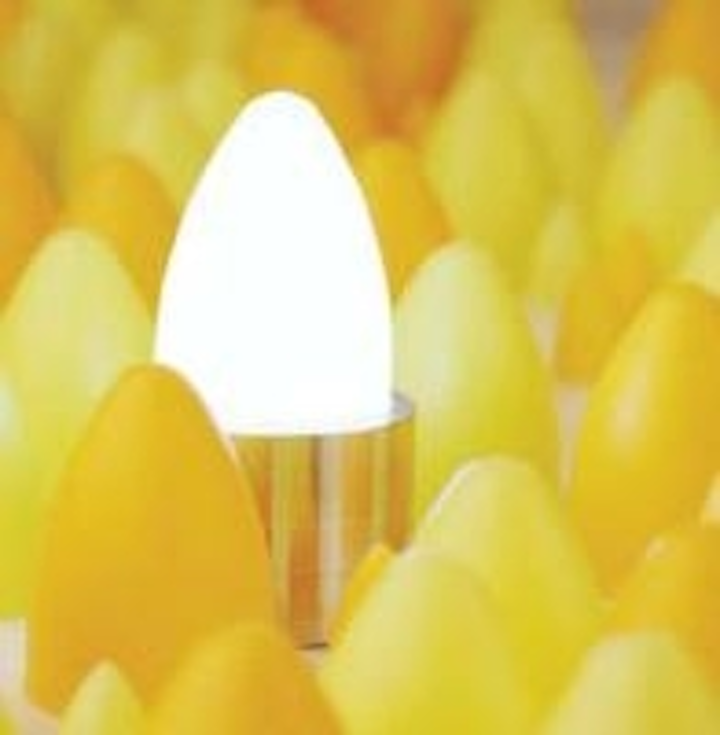 In April 2012, Intematix unveiled its new ChromaLit XT remote-phosphor lighting solution. This optic design integrates innovative remote-phosphor technology to produce a material that can withstand temperatures of up to 270°C, and can increase LED system efficiency by up to 30%.

The importance of Intematix’s new product and other remote-phosphor innovations cannot be ignored. After all, remote phosphor addresses a fundamental pain point in the solid-state lighting industry and the one main barrier to widespread adoption of LEDs: cost, cost, cost. But intellectual property concerns cloud the picture for remote-phosphor usage.

Though LED lights cost less than incandescent bulbs and CFLs in the long run, due to energy savings and bulb longevity, consumers still view light bulbs as consumer perishables – more akin to disposable toothpaste tubes and toilet-paper rolls than durable products like furniture and door frames. The $55 sticker price on a high-quality LED lamp still shocks most consumers, when the alternative is a $2-3 incandescent bulb (with a nice warm light). As a result, LED producers need to drive costs down to parity with conventional bulbs in order to overtake the lighting market.

Even the most optimistic forecasts of the LED industry demand dramatic improvements in LED efficiency and price. A US Department of Energy (DOE) report published in January 2012 predicted that LEDs will occupy up to 73.7% of all lighting applications in the United States by 2030, and consequently drive down the energy costs of lighting by 46%. These DOE estimates, however, require a more than 100% increase in LED efficacy (measured by lumens per watt), a 50-200% increase in bulb longevity, and an 18-fold decrease in price over the same time span.

Generally, to produce the broad-spectrum white light that we love, LED manufacturers use one of two different methods: mixing differently colored LEDs, or depositing a yellow phosphor layer on a royal-blue LED die to convert the wavelength of the light. Unfortunately, these processes are highly inefficient. Mixing multiple LED colors requires costly inventory processes. Depositing a phosphor layer for each LED die causes inconsistency in LED color temperature (CCT) and color rendering (CRI), as a phosphor layer will degrade over time due to the heat of the LED die.

Given the potential size of the LED lighting market, and the revolutionary nature of remote phosphors to the industry, a battle already rages on for ownership of the fundamental technology behind remote phosphors. Our analysis will focus on two of the biggest players in the field: Cree and Intematix.

Philips also has a strong portfolio in remote phosphors and engages in market competition with Cree and Intematix (Fig. 2). However, Philips already has access to Cree’s remote-phosphor patents through a cross-license agreement in 2010, and so will not be the focus of our analysis.

Cree is a multinational LED lighting company based in Durham, North Carolina. Over the past three years, Cree has maintained a dominant position in phosphor innovations across all top LED manufacturers (Fig. 2). For remote phosphors specifically, Cree has 42 patent applications across Europe, Japan, and the United States, and 13 international patent applications (Fig. 3). Most importantly, Cree has 10 issued patents in the United States, but so far none abroad.

Just this past fall, Cree launched a licensing program for its remote-phosphor technology, a move that positions the company as both an advocate of remote-phosphor technology and an enforcer of its IP ownership rights. George Brandes, Cree’s director of intellectual property licensing, said: “If you want to make a white light with a blue LED and a phosphor, you probably want to have access to Cree patents... we feel that they are fundamental to making a remote-phosphor luminaire.” So far, Aurora Energie, Horner, Ledzworld Technology, Vexica Technology, and Wyndsor Lighting have signed up for Cree’s licensing program.

Cree has yet to publicize the list of fundamental patents in its remote-phosphor licensing program. We can infer the list, however, by analyzing Cree’s patent portfolio for remote-phosphor technology (see Table 1 in the full-length version of this article on our website. The process involves de-duplicating patent family members (i.e. ignoring additional patent filings based on the same core invention), but including all issued patents.

Cree’s first issued patent in the remote-phosphor space (US 6,3500,41 B1 entitled “High output radial dispersing lamp using a solid state light source”) is cited by 167 patents, including a patent by Intematix. The high number of citations suggests that other experts in the field consider this patent to represent fundamental technology in the space. The early priority date (December 1999) of US 6,350,041 in relation to the rest of Cree’s portfolio also suggests the importance of this innovation, as patents with an earlier priority date can serve as prior art to subsequent patents and affect their validity.

Intematix is developing its own patent rights, and from what we can tell, is also launching a full market campaign to advocate its own remote-phosphor technology. So far, Intematix has met with success, and the company’s ChromaLit remote-phosphor line and other phosphor innovations have caught the eye of investors. Just this past March, Intematix received $16.2 million in funding.

Intematix’s 2012 ChromaLit brochure mentions that the Intematix remote-phosphor portfolio is 56 patents strong, suggesting that the company has filed more patents within the last 18 months that are yet to be published.

Fig. 5 compares the patent filing velocities for Cree and Intematix in the remote-phosphor space. Cree’s licensing program could pose a problem for Intematix, as the priority date of Intematix’s first issued remote-phosphor patent is March 2006, seven years after Cree’s 6,350,041 patent. The Intematix website suggests, however, that remote phosphor has a long history that predates even Cree’s patents, evolving from remote phosphor developed for use in the auto industry in the 1980s. The implication is that Cree’s (and Intematix’s) remote-phosphor patents merely build upon existing technology, and do not (and should not) preclude future technical improvements. In fact, one of Intematix’s issued patents (US 7,915,627 B2, entitled “Light emitting device with phosphor wavelength conversion”), cites Cree’s 6,350,041 patent and discusses the innovation within the patent text (Fig. 6). The 6,350,041 reference came before Intematix’s patent examiner multiple times, and yet the examiner did not use Cree’s patent to block any of the claims in Intematix’s patents. Though not the final word on the subject, this shows that Intematix’s innovation was enough of an improvement on Cree’s intellectual property to warrant patent protection.

Light at the end of the tunnel

Both Intematix and Cree have strong positions in the remote-phosphor space. Cree has a larger patent portfolio than Intematix and earlier priority dates for some of its key patents, but the IP system will still protect Intematix’s technological improvements as long as they are novel and non-obvious.

Though the lawyers and courts may ultimately have to decide ownership of remote-phosphor technologies, this will not stop innovation. Cree and Intematix still have plenty of room to develop their next new products, increase LED efficiency and longevity, and decrease LED prices for broad market adoption.

Regardless of how the patent battles play out, the competition between Intematix and Cree is a boon for the LED industry as a whole. In the on-going fight for technological dominance, LED companies will have the incentive to innovate and winnow down costs far enough to establish a deeper presence in markets that still have enormous growth potential.