Sunovia has supplied EvoLucia luminaires in Sarasota SSL bridge project, while Cooper has lit the Detroit Windsor Tunnel, and Lumenpulse has provided programmable RGB lighting for an iconic plaza. 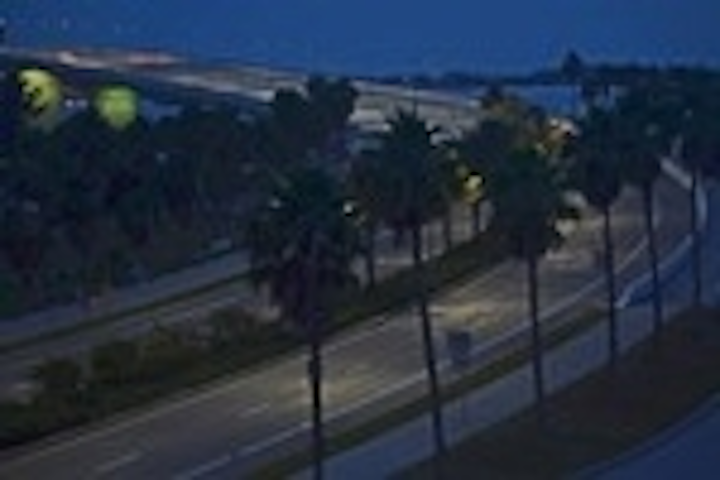 Sunovia Energy Technologies has supplied its EvoLucia LED lights to the city of Sarasota, Florida to light the local Ringling Bridge. Cooper Lighting is supplying solid-state-lighting (SSL) fixtures to Motor City Electric to install in the Detroit Windsor Tunnel linking the US and Canadian cities. Lumenpulse has combined efficient LED lighting and wind power in a Chicago shopping-plaza project. Hawaii and central-California cities contemplate LED-lighting projects.

In Sarasota, the city hopes that LED lighting will reduce energy consumption by 70% while increasing nighttime visibility on the Ringling Bridge. The city contracted with Siemens to replace 185W high-pressure-sodium (HPS) lamps with 55W Sunovia LED luminaires.

A local official noted environmental and local-economic benefits of the project. "Innovative endeavors such as the Ringling Bridge Project and the forward-thinking approaches of our citizens have helped Sarasota to continue to be seen as one of the most progressive and environmentally friendly cities in the country," said Mayor Suzanne Atwell. "In addition, these lights have been designed and manufactured by a local company, Sunovia Energy, whose employees live and work right here in our community. We are proud to be helping to create and retain sustainable, high-tech jobs in our community."

The Sunovia fixtures use the company's Aimed Optics to control the beam pattern and ensure that the light is properly focused on the target area. Commenting on the safety benefits that come in addition to energy savings, Sunovia co-founder Craig Hall said, "The LED lights also increase safety and security by improving light uniformity on the road, which enhances visibility."

In the Cooper project, the tunnel operator, American Roads and Detroit Windsor Tunnel LLC, hopes to save $1.18 million in energy costs over a ten year period. The installed metal-halide (MH) lights have cost the operator $160,000 per year in energy cost and projections indicate a reduction to $45,000 with the LED lights.

The magnitude of the saving in the tunnel are due both to the general efficiency of LED lighting and the fact that the installer Motor City Electric is utilizing fewer LED fixtures in the project due for completion this month. Excepting areas such as portals and entrances to the tunnel, the Cooper fixtures are being placed at 20-foot intervals whereas the MH lights were at 40-foot intervals.

The reduction in fixture density was enabled by the superior uniformity of the LED lights – Cooper's McGraw-Edison Valet fixtures – and by the operational parameters of the different light sources. In part the lengthy warm-up and cool-down periods of the MH lights impacted the spacing whereas LEDs inherently provide instant-on lighting.

In Chicago, Illinois, the Cermak Shopping Plaza now features a programmable canopy of LED lighting that was created by Ethos Workshop, Architects and Planners using RGB Lumenpulse fixtures. The plaza has a storied past with appearances in Hollywood movies and past contemporary art displays hosted by plaza founder and art patron David Bermant.

Recently the plaza had suffered from both age and tenant attrition and the lighting retrofit was conceived as a way to restore past glory. About the project, Ethos president Scott Allman said, "It has been a great success. It's brought the property to life." Occupancy has improved from a low of 40% to 98% leased.

The impressive lighting is enabled by the RGB capabilities of LEDs, the inherent efficiency in SSL, and a renewable-energy element. Wind turbines installed along the edges of the plaza parking lot are projected to generate 2500 kWh of electricity a year – ultimately more power than required for the lights allowing the plaza to profit from power directed back to the grid.

In other SSL projects, two California Central Valley cities are undertaking SSL street-light projects according to the Central Valley Business Times. The city of Ceres will replace 2200 HPS lights with LED luminaires aiming to save $108,500 in energy costs annually. The city of Kerman will replace 718 HPS and MH lights with LEDs. Both projects are being funded in part by loans from the California Energy Commission.

Maui, Hawaii is considering an SSL project that could save the county $1 million annually according to The Maui News. The county is seeking an LED-street-light solution that will not impact local astronomers or wildlife and the county has concerns about dark-sky impact caused by the color temperature of many LED street lights.