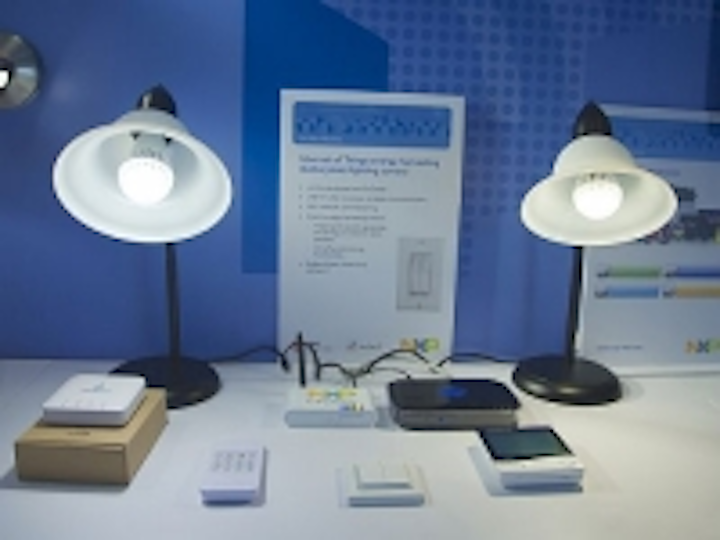 The demonstration relied on an energy-harvesting switch from EnOcean. We've covered that technology before. For example, it was used as the wireless control technology in the modular solid-state lighting (SSL) installation in a Paramount Pictures conference room.

In addition over on our Illumination in Focus website, we covered Illumra products in our report on the exhibits at The LED Show 2013, at which the company demonstrated products based on the EnOcean technology that is formally promulgated by the EnOcean Alliance.

The switches work by harvesting the energy generated when a person presses a switch to temporarily power a microcontroller that then sends a message to the LED lamps. A quick push toggles the on/off state of the lamp. If you depress and hold the switch, the lamps will dim or brighten until you release the switch.

The advantage of the wireless technology is the lack of any need to install new wiring along with the fact that no power or battery is required at the switch. In past demonstrations by Illumra, EnOcean, and others, however, the wireless link between a switch and a lamp was unsecured. Any switch could control any lamp within wireless range.

In the CES demonstration, NXP implemented a security key that ties together specific switches and lamps. The key can be stored in the lamps in the microcontroller's memory. But the switch with no power presents a problem for commissioning. NXP uses NFC technology that's implemented in some smartphones and tablets to store the key in the switch. When the switch is tapped against the mobile device, the NFC message can be transmitted to a tag in the switch in the same manner that passive radio frequency identification (RFID) tags are written.

NXP developed the lamps in the demonstration based on its JN5161 wireless-enabled microcontroller that provides ZigBee wireless compatibility. The demonstration also relied on a gateway that bridges Wi-Fi or Ethernet to the ZigBee network that the lamps connect to. That bridge allows lamp control by PCs or mobile devices in addition to control by the switch. On its wireless microcontrollers, NXP supports ZigBee Light Link, ZigBee Home Automation, and its own proprietary JenNet-IP protocols. JenNet-IP is based on the 6LoWPAN (IPv6 over Low power Wireless Personal Area Network) standard and we covered that technology in a feature on network standards.

"Wireless smart light bulbs are now available from major retailers in the US," said Thomas Lorbach, marketing manager for RF connectivity solutions at NXP Semiconductors. "The challenge now is to ensure that setting up and expanding a wireless smart lighting network is as painless as possible for the everyday home user. NFC provides a quick, secure and easy way to add new devices to home networks and to the broader Internet of Things. We’re excited to be working with EnOcean and other partners in fine-tuning the overall user experience — and ultimately helping consumers to control their lighting and energy use more effectively."