LightingEurope recently published the "Quantified benefits of human centric lighting" study, and Caroline Hayes examines the findings and explores the state of HCL, especially for manufacturers operating in the European market. 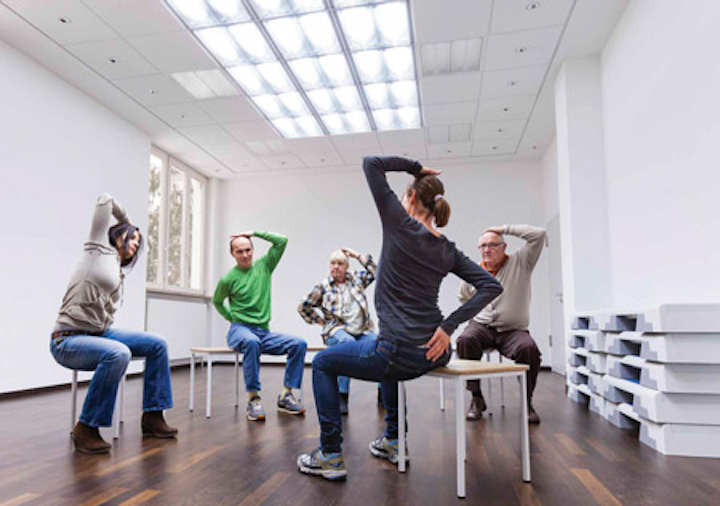 LightingEurope recently published the "Quantified benefits of human centric lighting" study, and CAROLINE HAYES examines the findings and explores the state of HCL, especially for manufacturers operating in the European market.

What is human-centric lighting (HCL)? For some it is common sense - what your mother used to tell you about good lighting not hurting your eyes. For others HCL is a new philosophy, with new rules, requiring novel business models and opening up opportunities never seen before. A recently published European study called "Quantified benefits of human centric lighting" attempts to gauge the market opportunity and the impact that HCL will have on society.

The relationship between light and levels of wellbeing was expounded when a third photoreceptor, in addition to rods and cones, was identified in the human eye in 2001. With that discovery, the effects on circadian rhythms - i.e., mental, physical, and biological changes - could be correlated to specific light conditions (note that the medical community is still working to fully understand the non-visual receptors as we covered in an LEDs Magazine article last year). The discovery created two distinct purposes for HCL: biologically effective lighting to improve cognitive performance, and emotionally effective lighting to create stimulating environments. We will cover both types of benefits, but to set the stage consider that high-CCT lighting has been linked to increased alertness among students in schools (Fig. 1).

According to its foreword, the new research published by LightingEurope, AT Kearney, and the German Electrical and Electronic Manufacturers' Association (ZVEI) is the first to quantify the benefits of HCL. The research examines the benefits at a micro level, i.e., for individual investors such as facility owners, and at the macro level, i.e., from the perspective of the general public. The idea that HCL could yield opportunity and societal benefits is not altogether new. Mark Rea, director of the Lighting Research Center (LRC) at Rensselaer Polytechnic Institute, among others, has championed monetizing HCL.

Diederik de Stoppelaar, general secretary of LightingEurope, explained that the study looks at the non-visual aspects of lighting - the productivity, medical, and education benefits. "Human-centric lighting adds value because of the additional applications created for lighting, such as treating diseases or skin conditions, with light; the improvement of productivity and concentration," he said, "as well as sleeping problems, where light color temperature can provide a better night's rest. These are all positive applications." 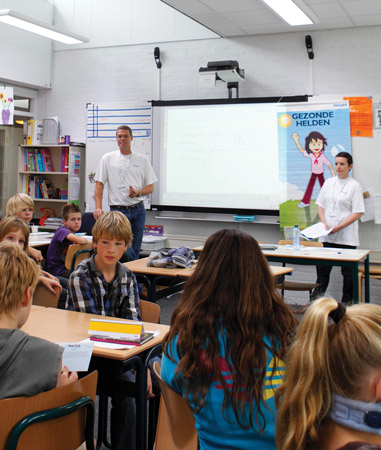 While the study shows that the industrial segment will see the most significant, quantified benefits, attributed to productivity increases, it notes that the medical and elderly care segments will see fewer benefits at the micro level. Here, potential benefits are quantified in savings realized by insurance companies and other stakeholders, rather than the medical and care provider. The study speculates that total benefits for Europe, measured as increased GDP (gross domestic product), could be €0.87 billion (approximately $0.97B), or up to €12.8B (approximately $14.25B) if market penetration were to reach 100% by 2020.

For de Stoppelaar, the European Union's decision to follow LightingEurope's recommendation to delay the ban on replacing incandescent bulbs with LEDs in halogen lamps allows the industry to develop the right quality of lighting at an acceptable price point in readiness for HCL. For him, LEDs are the driving force.

LEDs enable control, with varying intensity and colors as well as increased levels where needed. Digital lighting also allows connectivity. Used with a sensor network, light levels can be increased or decreased by sensor or remote control for ease as well as comfort. Philips Lighting, for example, has developed an infographic that both shows the combination of sensors and controls and touts the benefits of adaptive controls in a variety of solid-state lighting (SSL) applications (Fig. 2).

"With controllable digital light, we can now more easily vary intensity, spectrum, and color," observed Luc Schlangen, senior principal scientist, Philips Research. "Human-centric lighting is about being able to personalize and control your lighting to suit your needs and increase your wellbeing." The importance of the control afforded by LEDs is key for Schlangen.

There are many examples of lighting being regulated by smartphones, such as Philips Lighting's Connected Lighting, where Power over Ethernet (PoE) connects office lighting fixtures to the building's IT network. Employees can control and access building services using smartphones to light areas where and when needed.

There are cost efficiencies, too. According to Schlangen, connected lighting solutions for offices that use PoE to power built-in LED ceiling lighting "can save up to 80% in electricity consumption, while at the same time providing personalized lighting for employees, who can control each light with a swipe of a finger on the smart device. Connected lighting is the future," he stated.

Benefits of HCL are difficult to quantify; unlike energy efficiency, there are no direct savings comparisons. The "Quantified" study looks at segments and has made assumptions on behavior changes and assessed their benefits in terms of productivity, sickness days, and staff retention, contributing to a business's GDP.

For example, in industrial settings the study looked at a factory of 750 workers performing repetitive tasks. Typical LED-based factory lighting was replaced with 2000-lx LED lighting. It was found that while annual electricity costs rose from €42,000 (approximately $47,000) to €54,000 (approximately $60,000) for HCL, the effect was that productivity increased by 4.5%. The study also reports fewer accidents (1%) due to increased alertness, together with 1% fewer sick days, and one-year improved retention of staff. 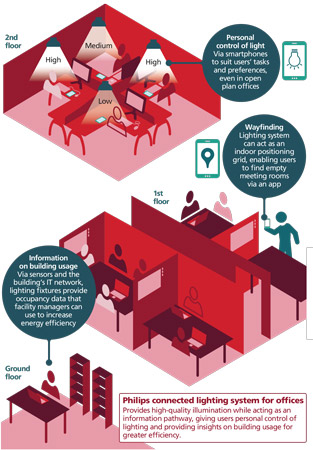 In an office of 200 employees, each working at a desk, the annual electricity costs for the HCL luminaires that replaced the LED lighting fixtures rose from €7,000 to €9,000 ($7,790 to $10,000, approximately) but saw the 85% productivity level rise 1.15% - roughly equivalent to two more hours of output per month. There was also a 1% decrease in the number of sick days and the duration of employment increased by 12 months, reducing recruitment costs and the time spent for a new employee to reach full productivity.

In education, the study looked at a school with 1,000 pupils and 80 teachers. The annual electricity costs rose from €8,000 to €11,000 (approximately $8,900 to $12,240) when HCL was installed. Following installation, there was a 15% improvement in cognitive performance in some pupils and a 10% reduction in the healthcare and education costs of the 5.3% of pupils suffering from ADHD (attention deficit hyperactivity disorder).

The report assesses the extra educational costs per ADHD pupil at €6,000 (or $6,670), saving €600.00 ($667.00) per pupil per year. Staff also benefited. There was also an 18% improvement in efficacy for mental disorders, which had accounted for 11.7 sick days per teacher (as a result of stress and burnout) and employees' duration at the school was extended by two years.

Looking at the medical sector, the report carries the caveat that although several effects are expected, they are not well researched yet. This segment saw the biggest jump in annual electricity costs, rising €40,000 ($44,500) to reach €174,000 (approximately $194,000) with HCL in a hospital of 1,000 beds and 1,500 employees. Nearly half of the floor space (48,000m2) was relevant for HCL. The study found that capacity utilization increased by 1% to 76% due to improved wellbeing of patients, and the hospital being a more attractive proposition for new patients.

Treatment times were reduced, leading to a 0.25% decrease in treatment costs and 0.25% reduction in medication costs, which was attributed to higher drug efficacy. There was also a 1% drop in staff sick days, which - like the school - had averaged 11.7 days per employee. Here, too, staff stayed two years longer than before HCL was installed.

For Dieter Lang, principal key expert at Osram, HCL thrives on innovative design. "HCL can be based on the creativity of lighting designers who understand how to combine and apply different available products," he said. An example of this is the Centre for Interdisciplinary Pain Therapy in Munich, Germany (Fig. 3). Osram's Novaluna modular ceiling lights emit glare-free direct and indirect light, reflected from the white interior walls. Fluorescent lamps are either 8000K or an atmospheric, warm white 2700K. A dimmable DALI (digital addressable lighting interface) version allows brightness levels to be tailored to the room's needs. Lunis 2 mini recessed downlights, meanwhile, are equipped with LEDs to accentuate a central zone. 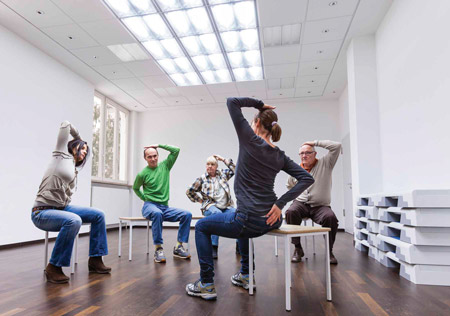 FIG. 3. Directional lighting and controllable brightness levels in Osram products are used in the Centre for Interdisciplinary Pain Therapy in Munich, Germany. 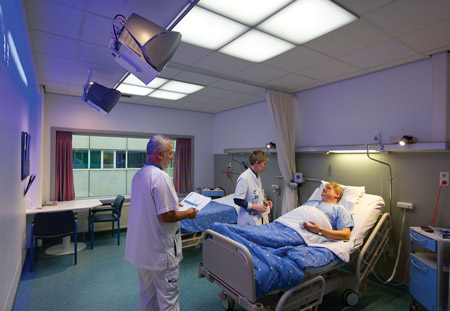 In retirement homes, it was capacity utilization that was the marked improvement as a result of replacing LED lighting with HCL. Annual electricity costs rose from €6,000 to €7,000 (approximately $6,670 to $7,780) and the capacity utilization rose 1% due to reduced medication levels, and a further 0.5% due to fewer accidents and attractiveness for new patients, although the study notes that these findings are highly sensitive to assumptions.

Already, HCL-based products have been installed in retirement homes and convalescent facilities. Philips Lighting, for example, has supplied its HealWell products that use connected LED technology to provide natural daylight indoors to aid patient recovery, and address sleep problems and jet lag (Fig. 4).

Lang described human-centric lighting as "a new philosophy, a new set of paradigms on lighting." He is optimistic about Europe's role in HCL: "Even if there are specific human-centric lighting products, HCL is primarily based on basic lighting design principles... While energy efficiency is considered as important all over the world, lighting quality is advanced in Europe. Therefore, Europe may be expected to be 'ready for HCL' first."

For de Stoppelaar, the only obstacle that may stand in the way of HCL market penetration is too much regulation. This could make things difficult, he warned, and may not allow the creativity needed. "We are at the beginning of a new era in lighting," he said, "with new companies, new players all able to extend the scope of lighting."

When creativity meets controllable lighting, it would appear the prospects for the industry could be boundless. That spells opportunity for the LED and SSL manufacturers and tangible benefits for people around the globe.

CAROLINE HAYES is a contributing editor with LEDs Magazine.