A multidisciplinary team including vendor Chromaviso and a group of “anthropological light designers” are tuning into the possibilities of boosting quality of life. 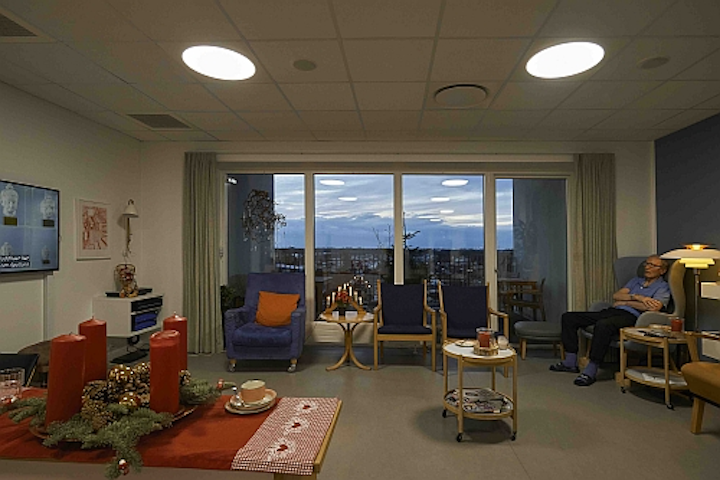 A multidisciplinary team including vendor Chromaviso and a group of “anthropological light designers” are tuning into the possibilities of boosting quality of life.

An elderly care home in Denmark is teaming with academic, industry and municipal researchers to determine whether a new circadian lighting system improves the health and quality of life of the center’s dementia residents.

The Plejecentret Albertshøj facility in Albertslund has installed lights that change color temperatures and brightness throughout the day, following the patterns of natural daylight. The system, from Danish supplier Chromaviso, turns on slowly in the morning, is at its brightest and most blue and cold at midday, and emits warm lighting in corridors and common areas at night, cutting out the blue frequencies that are known to suppress melatonin, a hormone related to sleep.

Many dementia sufferers have sleeping difficulties, sometimes because their circadian rhythms are out of balance with normal patterns honed by millions of years of human circadian entrainment under the sun. So-called circadian lighting such as Chromaviso’s could help balance their sleep cycles, and thus improve their health and wellbeing. The move from familiar domestic surroundings into a care home can compound their difficulties.

“Many of our elderly residents are moving into the care facility with some type of circadian rhythm disorder,” said Mona Funch, manager of the Albertshøj home, which is owned by the municipality of Albertslund. “This means that they do not sleep well and may feel tired during the day. This may impair their quality of life. With the installation of circadian lighting, we expect to be able to see a noticeable effect on the circadian rhythm of our elderly residents.”

Plejecentret Albertshøj — plejecentret is Danish for nursing home — is owned by the municipality of Albertslund, a suburb of Copenhagen which has been at the forefront of trialing modern digital lighting, as LEDs Magazine’s sister publication Lux has reported. 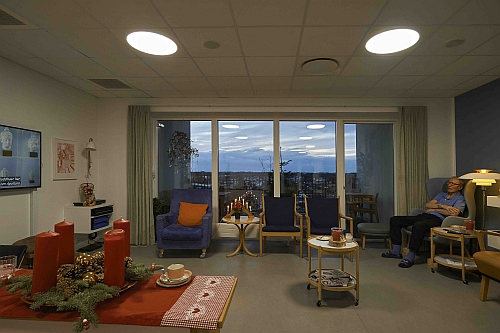 The Chromaviso circadian lighting system turns on slowly in the morning, shines its brightest and most blue by midday, and emits warm lighting at night. (Photo credit: Chromaviso.)

The project, called Lightel, is not the first of its kind. Among others: Osram two years ago installed tunable lighting at the St. Augustinus Memory Center in Neuss, Germany. And Britain’s Photonstar installed a circadian system on the dementia ward at St. Mary’s Hospital in London.

How can the right light make us healthier and happier? Find out at the LED & Lighting Network’s Lighting for Health and Wellbeing Conferences in Newport Beach, CA and London.

But Lightel is notable for its multidisciplinary approach. In addition to Chromaviso and Albertslund municipality, the team includes a clinical research center called Klinisk Forskningscenter out of Hvidovre Hospital near Copenhagen, known for studying the elderly and other areas of healthcare. Also onboard is a crew of what Chromaviso describes as “anthropological light designers” from Aalborg University Copenhagen; as well as Gate 21, a collaborative group of municipalities, companies, and researchers dedicated to green technology development

The entire project, including the lights, controls, study and management, is priced at €700,000 (about US$856,000), with the lead funding coming from an electric utility research group called ELFORSK. Albertslund is also ponying up some funds, as is a Gate 21 member called Lighting Metropolis. Hvidovre and Aalborg have provided some self-financing.

“We want to document whether circadian lighting is a welfare technology which works for elderly residents said Linda Andresen, laboratory and staff manager at Klinisk Forskningscenter. “Elderly residents are often fragile and have experienced a profound change from living in their own home to moving into a care facility. We examine whether circadian lighting may help improve their level of function or slow down its deterioration in order to strengthen the dignity and quality of life of the elderly residents and to facilitate their transfer to the care facility.”

Aarhus, Denmark-based Chromaviso itself has supplied many hospitals with circadian and specialized lighting for different purposes. It has outfitted a number of endoscopic operating rooms with lighting systems that help surgeons see better and thus cut down on mistakes. In other installations, it demonstrated that circadian lighting has reduced drug reliance at Aabenraa Psychiatric Hospital; and its lights have improved sleep patterns for trauma patients.

While Chromaviso has lit dementia centers to fight depression in the past, with Lightel at Albertshøj it is broadening its scope to try to improve general health and wellbeing.

“We have adapted circadian lighting to the dementia area to ensure that circadian lighting supports the residents’ welfare, the employees’ work, and the activities of the care facility day and night,” said Torben Skov Hansen, innovation manager at Chromaviso.

“We expect our elderly residents to do better when they sleep at night., and that their ability to concentrate will improve and that they will be able and more willing to take an active part in everyday life,” added Albertsøj’s Funch.

Denmark is a hotbed for circadian lighting and studies. Lux recently reported that a circadian system from Danish company Lightcare cut aggression at the Esbjerg Psychiatric Hospital, a result similar to Chromaviso’s at Aabenraa in Southern Denmark.

Hospital and care settings lend themselves to circadian lighting studies, because they tend to be equipped with health monitoring technology. Circadian lighting, also known as human-centric lighting or lighting for health and wellbeing, is also beginning to take root in the workplace, where it will be more difficult to measure physiological effects but where properly tuned lighting is expected to improve employee morale, performance, and health.

The science of circadian lighting is still evolving. In a recent surprise finding, the Lighting Research Center (LRC) at Rensselaer Polytechnic Institute in Troy, NY noted in a small study that blue light from Apple iPad screens was no less likely than warm iPad light to disturb sleep when used late at night. The study concluded that screen brightness was more of a factor. LRC is among the many groups that has indicted blue for suppressing melatonin, so the results seemed to clash with earlier findings.

Keep an eye on LEDs Magazine for more on the subject.