The latest addition to its IPS stable uses Bluetooth rather than visible light communication. 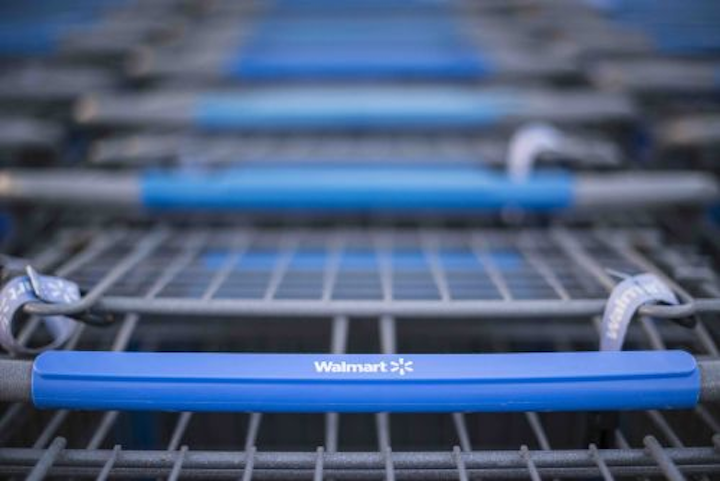 By tracking shopping cart movement around a store, retailers can get a better understanding of customer behavior. Acuity did not reveal the names of users of its new asset tracking system. The company is believed to already be working with Walmart and Target on people-oriented indoor-positioning services. (Photo credit: Walmart.)

The latest addition to its IPS stable uses Bluetooth rather than visible light communication.

LED lighting vendor Acuity Brands has added another arrow to its quiver of indoor-positioning technology, introducing a wireless system that tracks shopping carts around stores in order to provide retailers with information on floor traffic and also to keep tabs on the carts' whereabouts.

The system uses Bluetooth Low Energy (BLE) chips attached to the shopping cart, and BLE beacons embedded in the ceiling lights. Carts and lighting fixtures communicate with each other over Bluetooth radio frequencies. The new system does not utilize visible light communication (VLC), a lighting-based scheme that Acuity uses in other instances. VLC embeds data in LED lightwaves and communicates with shoppers' cellphones. Acuity did not announce customers.

“In today’s ultra-competitive retail environment, retailers need every advantage they can get to create exceptional in-store customer experiences while optimizing costs,” said Greg Carter, vice president of Acuity Brands Lighting's IoT business unit, when it first showed the shopping cart system last month at the Shoptalk retail trade exhibition in Las Vegas. “Our new asset tracking capabilities are the latest improvement to a full suite of IoT and indoor-positioning technology that forms the foundation of a robust, but scalable, in-store analytics and decision solution with built-in payback.”

Atlanta-based Acuity is a pioneer of lighting-based indoor positioning systems (IPS), and is possibly the world's leading deployer. It now claims to have installed a combination of VLC and BLE-equipped lighting in nearly 50 million ft2 of retail space, up from 40 million it reported in January. Most of its installations are in the US. It has not publicly identified a single customer. The company is believed to be piloting projects at more than 100 Target stores, and to also be supplying Walmart. 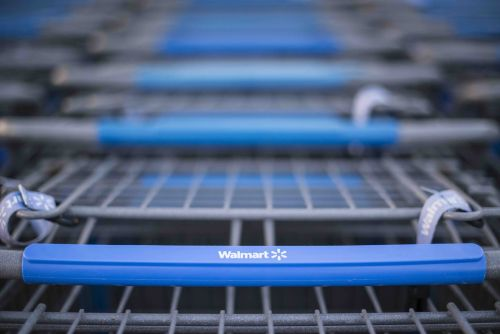 By tracking shopping cart movement around a store, retailers can get a better understanding of customer behavior. Acuity did not reveal the names of users of its new asset tracking system. The company is believed to already be working with Walmart and Target on people-oriented indoor-positioning services. (Photo credit: Walmart.)

By tracking shopping cart movement around a store, retailers can get a better understanding of customer behavior. Acuity did not reveal the names of users of its new asset tracking system. The company is believed to already be working with Walmart and Target on people-oriented IPS. (Photo credit: Walmart.)

Its installations to date have focused on sending information such as in-store directions, promotions, and discounts to shoppers' phones.

The new shopping cart system marks an additional means for retailers to deploy IPS. Acuity calls it asset tracking, and points out that it does not require consumers to use their phones to download apps or to opt in — all processes that can stymie IPS adoption. Rather, the new scheme is an anonymous one that directly tracks carts, and by inference, the people pushing them.

“Now retailers have a solution that's not just limited to phones,” said Dan Ryan, Acuity's vice president of product management for IoT, in an interview with LEDs Magazine. “It's a good way for retailers to get a heat map of the activity around the store.” Store managers can use the information to decide how to rearrange aisles and promotions and to alert them in real time of long lines at the checkout counter. Or they can use it simply help them figure out whether they are carrying too many or too few shopping carts, or if they have lost any.

The use of Bluetooth technology versus VLC raises the question of why retailers would purchase an IPS system from a lighting vendor such as Acuity, as opposed to procuring from a more conventional information technology vendor. While VLC has more obvious connections to the lighting industry, Bluetooth is a technology that comes with an IT industry heritage, and might therefore prompt any interested retailer to purchase from IT channels.

“It's a challenge for the lighting industry in general,” acknowledged Ryan. “I view it as a go-to-market challenge.”

Ryan said lighting-based Bluetooth systems can be superior because they include beacons in a store's many ceiling luminaires and thus provide more dense coverage than, say, the far less frequent Wi-Fi routers that an IT company might use. Ceiling-embedded Bluetooth beacons can also draw on the same electricity power supply as the LED light itself. Some IT-oriented schemes by comparison rely on battery-powered beacons, which can be problematic as batteries eventually drain and have to be pinpointed and replaced.

Acuity is expected to reveal further technology moves at the LightFair International exhibition in Philadelphia in early May.

Across the industry, lighting-based IPS has been slow to take off, some three years or more after big vendors starting promoting it. Acuity's 50 million ft2 would translate into roughly 300 stores — an admirable showing, but a dent considering that Walmart alone operates about 11,700 stores. And it's difficult to gauge just how active or successful the installations are, given that Acuity will not identify the stores that are using the technology.

Other vendors such as General Electric (GE) and Philips Lighting have been talking about IPS for several years. Outside of Acuity's enigmatic 50 million ft2, however, the industry is basically characterized by a few pilot installations, such as recent deployments by Zumtobel at an E.Leclerc outlet in France, and by Philips at an EDEKA Paschmann branch in Germany.

The technology is now showing signs of catching on. But one theory for the slow growth to date is that VLC, for all its merits, can be a cumbersome technology that requires users to constantly keep their phones out and pointing up at shop lights, because VLC requires line of sight whereas the radio technology of Bluetooth does not.

That could be the reason why Philips, an early champion of VLC, is now bringing Bluetooth more into its IPS mix. Likewise, industry giant Osram is relying heavily on Bluetooth as opposed to VLC. For example, it is selling Bluetooth technology to a Swiss fashion chain for installation at 23 stores in Switzerland, including Guess and Marc O'Polo.

Acuity's Ryan said both VLC and Bluetooth have their place. One advantage of VLC is that it provides much greater accuracy than Bluetooth, as VLC can guide shoppers to within 10 cm of a product. And by using VLC, stores can simply use the lighting equipment without having to add Bluetooth gear. They can also help to pay for deployments by drawing on energy savings from the LED lights that go hand-in-glove with VLC systems, he noted.

Like Philips, Acuity was an early champion of VLC technology. It purchased Ryan's former company, a VLC specialist called ByteLight, in April 2015. ByteLight had been working on VLC projects with GE prior to the Acuity acquisition. Acuity now uses VLC technology from Qualcomm called Lumicast, rather than using the ByteLight VLC. Ryan said the former ByteLight operation — now folded into Acuity — has helped integrate VLC and Bluetooth into one system.

Other issues that could be holding back IPS include concerns over individual privacy and data protection. It's also not yet clear whether retailers and consumers really want it.

Acuity, meanwhile, will continue to try to drive the technology forward. Most of its activity at the moment is in the US. It could soon make a move to expand in Europe.