In a nod to privacy, European electronics retail giant Media Markt provides navigation only at its huge four-story shop in Eindhoven. Meanwhile, the VLC versus Bluetooth debate continues. 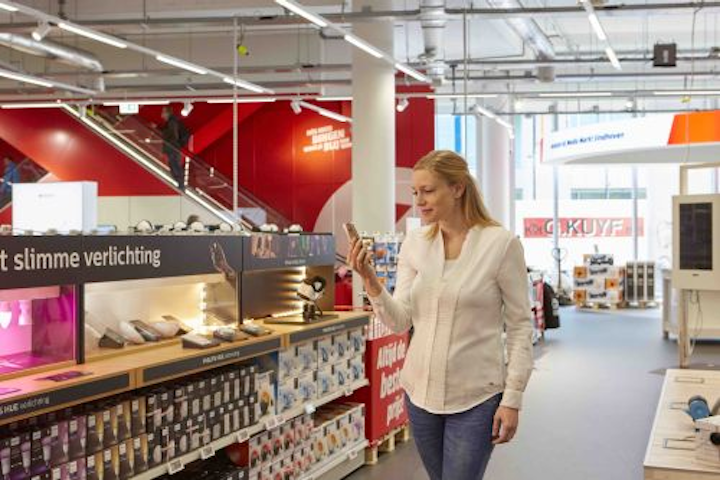 In a nod to privacy, European electronics retail giant Media Markt provides navigation only at its huge four-story shop in Eindhoven. Meanwhile, the VLC versus Bluetooth debate continues.

When the sprawling, four-story Media Markt computer and electronics store re-opens in Eindhoven, the Netherlands this week, its refurbishment will include LED ceiling lights that transmit information to help smartphone-equipped shoppers find their way to different goods, using visible light communication (VLC) from Philips Lighting.

While the installation has more of a showcase feel about it than a full commercial implementation — it's situated on the home turf of Eindhoven-based Philips Lighting and is just one store out of more than 800 in the Media Markt chain — it marks the latest sign that lighting-based indoor positioning systems (IPS) could be slowly picking up momentum as vendors figure out exactly which features users want, and how to deliver.

The lighting industry has been talking up IPS for around four years, but until recently it has made few announcements of actual deployments. It has been wrestling with privacy and security concerns. It also has been figuring out whether to use lighting-specific technology such as VLC, which embeds information in lightwaves emitted by LED lights, or whether to use more dyed-in-the-wool IT technology such as Bluetooth. 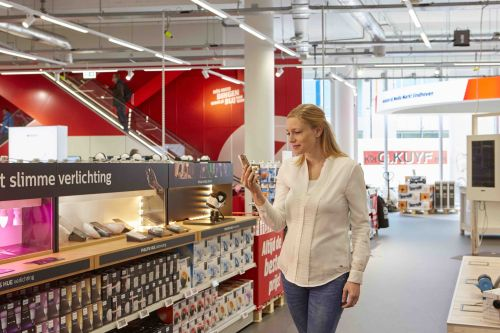 The Media Markt app uses information sent from the lights to help guide users up, down, and around the store. (Photo credit: Philips Lighting.)

The 4800-m2 (51,667-ft2) Eindhoven store is using VLC. Newly installed Philips LED lights embed information into lightwaves that reach users' smartphones. The information then appears in the form of a map and directions on the smartphone screen, guiding people to the myriad computers, cameras, games consoles, phones, coffee makers, and other Media Markt staples. The system makes use of mapping software from St. Louis-based Aisle411, and requires users to download a Media Markt app called Store Guide onto either Apple or Android phones.

In a nod to privacy and security, Philips and Media Markt are limiting functionality to straight-up navigation, rather than offering personalized promotions often associated with the IPS concept. Media Markt does not tie Smart Guide into the shopper's loyalty scheme or purchasing history. Such integration could, for example, ping a digital camera promotion to an in-store shopper who might be standing in the computer section and who has a history of buying photography products.

“The installation is navigation only,” a Philips spokesperson told LEDs Magazine. “The lighting-based indoor positioning solution has no inherent way of identifying the customer; it provides an accurate position only. This is sufficient to provide most location-based services, such as location-specific advertisements.

“If a retailer would like to offer more personalized services, the Philips Lighting system requires them to resolve this in the customer’s app — for example, by an opt-in mechanism that allows shoppers to agree on sharing personal information in exchange for a better shopping experience. The Store Guide app has no link to the Media Markt loyalty program.”

Some observers question whether in-store shoppers truly want to look at their phones to learn the location of an item. Philips Lighting's head of indoor positioning Gerben ven der Lugt insisted that it is “one of the primary reasons for customers wanting to use a store app.”

"Media Markt is at the forefront of innovation when it comes to customer service and technology," said Gordon Scholz, CEO of Media Markt's Netherlands group. "The Store Guide app fits the bill perfectly. Through indoor positioning from Philips Lighting, we facilitate an inspiring, fun, and convenient shopping experience for our customers."

Media Markt is a €21.9 billion ($23.8 billion) Ingolstadt, Germany-based operation with more than 800 locations in 14 countries. Philips said the chain is using a second Philips IPS store at its outlet an hour away in Arnhem, where like at Eindhoven, it is limiting functionality to non-individualized navigation. Philips said the installations tap its Maxos Fusion LED trunk lighting and its GreenSpace Accent Projector accent lighting.

Although the Arnhem and Eindhoven sites both use VLC, Philips has recently started to also promote Bluetooth for IPS in certain circumstances.

VLC and Bluetooth each have their advantages. Philips says VLC provides greater accuracy, with the ability to pinpoint a product to within 30 cm (less than a foot) compared to Bluetooth's 2–3m (up to 10 ft). It can also allow a retailer to make use of an existing and ubiquitous infrastructure — lighting. However, it requires users keep their phones pointed at the lights. Bluetooth can successfully send signals to the phone even if it's tucked away in a pocket or handbag.

Philips has also noted that Bluetooth can be preferable in locations where there is a lot of natural light — such as in a mall with atriums and skylights — which minimizes the need to turn lights on and thus minimizes the opportunity to use VLC.

The Bluetooth option raises the question of why a lighting company and not an IT company should supply it. LED lighting vendor Acuity Brands has noted that lighting-based Bluetooth provides more thorough coverage than when IT companies scatter beacons around a store, because lighting companies can include a beacon in each luminaire. They can also power the Bluetooth beacons with the electricity supply that feeds the luminaire rather than relying on problematic batteries.

Acuity uses both Bluetooth and VLC. It is believed to the world's largest supplier of lighting-based IPS, which is part of the Internet of Things (IoT) movement. Acuity claims to have deployed in over 50 million ft2 of retail space, although it has never revealed the name of its users. Both Walmart and Target are believed to be piloting Acuity technology.

The frequency of IPS announcements has been picking up recently. Earlier this year, for example, Philips disclosed a VLC deployment at an EDEKA Paschmann store in Germany at the same time the Zumtobel Group announced a Bluetooth installation at an E.Leclerc store in France. Osram also recently announced an implementation across 23 fashion stores in Switzerland.

*Updated Apr. 25, 2017 at 9:25am Eastern to include additional information from Philips.